After last week’s romp, this week’s double header of episodes was more serious and action-packed. All the plot threads are finally coming together as we approach what might be the last three episodes of the series.

The first episode opens where the last left us — Dr. Jason Wilkes is fading away. Peggy helps him come up with a plan to contain himself in a physical form. But first, he’ll need a little bit of zero matter — which means Peggy has to get some from Whitney Frost’s blood. Sousa rightfully points out that she’s too recognizable to get anywhere near Whitney at her husband’s fancy fundraiser, but they need someone to be Jarvis’s date.

Peggy does what anyone would: She calls in Russian spy Dottie Underwood, helping her temporarily break out of prison. Peggy explains that they’re taking down the same people Dottie was after in the season premiere, but Dottie warns Peggy that no matter what Peg plans, she’s going to get away in the end. Peggy and Sousa trap Dottie in a taser net (the SSR apparently loves tasers), but they’re biting off more than they can handle.

Meanwhile, Chadwick tells Whitney that at his fundraiser she can finally meet the Council. She’s excited that they’d even deign to speak to a woman. It’s clearly a trap, but I guess Whitney actually does love her husband and wants to believe  in him.

At this fundraiser Dottie and Jarvis are tearing up the dance floor when they spot the SSR’s own Jack Thompson. Dottie runs off to get the blood — though not before making a remark about how gross the decadence is to her Communist sensibilities — while Jarvis distracts Thompson. Jack tells him he didn’t realize this is the sort of party butlers get invited to, which is rude, and then leaves to try to figure out where Peggy is.

Dottie gets the blood and then secretly watches Whitney’s meeting with the Council that is Hydra. Whitney reveals her powers to the assembled men with a lab rat she brought with her, because at heart she is still a nerdy science girl. The men are impressed, then immediately capture her. Instead, she eats up the guards, the extraneous members of the council, and finally, her husband. She tells the remaining council members that she chose them because they can help her on her quest for unlimited power. They quickly go along with this, and run off to tell Vernon Masters. There’s no loyalty in not-Hydra, except to the one with the biggest gun/quantity of zero matter in their body.

Meanwhile, Peggy and Sousa are outside in a van, supervising the mission. Peggy spends the episode in visible pain, since she got impaled the day before, and Sousa tells her that it’s hard to admit when you can’t do something, speaking from his own experience. It’s touching. Then he tells her that Violet broke off the engagement because she thinks he’s in love with Peg, and they almost kiss. But Dottie throws a guy out of a window and onto their truck, and the moment is gone.

Whitney’s people capture Dottie, but not before she leaves the vial of blood on the ground for Jarvis to snatch up. Dottie and Peggy’s weird mutual respect for each other is a great dynamic, and I’m glad this season got to explore it. Masters, meanwhile, orders Thompson to destroy Peggy’s credibility. In the next episode, he meets Peggy at the Stark mansion to convince her to come to New York with him, and she declines. Is Thompson really on the side of evil, or was he really trying to help Peggy out? I hope it’s the former.

Which brings us to the second hour. It opens with a magnificent Whitney Frost press conference, where she explains that her husband and his associates died in a boat accident, which must have sounded less suspicious in the 1940s. Meanwhile, Masters tries to interrogate Dottie. Tries. She explains that anything he could do to her, she’s done worse to herself. Whitney takes over — in that she fills Dottie with zero matter then pulls it out — and Dottie tells her Peggy’s plan. That zero matter stuff really must be painful.

Peggy, meanwhile, is trying to figure out how to get Dottie back, and Jason gets mad that she’s focusing on her instead of helping him. His anger is justified, but it only further fuels my theory that he’s untrustworthy. Eventually, with Jarvis and Ana’s help, he gets the machine running and he gains a physical form. It doesn’t help his “I’m a good guy” case that he looks like a 1960s-era Batman villain in the contraption. It also doesn’t help that as soon as he is physical he kisses Peggy. It felt too aggressive

I got through almost this whole recap without mentioning the MIA character who decided to make an appearance — Ana Jarvis. She spends 90 percent of both of these episodes worrying that her husband will get injured, which is the biggest foreshadowing of doom there could be. But she feeds Jason while Peggy and Jarvis go off to try to save Dottie.

In the car, Peggy and Jarvis discuss the love triangle she’s found herself in the middle of with “two quality suitors.” Jarvis perfectly straddles the line between protective and teasing here, which is a nice shade to their relationship. If Peggy ends up with one of them, I hope it will be Sousa. But I don’t think Peggy will get a chance to choose, because either Sousa will die or Jason will cross to the darkside.

Sousa, meanwhile, is dealing with his own Masters problems, since Masters orders him to find the war heads stolen from Roxxon (the war heads that our heroes stole, of course). Sousa refuses and masked goons break in and attack him that night. When he hobbles into work the next day, he still won’t tell, and is quickly deposed. Masters is the new L.A. chief — what possible could go wrong?

Peggy and Jarvis’s rescue plan also goes south when Manfredi’s goons capture them. In the basement with Dottie, she teases them about the uselessness of their rescue op, but they eventually break out, only to realize that this was a diversion so Whitney could get to Jason.

Whitney approaches Jason in his containment machine and tries to pull the zero matter out of him. Instead, he pulls some from her, which strengthens his material state, and he exits his container. Whitney notes that it’s interesting that the zero matter affects everyone differently, which I mention because my brother put forth a theory last week that the zero matter is the alien force that (spoiler!) has inhabited Ward on “Agents of S.H.I.E.L.D.” I’m not sure I believe it, but thought it was worth mentioning. Anyway, Whitney tries to convince Jason to join her freely — they’re both smart and oppressed by society and can change that together. Jason refuses, so Manfredi, Whitney’s personal goon, takes him by force. Ana sees them carry Jason to the car and tries to stop them. Manfredi shoots her as Peggy, Jarvis, and Dottie pull up to the house. They rush her to the hospital where Dottie runs off. Ana’s life hangs in the balance as the episode ends, which seems a little unfair since Peggy got impaled two days ago and is doing pretty OK.

Last week, news broke that Hayley Atwell, who plays our title heroine, was cast in an ABC pilot, and the Internet speculated that this means the demise of Agent Carter. That would be disappointing for a lot of reasons, including that it would squander all the great world-building from this season. We’ve got mobsters, oil tycoons, possible Hydra operatives, and Communists. They can only live in this little Agent Carter world, and I want to see more stories with them. 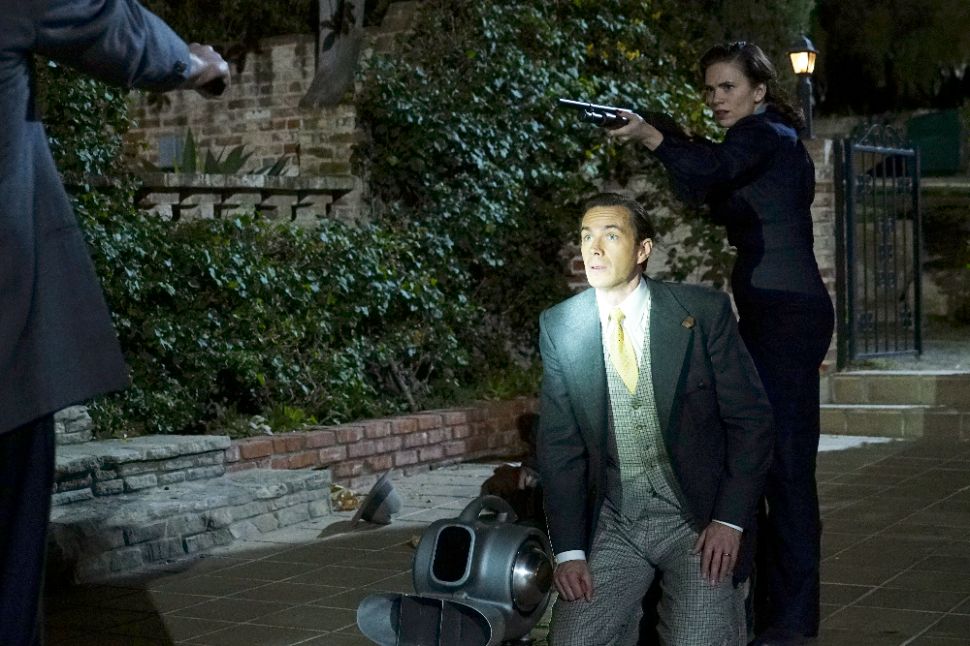