[youtube https://www.youtube.com/watch?v=2Cn3DVV0LHY] Trailer #2 for Marvel’s Daredevil season two dropped today, and it is filled with countless one way tickets to board the hype train. Elodie Young’s Elektra Natchios is here, and not only is she a badass who spin-kicks equal if not more criminal face than Daredevil, but fire up your Tumblr-engine because Matt and Elektra get. it on. Stick is back and telling Matt to talk to the Hand, which is unfortunate because the Hand is an ancient order of ninja-criminals that worship a demon. Plus, Foggy is worried, Karen is concerned, and Jon Bernthal’s Frank Castle is in the background of it all sniping dudes in the head.

Oh, how times change. Just 10 short years ago, Elektra was fighting Ben Affleck in a public playground, and her standalone film became shorthand for the reason studios wouldn’t get behind comic book movies. Now, Ben Affleck is Batman, comic book films are most likely the last six movies you saw in theaters, and the name Elektra is worth more than a 10 percent score on Rotten Tomatoes.

We got our first hint of an Elektra appearance on Daredevil in an off-hand comment from college-aged Foggie, about a “Greek girl” Matt used to date. In comic book canon (the only canon that matters, depending on how often you leave your house), Matt and Elektra did first meet at Colombia college, in an incident where Matt followed Elektra’s scent into a park and got arrested for trespassing. I don’t know. Comic books are weird, man.

Like all good comic characters, Elektra has a past dotted with a minimum of one savagely murdered parent, anger issues, and extensive martial arts training as a young child. Like Matt, Elektra trained under Stick. ALSO like Matt, Elektra was sent away by stick by being too emotional (something about seeing her parents gunned down by assassins blah blah). After a brief siesta with The Hand (more on them below), Elektra fled to Japan, became an assassin, and eventually given a job in New York, where she crossed paths with an old flame who happened to be dressing like a devil and leaping off rooftops at the time.

Daredevil seems to be keeping Elektra’s Japanese ties intact, because she’s got “information” on the Yakuza Matt thought he wiped out in season one. The trailer does a fantastic job of showing off Daredevil and Elektra’s teamwork dynamic, which is basically Matt asking her not to kill anyone, and turning around to see Elektra sticking a Sai into someone’s eyeball. The question is, even though the Jason Statham as Bullseye news fell flat, will Bullseye show up anyway? Because Elektra and Bullseye have history, and it…well it just doesn’t end great for anyone.

We get a brief glimpse of a bar emblazoned with the words “Dogs of Hell,” which unfortunately does NOT refer to the 1983 movie where a pack of military-trained rottweilers take over a small mountain resort. Not all news is good news.

What it DOES refer to is a biker gang based out of Nevada, that seems to have made its way to Daredevil‘s New York City. All six Marvel’s Agents of S.H.I.E.L.D fans will know the club first appeared on the ABC series. In a decidedly un-Daredevil-like storyline, an Asgardian named Lorelei enthralls the leader of the gang, a dimwit named Rooster. I doubt we get a Thor appearance on Netflix, or even a Sif appearance, and not even an Agent Coulson cameo (is he even alive in the Netflix universe?). But IMDB does list a single actor playing a “Dog of Hell,” and I wouldn’t be shocked if there was a real subtle Rooster reference sewed on to his jacket or something.

Or a pack of military-trained rottweilers take over the bar. I don’t know. TV is weird, man.

The Hand should not be confused with The Foot Clan, although if Netflix is doing a dark, gritty Ninja Turtles series I expect a call. But no, The Hand is…well how much time do you have? The abbreviated version of The Hand looks like this: In 1588, a group of people broke away from feudal Japan and went into the mountains to learn how to kick people super hard in the face. That worked out well, until the Hand was co-opted by the Snakeroot, a group that worships a demon named the Beast. That worked out less well. The Hand’s main adversary is the Chaste, which is led by Stick, and a bunch of other guys with one-word names. Like Stone (who might have shown up last season), and Shaft. No, not that Shaft. This dude uses a bow and arrow.

A ton of different Marvel characters have headed up The Hand over the years, including last season’s big bad Wilson Fisk, and Daredevil himself (long story). Since Fisk is in jail staring at the wall, and Daredevil is a little busy right now. It’s worth mentioning that Nobu wore a pretty standard Hand uniform last season, but Nobu burned to death…

The trailer built up this unmasking enough to assume it’s important. Whoever it is, he’s holding the sweet sword-rope (the technical term I’m sure) that Nobu used in a fight against Daredevil last season. And it makes sense, horrifying flame-death aside. One of the fun parts of being a Hand member is the occult magic you learn, which allows you to bring people back from the dead as a new member of The Hand. So there’s a chance under that mask isn’t someone new, but a Freddie-Krueger-looking Nobu.

OR, it is a new character, in which case it’s time for BASELESS SPECULATION. Maybe its Junzo Muto. Or, fuck it, Wolverine has a new movie to promote. Or maybe it’s not even a villain at all. I mean, that guy up there is wearing some pretty cool gloves. Maybe they’re necessary, because all his power is in his hands. Or, say, his fists. His fists…that are hard…as IRON.

Or it’s just Nobu. Either way.

Not much to report here. It just looks like Matt Murdock’s Daredevil costume is officially going full comic book, with his classic billy clubs that double as a grappling cable. Now if he could wear the yellow suit for the entirety of season three, then we’ll know Netflix isn’t playing around. 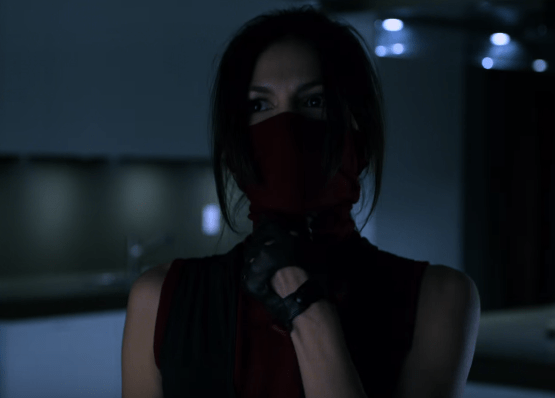