In the moments of transition between primetime campaign coverage, you may have heard some strange sounds coming from the Bernie Sanders rallies. Funk music. Soul music. The warmth of live mixing and scratching. All a far cry from the sanitized, staff-sanctioned playlists of other campaigns. There’s a man on those decks, playing the classics, and he’s doing it for free. Meet Mel, a world-renowned, Austin-based DJ who got his start playing for Obama’s re-election night, and has been elevating the political music game ever since.

‘If I hear Pharrell’s “Happy” one more time, I’m gonna kill somebody.’

When CNN cuts to the crowd at these Bernie rallies we hear the music, and you’re not playing that Hilary Clinton favorite, “Fight Song.” You’re not playing the Top 40, easy, super-radio-friendly candidate-approved songs. I get the vibe that your tastes are a little more all over the place.

It’s funny that you say that, because when we were in Iowa last week this camera man came up to me, from one of the major networks. I was just playing soul and funk, Jimmy Ponder and real chilled-out stuff. So the cameraman came up to me, I guess they had a moment when they weren’t on the air, and he just said, “Dude, this is what I listen to at home. I love this stuff.” And he goes, “If I hear Pharrell’s ‘Happy’ one more time, I’m gonna kill somebody.” I think it’s just been on loop with Hillary’s camp. And I just started laughing.

(Laughs) Yeah! Maybe it’s always been like this, but everyone is kind of jaded in their own way. So when you have something pushed on you, especially something about being happy, you just wanna say “stop.” You know what I mean? People have the same reaction when they hear that Bobby McFarin song, “Don’t Worry, Be Happy.” When people hear that, they wanna knife somebody!

There’s this larger conversation buried here about today’s media, too, and how we’re always being fed the same shit. I think there’s been an awakening recently, largely instigated by Bernie’s campaign. But even when you watch a streaming service and see the same ad, tailored to you, playing over and over again ad nauseam. As the public I wonder if we’ve reached this saturation point where we see through it. We know when we’re being told or led to feel a certain way. The seams are starting to show. One of those things seems to be this negative narrative about the Bernie youth, the Bernie Bros and the Dank Meme stash and all this. Talking to you, who’s very much tapped into the vibrancy of that culture, is the negative narrative accurate? Are these rallies just full of bros? What are you seeing?

From what I’ve seen, Sanders has the youth vote by a lot. And it goes back to what you’re saying about the seams showing. We’re just way more aware, now more then ever. Older people who were around at a time when there were only three major networks were being fed the same stuff and are believing it, but now there are so many channels and resources to get your information. You can get an opposing opinion, and maybe you can find something truthful online. Or maybe I’m being naïve.

Raking through the muck.

Yeah, and as far as the music’s concerned, the people from the Sanders camp and those who support Bernie don’t wanna hear “Happy,” these Clorox bleach songs that have been sanitized. And it’s not like I’m trying to be this elite record-store nerd from behind the counter!

‘From what I’ve seen, Sanders has the youth vote by a lot.’

I think it’s the opposite of that. It’s about playing music that really connects with people. Like George Clinton. I heard you play “Not Just Knee Deep” in Iowa on CNN. When Mr. Clinton and I spoke over the summer we got into this whole dialogue about him trying to get back control of his publishing rights and all that. So when I hear the song on CNN, there’s this music nerd wink happening about his struggles to not be screwed over by the larger socioeconomic grip on his balls.

And then when you play Bowie’s “Starman” as Bernie leaves the podium, I think the same thing about a connection between the song and the scene. Are these connections things you think about when you make these playlists? Are you instigating a lot of these creative choices? Is Jane Sanders coming to you with Grateful Dead playlists?

No, no, not at all! [laughs] They gave me a folder of 30 songs that they liked, and said they were just options, that I could play whatever I want. They said, “For the most part, we want you to do what you do.” I don’t think the whole process of voting and doing your civic duty needs to be such a heavy, stiff thing. Like going to the dentist or something, you know? Sometimes they play terrible music in there and you’re thinking, “Not only am I gonna have this guy digging in my face, but I’m hearing the worst music ever.” The music becomes the soundtrack to that process.

Are the campaign staffers coming to you with feedback?

Yeah, they’re so awesome. Early on in Iowa I was playing music really low, while the press was getting situated and people were filing in. They were like, “You’re playing Zapp right now?! You’re playing that song that Dre sampled in ‘The Next Episode?!’ ” They were just so about it. They’re not all younger, but everyone there was completely in touch.

You’re doing this for free?

Yeah, I mean, I don’t want any money from it. I just think this is an honor. Even when I did stuff for Obama, I never asked for money.

It’s a campaign contribution in of itself.

Yeah. I believe in Bernie, and I believed in President Obama when I played for him back in 2012 and up until now. Money isn’t even a question; I am there.

What do you make of how you got into this political DJ thing? I heard you have a friend who worked at the White House and he just hit you up. Did they tell him they needed a DJ and he thought, “I know just the dude”? Can you talk a little bit about that?

I know this guy that works for Obama, he does events work and production for the president. And he’s actually consulting for the Bernie Sanders campaign. My relationship with this guy is that he’s a music nerd just as much as I am, and I love him to death because we could just nerd out and talk about dub for an hour. With my friend who worked for Obama, it was one of those things where I would always just mention to him how much I would love to meet the president. I didn’t care about the photo, I just wanted to meet him.

‘I don’t want any money from it. I just think this is an honor.’

Then in fall of 2012 he calls me on a weekend morning, I was still asleep and he woke me up. He asks me if I want to play for Obama in Chicago on election night. And I was there. That was just nuts because people had the same reaction you had the other night, where it was like, “Holy crap, I’m hearing George Benson songs or whatever it may be at Obama’s HQ!” People were just trippin out because they never expected to hear someone mixing and scratching.

In your role as party agitator though, how does that work? How do you get the crowd lit at a rally the same way you would at a warehouse show?

It’s kind of the same thing, because people are so hyped already. There were 20,000 people on Obama’s re-election night, and they were hyped without any alcohol. Their president was about to be re-elected! I was just looking at that crowd and thought, “I know what I need to do here.” As soon as I figured it out, it was over. Not to sound hokey, but you can feel people’s energy. So it was on. With Obama, I knew the vibe, I knew what to play. With Bernie in Iowa, I had to feel it out. Because it’s Iowa, you know? I’ve never been to Iowa. I don’t know what these people are into. Then after a while I just thought, screw it! I’m just gonna play like I’m playing a party.

You were! A political party.

Yeah! It worked well. Sometimes I think I have to get over myself, because if I play a Rob Bass song, you know, which I was scared to play because I don’t know how it would have went over! But it’s a fun song, everyone likes that song, and it’s so innocuous. But then again, it’s a hip-hop song at a political event. But you know what? It went over well and I was just overthinking it. But you do have to be mindful of where you are. If it was my show here in Texas I’d be playing Future and Crimemob, stuff to get people wildin out, swinging from the light fixtures. But there’s definitely a time and place for that.

Your cross-genre playlists are interesting to me because I listen to the songs the other campaigns are playing, the Twisted Sister song and that “Fight Song” and “Happy.” They’re very safe and in flux with each candidate’s electorate. But Bernie’s pulling in all these varied and new voters who look different and like different things. I think your music is very emblematic of that. Do these other candidates even have DJs?

I don’t think so. Without any hesitation, I’ll tell you I’m a music person, since I was a little kid. Always bought records, always been up to my neck in it. So with that said, I think people who aren’t don’t actually know the importance of music. But everyone loves music. Doesn’t matter where you’re from, what school you went to, what color you are and how much money you make. I don’t think these other candidates fully grasp the importance of music. It’s obvious, listen to what they’re playing!

…It’s like the most delicious cup of coffee ever. It tastes so good, and after that you’re just amped. We’re on the road a lot and going to these chain coffee places, grabbing coffee just to wake up. But every once in a while you go to a real coffee house, order one and just think, “Oh my God.”

Yeah. He’s that amazing cup of coffee and that feeling you get 15 minutes after your first sip where you think, “Oh man, I feel it.” 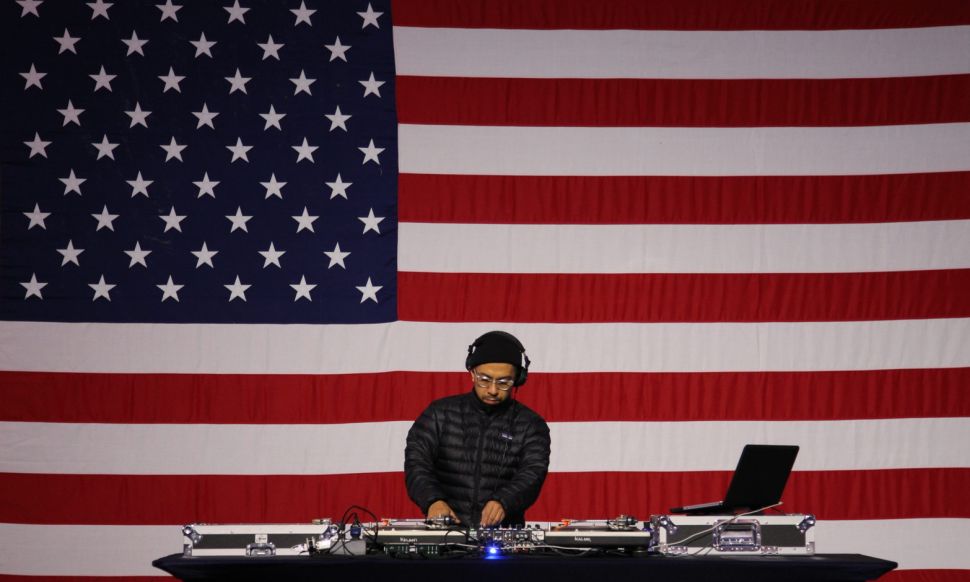