On February 11 at 10:30 a.m., the National Science Foundation held a press conference in collaboration with scientists from CalTech, MIT and the LIGO Scientific Collaboration, to announce the detection of gravitational waves using the Laser Interferometer Gravitational-wave Observatory (LIGO).

In 2014, scientists thought they discovered gravitational waves at the South Pole, but the findings were retracted as the wave signals were formed by cosmic dust.

This time, results were detected by devices specifically built to look for gravitational waves—one in the United States (LIGO), and another in Italy (VIRGO), have searched for these waves for years. The findings were produced by two black holes billions of light years away, both thirty times the mass of the sun. The recorded sound of the gravitational waves provides a new way for scientists to observe the universe—not just visually, but through audio as well.

In 1915, Albert Einstein hypothesized the existence of gravitational waves, and until now scientists have only been able to infer their existence through calculations. Einstein believed we would never be able to see gravitational waves because they move at the speed of light, rippling through space and time as they move.

“They’re waves, like light or any other kind of electromagnetic radiation, except here what’s ‘waving’ is space and time itself,” NASA astrophysicist Ira Thorpe, with the Goddard Space Flight Center in Maryland, told Reuters. “You get radiation, basically light, when you move some sort of charged particle. When you’re moving masses, you get gravitational waves.”

Proof of the existence of gravitational waves could have profound impacts on our understanding of the universe, potentially unlocking the ability for researchers to learn more about objects too distant or difficult to otherwise study.

‘Of course we don’t know, but some people believe perhaps there was an umbilical cord that connected our baby universe to a mother universe.’

“This is the first direct indication of Einstein’s theory of gravity waves, and I think it’s probably worth a Nobel Prize. The next Nobel Prize for Physics will probably go to the physicists behind this project,” said Theoretical Physicist Michio Kaku in a phone interview with the Observer. Mr. Kaku serves as a Professor of Physics at City College of New York (CUNY) where he holds the Henry Semat Chair and Professorship in theoretical physics. He has authored several best-selling books, and co-founded the String Field Theory.

“You may say to yourself, well what’s the big deal? Well, every time a new wave was opened up for scientists, it changed our understanding of who we are. They’ve had religious, philosophical, and emotional consequences.”

The first wave of discovery was Galileo’s work with light waves, which demonstrated the Earth revolved around the sun. Galileo’s findings shook the Catholic Church and its emphasis on Geocentrism to its core. The second wave, Mr. Kaku explained, took place during World War II, when radio waves were discovered as useful for providing insight into galaxies—leading to the discovery of objects in space such as quasars, now known as black holes.

“The third wave is now,” Mr. Kaku added. “The third wave could be gravity wave detectors. In the first wave we discovered planets and stars, the second wave we discovered galaxies, what are we going to discover in the third wave? Not only will we discover colliding galaxies, but we will also get into the creation of the universe. We think that one of the largest sources of gravity waves is genesis itself. Now we have baby pictures of the big bang, taken about 200,000 years after the instance of creation.”

With the detection of gravitational waves, we could potentially determine exactly what happened the moment our universe was created.

“This is still speculation, but if we have space-based gravity detectors orbiting the Earth or sun, and we detect radiation from the incident of the big bang, we could run the video tape backwards and therefore get insight into what happened before the big bang. That is, what triggered the creation of the universe,” Mr. Kaku continued. “Of course we don’t know, but some people believe perhaps there was an umbilical cord that connected our baby universe to a mother universe. There are many theories being proposed, but they are not testable. Once we have space-based gravity wave detectors, we should be at the brink of being able to test for the impossible, that is, the world before the big bang.”

As scientists discover more about gravitational waves, some of the proposed theories in mainstream science fiction movies may begin to emerge as reality.

“A lot of the things you see in science fiction revolve around black holes, because black holes are strong enough to rip the fabric of space and time. If space is a fabric, then of course fabrics can have ripples, which we have now seen directly. But fabrics can also rip. Then the question is what happens when the fabric of space and time is ripped by a black hole? We have no way of empirically answering that question, because we know very little about black holes—but now we have a telescope. A telescope that can look at the very instant which two black holes collided and this could open up a whole new chapter because we don’t know what happens when you fall into a black hole, it’s a controversy.”

There are several theories to this controversy—including the notion that, when you fall into a black hole, you disappear—and that’s the end of the story. Another theory is that, when you fall in, information oozes out. Others believe you pass right through, like what happened in the film Interstellar.

“If you saw the movie, Interstellar, starring Matthew Mcconaughey, they actually use computers to simulate what happens if you fall into a black hole. If you just look at the math, not the physics and disregard radiation, quantum effects and stuff like that, there is another universe at the center of a black hole. The black hole is a ring—it rotates very rapidly—and if you fall into the ring it’s like going to the looking glass of Alice, so some people think the universe is like that. I work on something called String theory, and in string theory we start with membranes which can collide like beach balls or soap bubbles, and when these bubbles collide that’s the big bang, or when they peel off and bud into two bubbles, that’s the big bang. Of course this is speculation, but we hope to launch the first space-based gravity wave detectors in 2034. The European Space agency has recommended launching of their first space-based gravity detectors, so I think there’s going to be many nations setting up gravity wave detectors in space. Our gravity wave detector now is 2.5 miles long. These space-based detectors could be millions of miles across, because there is no need for shielding, no need for a tube or a vacuum chamber, space is empty up there. You could have three laser beams connecting 3 satellites in a triangle and that could be the basis of a new generation of space based gravity detectors. So a new chapter in Astronomy, as well as Theology, could be opening up.” 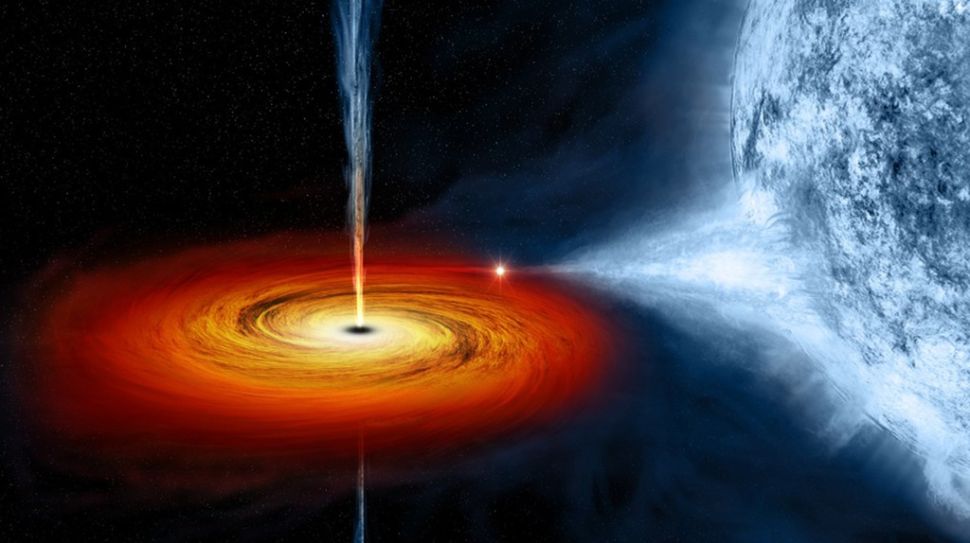