LAWRENCEVILLE — New Jersey Democrats have been riding high since last year’s Assembly elections, where they secured four seats and an historic 52-28 majority. Mike Muller, the driving force behind the Democrats’ consistently strong performance since he became director of the New Jersey Democratic Assembly Campaign Committee in 2002, said Thursday that he takes pride in holding on to a strong Democratic majority in the Assembly throughout both of Governor Chris Christie’s terms.

“I think other places may have chosen to save some of those resources for the next cycle,” he said of the Assembly Democratic campaigns’ 2015 windfall.

During a panel discussion with members of the DACC at Rider University’s Rebovich Institute for New Jersey Politics, the recently busted-down Republican governor featured prominently in the members’ rejoinders to the rest of his delegation. Strategists Tom Bonier, Jennifer Taylor and Mickey Quinn to talk about the Democrats’ ability to keep their majority healthy at such a constant clip since the end of the Whitman administration.

“Chris Christie is an immensely talented politician,” Muller said. “And when Republicans argue that the map is gerrymandered, I just kind of laugh about it. He won thirty of forty legislative districts,” he added of Christie’s 2013 reelection victory.

Republicans have levied the gerrymandering charge at the DACC and the rest of the caucus ever since Muller and the rest of a Democratic redistricting team secured a more favorable map in 2011. That outcome was the result of a Democratic tie-breaker’s vote after a stalemate between five Republicans and five Democrats. 2015’s surprise win for the Democrats in district eleven was the result of Muller’s careful electoral surgery, along with a few well-timed attack ads from the Democratically-aligned General Majority PAC.

“Chris Brown had a 24-point lead, and ultimately he was fighting for his political life in that race,” Muller said of the second district’s Republican incumbent, who kept his seat against a bevy of attack ads from General Majority.

“And he barely hung on to his seat against a really talented Democrat that’s not going away, and Colin Bell,” Muller continued.

As for the role that PAC money played as independent spending rose to a record high last year, Bonier pointed to Carly Fiorina’s lavish but ultimately doomed presidential bid.

“Money means nothing if you don’t know how to use it,” he said.

Asked by moderator Ben Dworkin what the team’s biggest disappointment has been during their careers in New Jersey, Muller said that former twelfth district Assemblyman Mike Panter’s loss to Caroline Casagrande in 2007 remained a bitter pill to swallow. After being redistricted to the eleventh in 2011, Casagrande lost that  seat last year.

“It was a gut-punch when we lost that seat,” Muller said. “And eight years later, to beat the same woman who beat him, Caroline Casagrande, is very rewarding and I think all of us take a special pride in it.” 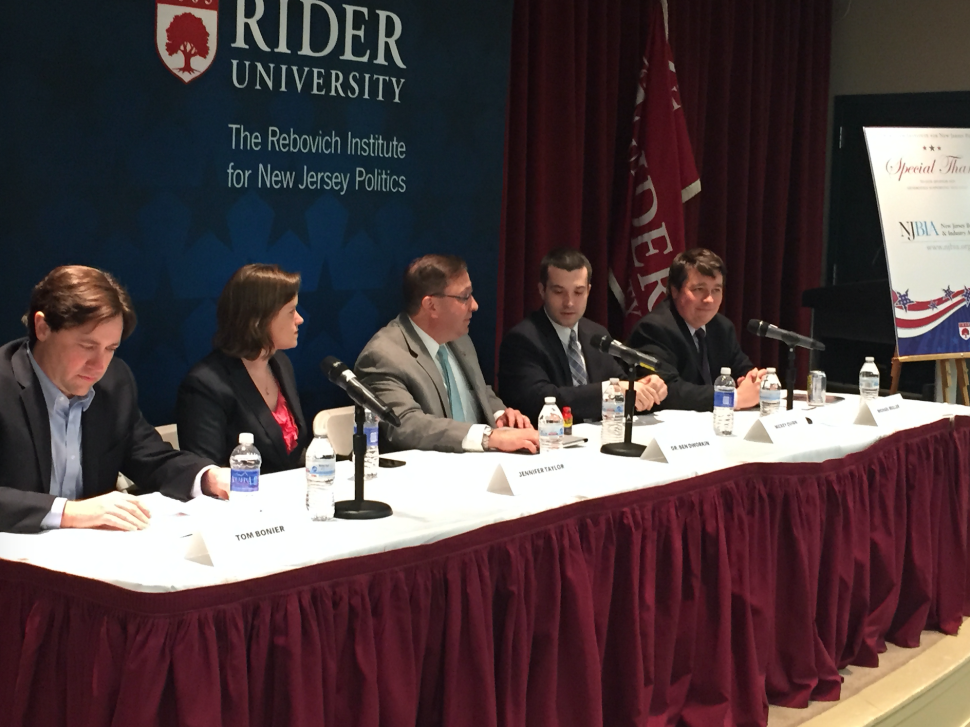