Relations between Russia and Turkey have been dismal since late November, when a Turkish fighter jet shot down a Russian bomber on the border with Syria, killing its pilot. That began a war of words between Moscow and Ankara that ought to concern everyone, since the former has several thousand nuclear weapons and the latter is a member of NATO.

Kremlin propaganda against Ankara has increased of late, setting the stage for further confrontation. As I explained here last week, Russian media outlets initially blamed the Sinai crash of Metrojet 9268 last autumn on the Islamic State, an atrocity which killed 224 innocents, nearly all of them Russians—a quite plausible claim. However, the Kremlin has abruptly shifted course and now blames the mass murder on Turkish ultranationalist terrorists without any evidence provided to support that explosive assertion.

Where things may be going between Russia and Turkey, ancient enemies who have warred many times over the centuries, was evidenced this week when the Kremlin announced large-scale surprise military exercises in the regions of the country that are close to Turkey. Troops were moved to full combat readiness, the last stage before a shooting war, with Sergei Shoygu, the Russian defense minister, announcing on TV, “We began our surprise check of the military preparedness in the Southwest strategic direction.”

That would be the direction of Turkey. These snap exercises involve the Southern Military District and the navy’s Black Sea Fleet, which are deeply involved in Russia’s not-so-secret secret war in eastern Ukraine. However, they also involve the navy’s Caspian Sea flotilla, which is nowhere near Ukraine.

It’s difficult to see how Turkey could stand idly by as an ancient city of 2 million is crushed just 50 miles from its frontier.

This implies that the snap exercises, which have been prominently featured in Kremlin media, are about Turkey, not Russia. This goes back to recent events on the ground in Syria, where the Kremlin-backed regime of Bashar al-Assad is slowly crushing its opponents, thanks to prodigious military help from both Russia and Iran. Regime forces are closing in on Aleppo, Syria’s biggest city, and 50,000 civilians have already fled the city in panic.

The Russian military displays scant regard for civilian casualties. Mr. Putin’s air force killed almost 700 Syrian civilians last month (to compare, the Islamic State killed less than 100 Syrian civilians in January), and if the crushing of the Chechen capital of Grozny in 1994-95, when Russian forces killed roughly 35,000 Chechens, mostly civilians, in just six weeks, is any guide, residents of Aleppo are wise to get as far away as they can.

Needless to add, such a bloody siege of Aleppo would set off a humanitarian crisis that the world could not fail to notice. It’s difficult to see how Turkey could stand idly by as an ancient city of 2 million is crushed just 50 miles from its frontier.

That is precisely the scenario that has seasoned analysts worried. In Pentagon circles, among those who are watching the budding war between Moscow and Ankara, citations of this famous movie clip are now commonplace. Distressingly, smart Russian analysts are thinking along similar lines.

Today Pavel Felgenhauer published his analysis under the alarming title, “Russia has begun preparations for a major war,” and he marshals a convincing case that the snap exercises in the country’s southwest are really a cover for a shooting war with Turkey—and therefore with NATO too, if Ankara is perceived as defending itself and can assert its right to Article 5, collective self-defense, which obligates all members of the Atlantic Alliance to come to Turkey’s aid.

‘It’s clear that there has to be some actual ‘redline’ for Mr. Obama, something that the United States cannot tolerate Russia doing—but where is it? If I don’t know, I’m sure the Kremlin doesn’t either.’

As The New York Times dryly noted of the Kremlin, “The [Defense] Ministry has ordered surprise maneuvers over the last three years as tensions between the East and West have worsened. The maneuvers have at times come as combat escalated in Ukraine and Syria.” In fact, using large-scale military exercises as a cover for aggression is old hat in Moscow. It was used during the August 1968 Soviet invasion of Czechoslovakia, which explains why NATO always got jumpy when Moscow held military exercises anywhere NATO territory, while snap exercises like this week inevitably caused Cold War panic.

Mr. Felgenhauer paints an alarmingly plausible scenario. As rebel forces defend Aleppo in Stalingrad fashion, the Syrian military, with Russian help, commences a protracted siege of the city, employing massive firepower, which becomes a humanitarian nightmare of a kind not seen in decades, a tragedy that would dwarf the 1992-95 siege of Sarajevo. However, any Turkish move to lift that siege, even with international imprimatur, would quickly devolve into all-out war.

Mr. Felgenhauer minces no words about this: “Russia has begun the deployment of forces and resources for a major war with Turkey.” Mr. Putin has decided to let his client, the Assad regime, win its bloody civil war, first in the north around Aleppo, and any moves by Turkey or NATO to stop them will be met with force. So far, President Barack Obama has let Mr. Putin do whatever he likes in Syria, no matter the cost in innocent lives, so the Kremlin has no reason to think that will change.

The Yom Kippur War of October 1973, when the United States and the Soviet Union came alarmingly close to great power war, is cited as an ominous precedent by Mr. Felgenhauer—albeit one that ended happily when nuclear war was averted thanks to wise diplomacy. There is no reason to think the befuddled Obama administration is that diplomatically deft.

But who is Pavel Felgenhauer? Regrettably, he is not a guy in furry slippers in someone’s basement spouting weird conspiracy theories. Instead, he is one of Russia’s top defense analysts with solid connections in that country’s military. He is a frequent critic of the Russian military and the Putin regime; it’s noteworthy that he published his analysis in Novoe Vremya (New Times), a Ukrainian newsmagazine, not a Russian outlet, perhaps because this sort of truth-telling is unwelcome at home. His prognostications are often correct (for instance his prediction of the Russian invasion of Georgia in August 2008, which he called two months before it happened).

That is NATO’s top concern right now: After years of weakness and vacillation, the Obama administration may find itself backed into a corner by aggressive Russian action.

Is Mr. Felgenhauer’s alarmism warranted? Many Western insiders think along similar lines. By letting Mr. Putin get away with whatever he likes in Syria, Mr. Obama has created a deeply dangerous situation in the region. By abandoning his infamous Syria “redline” in September 2013, the White House in effect outsourced American policy there to Mr. Putin, as I warned at the time, and which the Obama administration, powerless to influence terrible events in Syria, is slowly realizing.

“Are we heading for our ‘Sarajevo moment’?” a senior NATO official bluntly asked. “It’s clear that there has to be some actual ‘redline’ for Mr. Obama, something that the United States cannot tolerate Russia doing—but where is it? If I don’t know, I’m sure the Kremlin doesn’t either.”

That is NATO’s top concern right now: After years of weakness and vacillation, the Obama administration may find itself backed into a corner by aggressive Russian action. Particularly if coupled with intemperate Turkish reactions, that could create a nightmare of historic proportions around Aleppo. Although the White House has foresworn any military intervention in Syria’s fratricide, it’s worth noting that Mr. Obama led NATO to war in Libya exactly five years ago to prevent possible slaughter in Benghazi, a far smaller humanitarian threat than the terrifying sword of Russian artillery and airpower that’s hanging over Aleppo right now.

For their part, the Russians are upping the ante with regime media publishing claims by the Defense Ministry that air attacks on Aleppo yesterday that killed civilians, including the bombing of a hospital, were actually perpetrated by U.S. Air Force A-10s, a war crime that they say the Pentagon has tried to pin on Moscow. In fact, American intelligence knows this was the work of the Russian Air Force: “We have intercepts of the Russian pilots talking during the attack,” a Pentagon official explained. “As usual, the Russians are lying.” Yet this sort of dishonest Kremlin propaganda, what spies term disinformation, is exactly what the Obama administration has refused to counter, as I’ve explained in this column, in a futile effort to keep the Kremlin happy.

Mr. Putin instead has taken his measure of Mr. Obama and has doubled down, saving his client regime in Syria. Russia has won in Syria, and NATO and the West are stuck with that outcome, as are the unlucky residents of Aleppo. “I hope Obama doesn’t decide to get a backbone now,” said a retired American general, who knows the Russians well, “since the Kremlin is in ‘drive’ in Syria and isn’t about to do ‘reverse.’”

There seems to be little chance of this White House taking on the Russians in Syria. However, there are no guarantees that Ankara is equally inclined to let the Kremlin do whatever it wants on its southern border, and that is how NATO could get embroiled in World War III over the Levant. Cooler heads may prevail, and all sensible people should hope they do here. 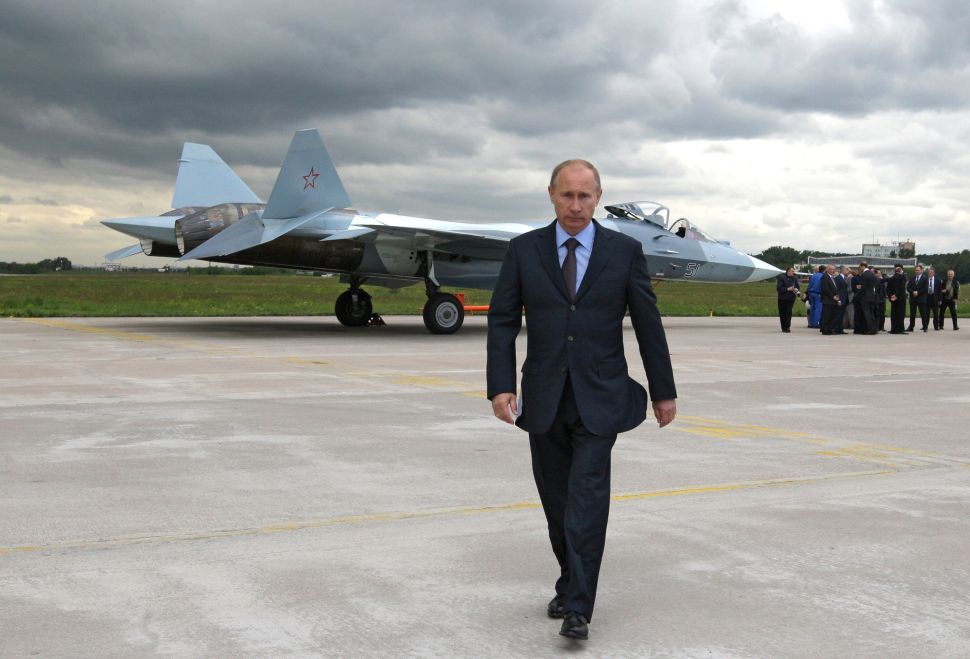