Continuing on our journey through @LibertyScienceCenter, we explored the Infinity Climber—a jungle gym that hangs 35 feet above the floor, designed by noted artist and architect Spencer E. Luckey "for children to experience the joy of climbing." The structure was conceived as an expression of relativism, providing the climber with endless routes and infinite views—it reminded us of the Guggenheim's spiral rotunda, which invites visitors to visualize the art from different angles and perspectives. Photo: Kris McKay (@kgprojects). #MuseumInstaSwap

If you flip through the Jewish Museum’s Instagram account today, you might be surprised to see artworks from the Studio Museum in Harlem. Likewise, over on the American Museum of Natural History’s page, paintings and sculptures from MoMA are taking center stage.

In a citywide exchange taking place for one day only, 18 museums from New York, plus Liberty Science Center in New Jersey, are featuring the art and artifacts from the collections of their peers, according to Wired.

Some swap pairings include the Intrepid Sea, Air and Space Museum and the Cooper Hewitt, Smithsonian Design Museum, as well as the Queens Museum and the Metropolitan Museum of Art.

The social media partnership is inspired by a similar project spearheaded by London museums in 2015, which featured ten of the city’s leading institutions, including the British Museum and the Victoria and Albert Museum. In New York, museum staff were encouraged to visit their partner institution’s collections prior to the swap.

Not only does this iron look really unique, but it also has a tie to USS Intrepid! Manufactured by Saunders Machine & Tool Corp. and Corning Glass Works, this remodeled electric iron is dated 1946, part of the postwar design era. It is mostly made out of molded and emulsion-painted pyrex glass, as metal was in short supply during and after the war. For example, USS Intrepid, which was commissioned in 1943, was made from more than 40,000 tons of steel! This is part of the Product Design and Decorative Arts department at @cooperhewitt, and it is featured in the Making Design exhibition on display now! #MuseumInstaSwap #nyc #designmeetshistory #museum #history #USSIntrepid #aircraftcarrier #WorldWarII

“The swap was an opportunity to reexamine our collection through the lens of another institution that also explores identity,” said JiaJia Fei, the Jewish Museum’s director of digital, to the Observer by email. “We thought we were perfectly paired as museums that explored art and artists of Jewish or African descent, but made accessible for people of all backgrounds.”

Some highlights from today’s swaps can be found at the top of the Intrepid’s page, which features an electric glass iron made in 1946. The caption beneath the image explains that its unique construction from glass rather than metal was due to supply rationing for the war effort, when steel was diverted to make weapons and machinery—like the WWII aircraft carrier U.S.S. Intrepid, for instance—for U.S. troops rather than common household items.

Installed in the @museumofcityny lobby, “Starlight (Hanging Grid II)” is a dazzling light installation, designed by Cooper Joseph Studio. Shaped in dialogue with the design of the building's historic stairway, the piece is a poignant reminder of how architecture can reflect and further the mission of a Museum–in this case to connect the city’s past and present. Similarly, the New Museum’s building was designed in response to the history and powerful personalities of both the institution and its storied site on the Bowery. #MuseumInstaSwap

Meanwhile, the New Museum is spotlighting a light installation by Cooper Joseph Studio in the lobby of the Museum of the City of New York. Starlight (Hanging Grid II) was created in response to the sweeping staircase inside the Georgian Colonial-Revival mansion on 5th Avenue that the museum calls home. What’s the installation’s connection to the New Museum? Staffers point out the the New Museum’s contemporary building on the Bowery was similarly designed with its Lower East Side surroundings in mind.

Below, some additional highlights from #MuseumInstaSwap.

We're kicking off today's #MuseumInstaSwap with this mask from New Guinea. African and Oceanic masks like the ones on view at @AMNH have inspired many modern and contemporary artists. In 1907, Pablo Picasso visited the Musée d’Ethnographie du Trocadéro in Paris at the urging of fellow artist André Derain. His powerful encounter with the African and Oceanic sculptures on display catalyzed a new way of seeing for him, as evidenced in his groundbreaking painting "Les Demoiselles d’Avignon," completed that summer, and the unfinished standing "Figure," carved from an old oak beam, both on view now at MoMA. Follow @AMNH today to see their photos of MoMA! [Mask from New Guinea in the Margaret Mead Hall of Pacific Peoples. Late 19th Century]

A photo posted by MoMA The Museum of Modern Art (@themuseumofmodernart) on Feb 2, 2016 at 7:14am PST

Installed in the @studiomuseum lobby, you can’t miss #GlennLigon’s blinking neon installation “Give Us a Poem.” After a speech by Muhammed Ali at Harvard University in 1975, a student asked Ali to give the audience a poem. Ali replied “me, we.” As a museum for people of all backgrounds, we are drawn to this work as a poignant statement about identity and community that extends beyond our own. #MuseumInstaSwap

Among the 12,000 objects in @intrepidmuseum’s collection are items donated by veterans, including uniforms. Some officers decorated their uniforms with colorful embroidery on the inside lining, as seen here. The officer could reveal his secret (and unauthorized) personalized design by reversing his uniform while on “liberty” or shore leave away from the ship. This reminded us of our upcoming guest-curated exhibition “Thom Browne Selects,” in which the fashion designer explores the theme of uniformity and individuality through an immersive installation of historic and contemporary mirrors, frames, and personal effects. #MuseumInstaSwap 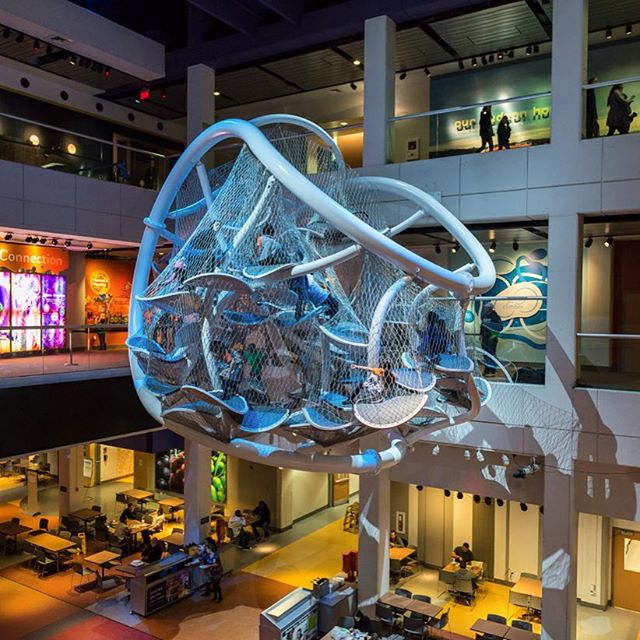