For a television politics junkie, watching Republican presidential debates is like witnessing brawls in saloons, every man for himself, with sucker-punches swinging and chairs flying and glass breaking and the mud and the blood and the beer, as Johnny Cash once put it.

Watching Democratic presidential debates between Hillary Clinton and Bernie Sanders is different. It’s like seeing two well-bred tennis players who like and respect each other but nevertheless want to destroy their rival in this competition. Or, as Anderson Cooper put it on CNN, “It was a civil knife fight.”

The Republicans go at it again Saturday with Donald Trump, Ted Cruz, John Kasich, Marco Rubio, Jeb Bush and—please-oh-please, Republican National Committee, do not inflict upon us again Dr. Ben Carson, not if you can help it. His candidacy has passed its expiration date.

Compared to GOP groin-kicking and eye-gouging, Thursday’s Democratic debate between Ms. Clinton and Mr. Sanders took the high road with both agreeing on basically everything and differing only in tactics and level.

Who’s the more progressive liberal? Who’s the most practical liberal?

Mr. Sanders hinted vaguely he is the first Jewish-American in history to get this far by winning the New Hampshire primary. Except it wasn’t explicit and the message was mixed.

During the two-hour exchange—gently guided by moderators Gwen Ifill and Judy Woodruff of the Public Broadcasting System—the conversation took an unexpected turn toward historical perspective when Mr. Sanders brought up Dr. Henry Kissinger, the former Secretary of State under President Richard Nixon.

“I’m proud to say Henry Kissinger is not my friend,” Mr. Sanders said.

Ms. Clinton volleyed back that you have to listen to many people to understand a complex world and that Mr. Kissinger’s good deeds involved an opening to China. Mr. Sanders shot back that trade deals with China now hurt Americans because they take away middle class jobs in manufacturing.

Perhaps it was, but it wasn’t as weird as exchanges of personal insults or a rant against abortion or a vow to build a wall along the Mexican border or a promise to purify the nation by driving out foreigners while keeping out those who do not practice “Judeo-Christian” values. That’ll come Saturday.

Speaking of religion: Another good moment came when Mr. Sanders hinted vaguely that he is the first Jewish-American candidate in history to get this far by winning the New Hampshire primary. Except it wasn’t that explicit and the message was mixed.

IFILL: “Senator, do you worry at all that you will be the instrument of thwarting history as Senator Clinton keeps claiming that she might be the first woman President?”

This spurred the post-debate chatter on MSNBC.

Jonathan Capehart, a young African-American with an earnest manner, said there is “a meme emerging in the Jewish community” about Sanders’ reluctance to identify himself as Jewish.

Host Chris Matthews, an older and savvier political hand, said such things are very sensitive and safely discussed best within members of the group, sort of like John F. Kennedy’s Catholicism, one of Mr. Matthews’ favorite subjects.

But perhaps Mr. Sanders also was referring to his stature as an Independent-Socialist-Democrat. As a proud leftist, he’s cut the highest profile for that philosophy since Eugene Victor Debs. (Google him, too, kids).

Over on Fox, the conversation drifted to Charles Krauthammer, who seemed to get a kick from references to Dr. Kissinger and Pol Pot by Mr. Sanders.

“That was a real classic rock riff,” Mr. Krauthammer said.

He also said Ms. Clinton was smart to make strong appeals to Latin-American voters in Nevada and to black voters in South Carolina and to women everywhere.

The next two Democratic contests are in Nevada on February 20 and in South Carolina on February 27 and she needs to chip into the female support for Mr. Sanders.

Mr. Krauthammer joked about how Mr. Sanders referred to Franklin Roosevelt’s Great Depression pep talk of having nothing to fear but fear itself.

He said he half-expected Mr. Sanders to say “I wrote that speech!”

“But I’m a Republican, ” Mr. Krauthammer concluded, “so what do I know?” 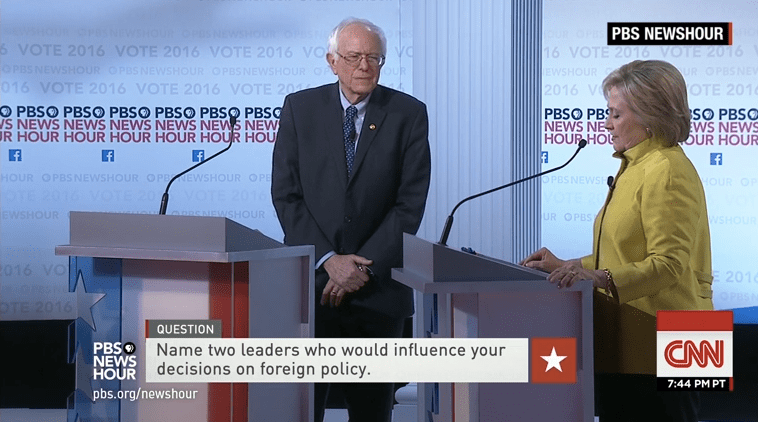