The Philadelphia Museum of Art is defiantly sharing a painting by pop artist Evelyne Axell on its Facebook page in response to censorship by the social media site’s powers that be.

A representative from the museum told the Observer that when the museum used an image of Axell’s 1964 painting Ice Cream on Facebook in an ad campaign for the forthcoming exhibition “International Pop” it was removed shortly after by the company.

In a statement to the museum, Facebook explained the painting was taken down for “containing excessive amounts of skin or suggestive content.”

On Friday, the museum uploaded the colorful image above—which features a woman suggestively licking an ice cream cone—to its Facebook page with the following message:

“Ice Cream” (1964) was painted by Evelyne Axell, one of the first female Pop artists. Her work can be understood as a critique of mainstream Pop Art, in which women were often depicted as passive, decorative objects. In contrast, Axell sought to depict active, confident women who pursue satisfaction on their own terms—such as the protagonist of “Ice Cream,” who unabashedly enjoys her dessert. Axell’s provocative paintings challenge artistic conventions while also exhibiting a liberated, playful spirit characteristic of the sexual revolution of the 1960s. http://ow.ly/XXNYw

What are your thoughts about Facebook’s decision to remove this image?

“It’s a metaphor for sexuality, and yet that seems to be even more uncomfortable than a literal image of a naked body,” exhibition curator Erica Battle told the Observer.

Ms. Battle said that the decision to use Axell’s painting for the show’s marketing was because it “embodies so many themes of pop explored in the show.” Those themes include (but are not limited to) consumption, and the subversiveness and politics of pleasure.

“The artist was very aware of how her images might come across,” she said. On the woman pictured in the painting, she explained, “She’s doing something as common and everyday as enjoying a dessert, but [Axell] makes the mind go elsewhere—she’s in control of that reaction.”

“[The work] can still be provocative in a productive way. It’s such a great vehicle to have a discussion about what the politics of looking are,” said Ms. Battle. 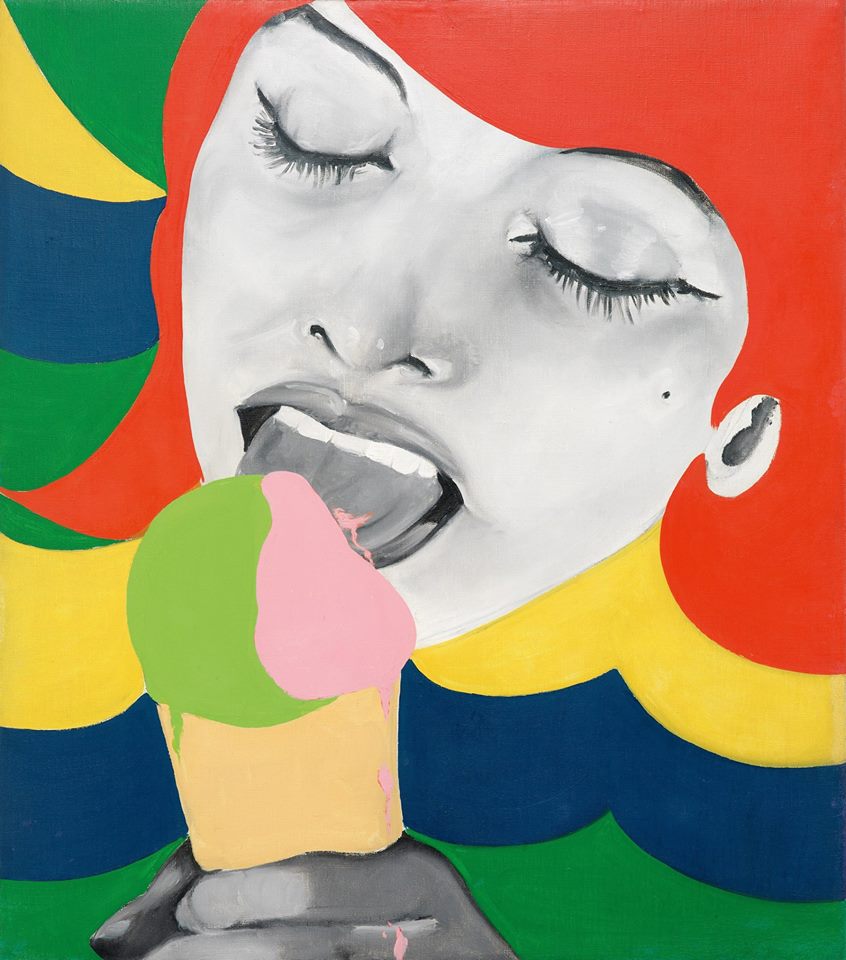