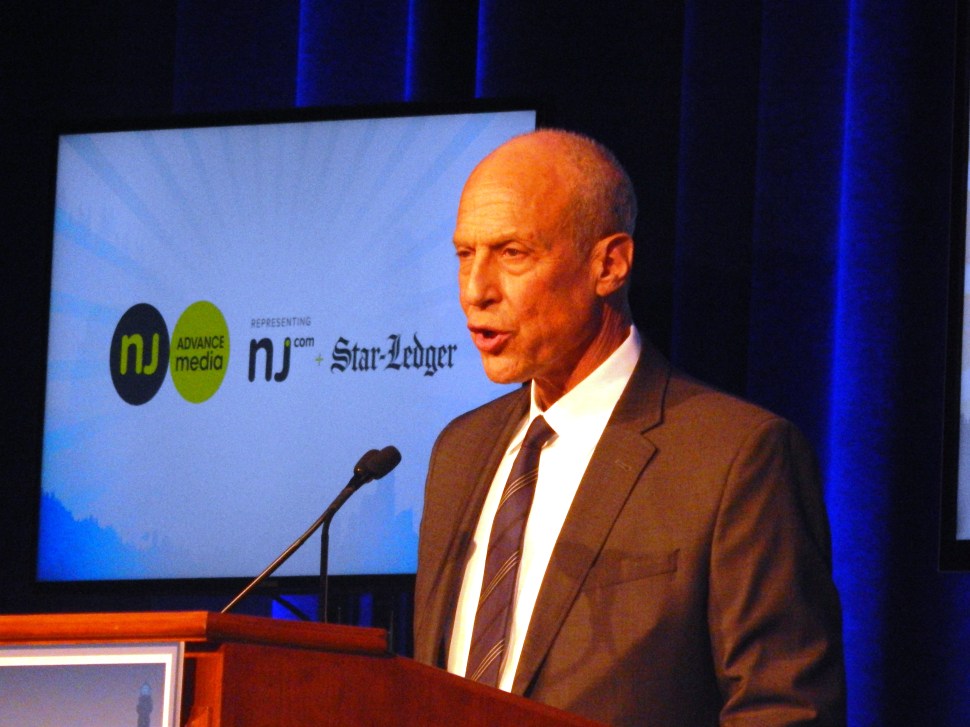 “If you’re a reporter, New Jersey never lets you down.”

Good morning, it’s Friday, but don’t speak too loudly, as politicians across the state are recovering from their train trip to Washington yesterday. Talk was of the next gubernatorial contest and political developments in county and party politics. Meanwhile, state residents show that they appreciate Gov. Chris Christie’s return from the campaign trail.

Quote of the Day: “His record low approvals in December have mostly inched up. It is too soon to tell, but his resumed presence in the state may be renewing a bit of faith – or at least halting his ratings slide,” – Ashley Koning, assistant director of the Eagleton Center for Public Interest Polling at Rutgers University, on the benefit to Gov. Chris Christie of suspending his presidential campaign and returning to New Jersey.

Heard on the Train: ‘Who Would Run?’ Becomes the Line of 2016
Shell shock.
That describes the condition of anonymity mindset of those Republicans trying to grapple with the reality of having to run with on-the-ground conditions in the NJ GOP right now, including the volatility of the presidential contest and several unsettled universes in key counties.
Max Pizarro, PolitickerNJ Read more

Rutgers Poll: 36% Say Christie’s Return to NJ Will Have Positive Impact
New Jersey voters are split on what Gov. Chris Christie’s return means for the Garden State, according to the latest Rutgers-Eagleton Poll. Following his budget address on Feb. 16, a 36 percent plurality of voters says Christie’s new focus on governing New Jersey will have a positive impact on the state. But 27 percent say his presence will have a negative influence, while another 33 percent think he will have no impact at all. Four percent are unsure.
Politicker Staff, PolitickerNJ Read more

Overheard, Part 1: The Next Chairman of the Mercer County Dems
A drunk at the bar raised his head just long to see, feel and hear the stampede of New Jersey Democrats into his hitherto quiet space.
In seconds, the Dubliner in downtown D.C. turned into the happening place for Democrats and their business allies, some of them Republicans, in an event sponsored by the Democratic State Committee.
Max Pizarro, PolitickerNJ Read more

Sweeney on Labor and Minimum Wage Effort: We Don’t Want Duplication
Senate President Steve Sweeney (D-3) awaited the invasion of the Marriott by New Jersey Democrats, standing like a mammoth, unmoved bullfighter amid the whirling Pamplona-like surge of his fellow Garden Staters, who poured in off the chamber train, up the Metro escalators, and took the bar here hostage.
Max Pizarro, PolitickerNJ Read more

Booker on Fire for Clinton in South Carolina
The Cory Booker for VP buzz circulated down the length of bar top here this evening at the Marriott.
Max Pizarro, PolitickerNJ Read more

Menendez: Republicans All Talk on National Security
Senator Bob Menendez kicked off the Democratic side of the New Jersey Chamber of Commerce’s Walk to Washington by echoing the Clinton and Sanders campaigns’ messages of confronting income inequality while throwing a characteristic jab at his Republican colleagues on the Senate Foreign Relations Committee.
JT Aregood, PolitickerNJ Read more

WATCH: Auth Opposed to Minimum Wage Proposal as Constituted
Against the backdrop of a state debate on a proposed $15 minimum wage, Assemblyman Robert Auth (R-39) said he expects to oppose the bill unless it contains highly specified measures that would eliminate the punishing impact on mom and pop stores.
Max Pizarro, PolitickerNJ Read more

Birdsall Executive Pleads Guilty to Defying Pay-to-Play Law
Thomas Rospos, a former executive for Birdsall Services Group (BCG) plead guilty on Thursday to his role in a scheme that made over $1 million in political contributions through employees in order for the firm to evade New Jersey’s pay-to-play law.
Alyana Alfaro, PolitickerNJ Read more

The Washington Survival Kit
The boxes pictured above are sitting on every seat on the train, one of the trinkets circulating on this year’s Walk to Washington.
Max Pizarro, PolitickerNJ Read more

Sumter Not Ruling Out a Guv Bid
Assemblywoman Shavonda Sumter, who often trails behind the regular shortlist of possible contenders in discussion of 2017, says she is still weighing a bid of her own.
JT Aregood, PolitickerNJ Read more

WATCH: Golden Examines the Prospect of Running with Trump
Monmouth County Sheriff Shaun Golden is running for reelection this year and looking at the prospect of running on the Republican line with billionaire real estate tycoon Donald Trump, the front-running 2016 GOP candidate for president.
Max Pizarro, PolitickerNJ Read more

State Officials ‘Walk’ To Washington
Political honchos and business bigwigs from across the state have boarded an Amtrak train bound for Washington, D.C., as the state Chamber of Commerce commences its 79th annual “Walk to Washington.”
Associated Press Read more

Paterson councilman offers plan for cutting budget, but mayor calls it impractical
With the city in a budget crisis that threatens to shut down non-essential services, Councilman Alex Mendez said he is crafting a sweeping package of spending cuts that he asserted would save millions of dollars.
Joe Malinconico, The Record Read more

A somber Christie’s advice is ironic, tells youngsters hard work pays off
Governor Christie delivered a homily on the virtue of hard work to a beaming crowd of Newark elementary school kids Wednesday – without the usual crescendo-building fervor of his town hall events.
Charles Stile, The Record Read more

Why such hatred of Obama? The GOP needs therapy
The animus towards President Obama in Congress has become so irrational that I can only conclude Republicans need group therapy to work out their anger issues.
Tom Moran, Star-Ledger  Read more

Judge deals blow to Jersey City in reval case
A Hudson County judge today dealt a major blow to Jersey City in the breach-of-contract trial initiated by Realty Appraisal Co., with the judge dismissing a counterclaim filed by the city that had represented the crux of its defense.
Terrence T. McDonald, The Jersey Journal Read more 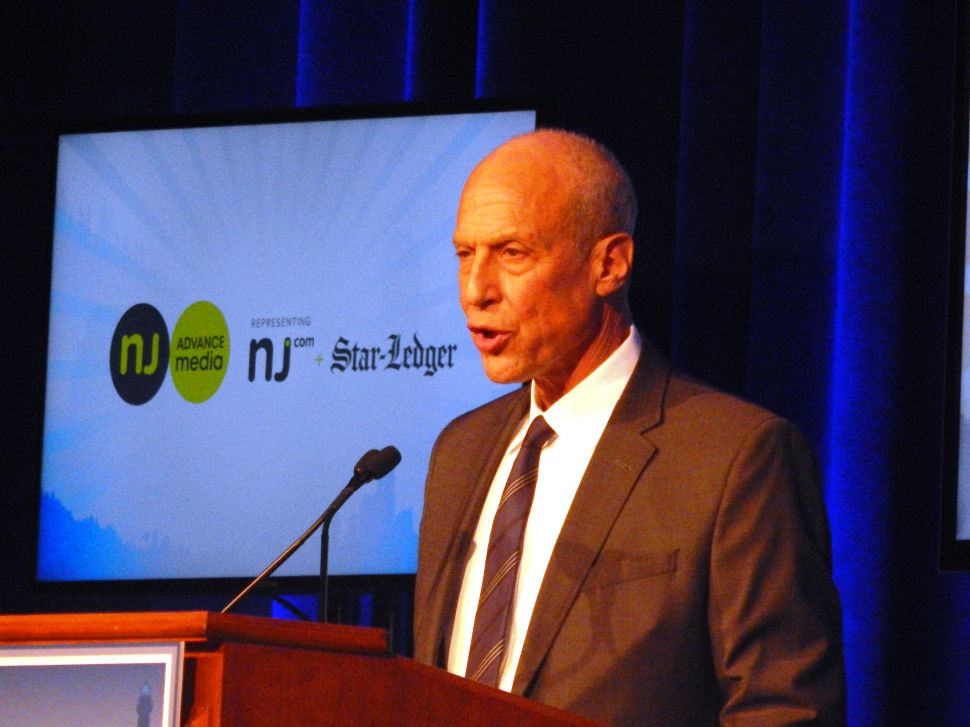