It’s Tuesday morning, where cracks are showing in the state GOP and Gov. Chris Christie is drawing attention from his Trump endorsement by putting up his state Supreme Court nominee, again.

Quote of the Day: “Because I don’t want to,” – Gov. Chris Christie, back in New Jersey after his time on the campaign trail, on why he wouldn’t answer press conference questions on topics relating to anything other than his state Supreme Court pick.

Christie Puts Forward Bauman for Supreme Court
Swatted mercilessly in the aftermath of his announced endorsement of Donald Trump for president, Gov. Chris Christie today tried to change the narrative trajectory with an “on topic only” press conference.
Max Pizarro, PolitickerNJ Read more

Fulop Issues Executive Order to Raise City Workers’ Pay to $15 an-hour
As Trenton lawmakers try to line up a way forward on a statewide minimum wage and stare at numerous hurdles in the way, including a veto-threatening Gov. Chris Christie, Jersey City Mayor Steven Fulop this morning announced that he readjusted to $15 the minimum wage paid to all of his city employees.
Max Pizarro, PolitickerNJ Read more

Christie Compares Superior Court Vacancy to Scalia Battle
Drawing comparisons between his own unsuccessful nomination of Judge David Bauman to the state Superior Court in 2014 and the ongoing conflict between House Republicans and President Barack Obama over the late supreme court justice Antonin Scalia’s seat, Governor Chris Christie said during his announcement of a second round of confirmation hearings for Bauman that his appointment would preserve “the tradition of partisan balance on the court.”
JT Aregood, PolitickerNJ Read more

Green Says U.S. Could be Set Back 100 Years if Trump, GOP Win White House
Republican presidential front-runner Donald Trump stumbled on Sunday when he was asked about an endorsement from KKK leader David Duke during a CNN appearance. He was pressed multiple times on whether he would disavow endorsements from Duke and other white supremacist groups. He did not immediately reject the support and, instead, claimed that he “didn’t know” what the interviewer was referring to or much about Duke and the group.
Alyana Alfaro, PolitickerNJ Read more

In Bloomfield, Probable Cause Found Against Lopez for Chalet Fight
According to a report by Essex News Daily, a judge recently found probable cause against Bloomfield Councilman Joseph Lopez on three criminal complaints made on him by Bloomfield resident Daniel Chalet following a January altercation after a city council meeting.
PolitickerNJ Staff, PolitickerNJ Read more

Senator Bob Smith: NJ Utilities ‘Dying’
At a committee hearing on his bill to make New Jersey’s supply of electricity come from 80 percent renewable sources by 2050, Senator Bob Smith (D-17) painted a bleak picture of the state’s current energy infrastructure. The legislation is intended to offset dependence on aging energy infrastructure and eliminate the need for new natural gas pipelines in the state. The committee voted 3-0 in favor of the bill.
JT Aregood, PolitickerNJ Read more

10 Ways to Correct Privatization’s Mistakes at Bergen Regional Medical Center
Over and over, privatization schemes in New Jersey have failed consumers, workers, and taxpayers alike, often raising costs and diminishing services for the public. It is particularly concerning when the costs can be in the lives of our most vulnerable, elderly and residents with mental illnesses. The lease of Bergen Pines, NJ’s largest hospital, to a private company nineteen years ago was a particularly egregious example of a lopsided contract that gave millions in profits to a private company with little accountability to the taxpayer.
Ann Twomey, PolitickerNJ Read more

State Police boosted academy diversity by ignoring background checks, suit says
A veteran state trooper alleges in a whistleblower lawsuit she was retaliated against by her superiors after raising objections that police academy background checks were compromised because of pressure to increase racial diversity among State Police ranks.
Anna Merriman and S.P. Sullivan, NJ.com Read more

WATCH: Christie shoots down questions about pal Trump at press conference
He wasn’t mean about it. The governor was just adamant: Stay on topic.
During his first press conference in New Jersey since dropping out of the presidential race, Gov. Chris Christie told reporters Monday he would only answer questions about his nominee to New Jersey’s Supreme Court.
The Auditor, NJ.com Read more

Lawyers for Sen. Menendez, government argue to appeals panel in corruption case
A top Justice Department prosecutor urged an appeals court Monday not to let Sen. Bob Menendez and other members of Congress become “super citizens” with immunity for his actions, but Menendez’s lawyer said the Constitution requires that many of the corruption charges against him be dismissed.
Herb Jackson, The Record Read more 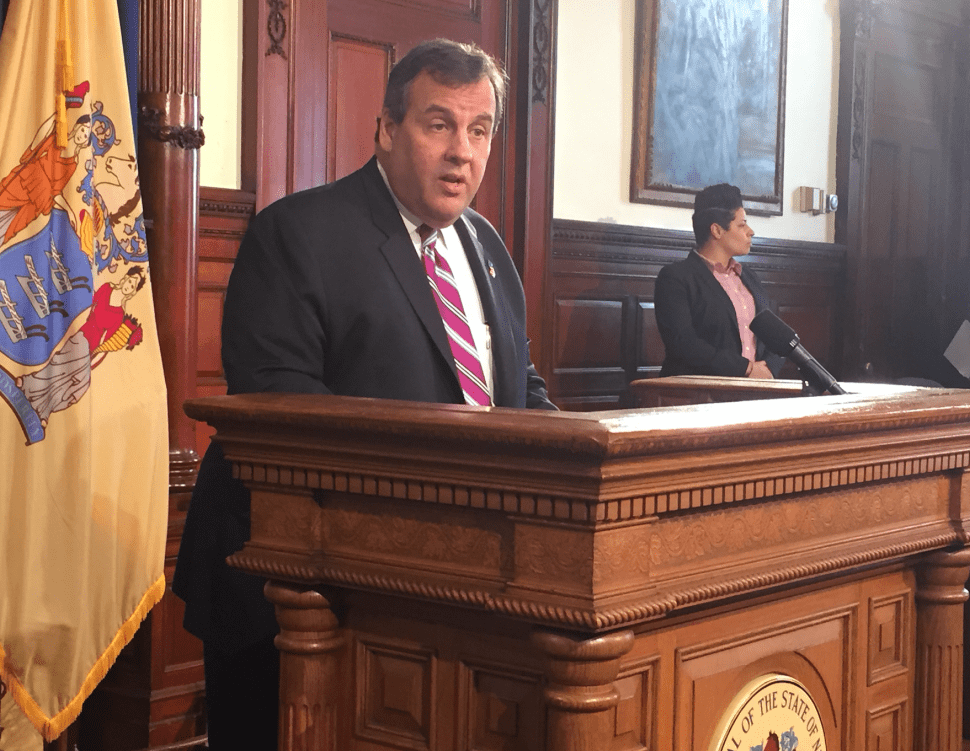