Well this was an uneventful week in Potomac, which can probably said about most weeks in Potomac. The title really pulls no punches about Katie’s status as a wannabe desperate housewife, and man do things get depressing on that front.

But first, we see Karen and Gizelle at an airfield because Karen has decided to take flying lessons. I think this is fun and Karen is growing on me. She alludes to a time when she thought her areola was going to pop out. Yeah, I like Karen now.

Karen anoints the plane she’s going to fly so it doesn’t crash. She brought holy in a bottle in her purse. As one does.

We peek into another depressing vignette from Katie’s life, where she struggles to wrangle her children at a park. For a second I think that she has a small adult child, but it turns out it’s her nanny, Mai. Oh well.

Ashley comes to help because she can’t wait to be a mom, so she ties her dog to a fence and sits next to Katie on the swings without speaking a word to any of the children. Ashley then remarks that unlike Katie’s kids, her children will like her. Ashley is a sketchy character, guys.

Furthering her sketchiness, she lets Katie know that she’s been Googling all the ladies to find out more about them. First rule of Googling people, you don’t talk about Googling people. She runs her mouth about how Robyn’s alleged financial problems. Ashley this is rude.

Cut to Charrisse, shooting hoops with her kids and then immediately sitting down for Kir Royales with no less than four different fruits and syrups to sip on the driveway with a friend we’re told not to care about. Come to find out, her marriage isn’t in great shape. I’m shocked. No, but this is a bummer and I really feel for Charrisse.

Gizelle and her children get lunch with her ex-husband Jamal. Her attitude about him is why Gizelle is the shining star of this show, and maybe the entire franchise right now. She still loves Jamal, but he cheated so she will never even consider giving him another chance.

We learn a little bit about his work as a pastor in Baltimore, standing up against the police during the Freddie Gray case. Could I love this family more? Gizelle knows what’s up in the world, in life, and in lipsticks. Except her kids don’t know who Prince is and that worries me.

This episode seemingly drags on as I start to pull up YouTube videos of Ben Vereen, but thank goodness for Karen’s testimonial fashion. She wears a pink gown with a V so deep I thought her decolletage was going to fall out, in the best possible way. Eveningwear for the testimonials is now my standard and anyone who wears anything less is a peasant.

Gizelle, Karen, and Katie go to some sort of pajama party at Charrisse’s house but Charrisse is the only one in pajamas. Ashley’s upcoming cat-themed birthday party is discussed, oh and also Katie comes out as bisexual!!!!!! I am psyched to have an LGBT Housewife! She talks about how she used to have fun with her sexuality during her days in New York, but now she has to settle down like she’s supposed to. Aww, Katie’s life just went from funny sad to actually really sad.

Katie talks Ashley’s Googling and Charrisse opens up about her marriage troubles. The ladies are all very supportive. Even Katie is trying as she stares at Charrisse and puts one stiff arm on her. How sweet.

Katie’s boyfriend who I more than suspect is a dirtbag comes home to some updates Katie has done to their house, including turning his workout room into a “Mrs. Room?” What I’ve gathered that to be is a room with aggressive amounts of couple photos on the wall, a chair, and a sign that says “The Mrs.” on the door. She’s not even engaged. This really hurts me. As does their microwave which isn’t even stainless steel.

Ashley’s party tepidly arrives, full of muscular men in jungle cat body paint. All the ladies are there, and Robyn is upset that Ashley has been Googling her and talking about it. Andrew and Katie are sucking face on the couch next to everyone. This relationship is dark days.

Ashley finally arrives, in leather leggings and a bustier with her 55 year-old husband wearing a fedora and carrying a whip. Yikes. She and Robyn work their drama out so quickly I almost missed it. What a nail-biting episode. Also she gets a Porsche that Katie practically climbs into.

This week was dull but MVP goes to Karen’s cleavage. More shots of them eating crab, please! 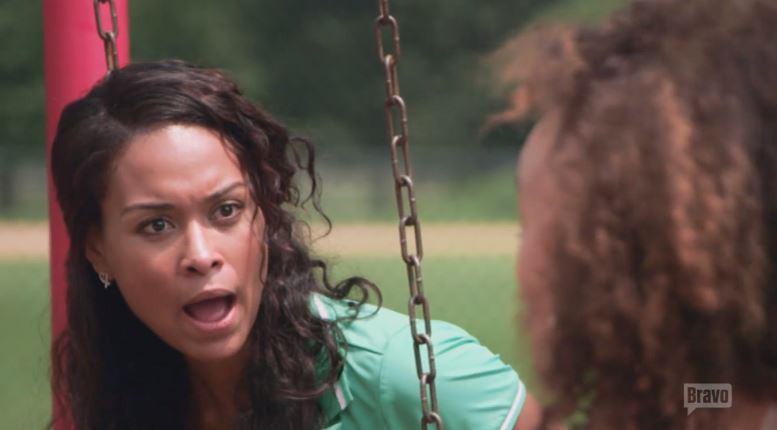