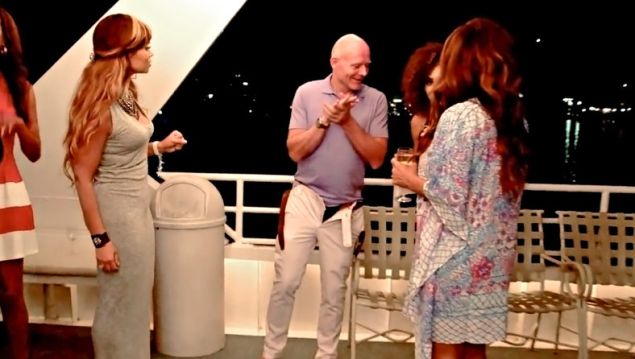 …and then Ashley’s husband took off his pants. Bravo

In Potomac, crimes that occur in front of an Orange Julius are considered especially heinous. These are their stories.

Ashley needs an assistant. She’s so busy! I am a year younger than Ashley and I think this means I also need an assistant. Just like Ashley, I have better things to do, like purchasing leopard corsets and gossiping at the playground. She hires some woman because they talked about didgeridoos? This is a good business choice to me because I put a didgeridoo player in my band in the “Demi Lovato’s Path to Fame” app and it’s worked out really well for my career so far.

Charrisse and Robyn hang out which is fun to see. I really would love some more character development from Robyn. I feel like she might be too normal for this franchise, what a shame. Robyn’s roommate and ex-lover Juan may need to move for a new job. It seems to me that they both need to kick their men to the curb. Long distance is the wrong distance! That’s a dealbreaker, ladies!

Finally we get some Gizelle. Gizelle gives blunt banged wigs a life I never thought they could have. A true innovator. She and Karen get together to discuss Ashley’s strange party and how it is mega tacky that there was a cash bar. I am with them on this. If janky frat formals can fit open bars into their budgets, so can you, Ashley. Gizelle didn’t pay her tab at all because why should she? Her presence is a present.

The good news is, Karen is having a yacht party. The only frat formal I ever attended was also held on a boat, guys. I’m just saying like these ladies are drawing a lot of comparisons to my experiences with a large group of sweaty, drunk boys in college. Let that speak on what this franchise is about. They also have the same kitchens as a frat house basically.

As the ladies prepare to be luxuriously whisked away to Annapolis (no, really), everyone is worried that Katie is going to behave like she’s at the dance at the end of camp where the girls’ camp and the boys’ camp finally get to interact again. Meaning, her tongue will be in the mouth of the first lame boy she can find the whole night.

Katie apologizes for her tacky behavior to Karen and immediately turns her attention to her charity thing that does some vague stuff in the community. Way to spin it, Katie. She brings up hosting a Casino Night again, which gets me a little excited because I want to see Gizelle in a Casino Night themed getup.

Gizelle is dating now! This is the best. She tells us that all a guy needs to do to win her over is tell her that he’s spent a night in jail. Same, except by jail I mean the line for a midnight “Harry Potter” release. She meets this boring guy named Herman and decides to bring him to the yacht party anyway. Gizelle does not belong with anyone named Herman.

Okay now it’s time to party. Katie and Andrew also went golfing but I don’t care even a little bit. It’s yacht party time. Charrisse has to rock out as the only single lady at this boat party, which continues the theme of my experience at this fraternity formal because I somehow attended it without even having anyone in the fraternity as a date. True story.

Ashley’s husband is hammered and wants to jump overboard. I am really starting to love him. Herman is very out of place. Poor Herman, you were never meant to be here. Ashley’s husband’s pants are off now. Obviously all the ladies of Potomac are appalled at this white boy nonsense. Nonsense that you might say would most likely occur at a frat formal. Just. Saying.

We close the night with an invite of all all girls trip to… Delaware! Who needs Morocco? Who needs St. Barts? Anyway, I’ve been waiting for a trip from these ladies so we can see their true colors come out in close quarters. Katie says something about having a big clit that I am now going to ignore for the rest of my life.

This episode was fine but needed more. But I am well aware that the drama will amp up in Delaware. HAHA guys I made a joke there… LAUGH. 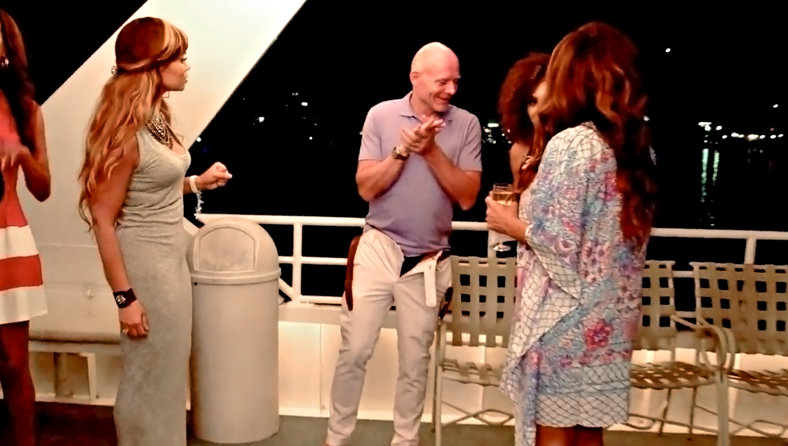