Sometimes, words aren’t even needed when the Republican presidential candidates come together to debate. Their confused behavior is allegorical to their party’s disorganization, their body language telling as much about them as you’ll ever learn from their attack ads, their dirty tricks and their outright lies.

Consider Saturday’s debate debacle, the last before Tuesday’s New Hampshire primary. In a spiffy, choreographed entrance, each of the seven candidates was to be announced and march out on the stage one by one to a continuous wave of applause.

Unfortunately, somebody forgot to factor in the acoustics of the applause for those off stage and the time needed between introductions so the candidates could hear their names.

So when ABC moderators Martha Raddatz and David Muir introduced them in rapid succession, things got as tied up as the inbound George Washington Bridge with a few lanes closed for a traffic study in Fort Lee.

Mr. Christie’s bully-boy act made Mr. Rubio – the Florida Senator – look like a baffled freshman in a playground argument with the senior tough guy.

Speaking of New Jersey Governor Chris Christie, he went first, But Dr. Ben Carson didn’t hear his own name called next. So he stopped in the wings, on camera. (One wondered: Was he considering dropping out of the race right then and there?)

Then real estate tycoon Donald Trump didn’t hear his name, either, so he, too, stood next to Mr. Carson.

You could see former Florida governor Jeb Bush further behind them, craning his neck, looking perplexed. He heard his name called and almost bumped Mr. Trump while passing him on the right.

“Ladies and gentlemen, the Republican candidates,” Ms. Raddatz said, prematurely, as she and Mr. Muir moved toward their seats. Before them, on the podium, only four of seven lecterns were occupied.

Mr. Muir then had to call out Mr. Carson a second time.

Alas, Mr. Trump still couldn’t hear. (Would he boycott this one the way he did in Iowa?)

“And lastly,” Mr. Muir said, “we welcome back to the debate stage, Donald Trump.”

More cheers. And then an off-camera voice.

“What about Kasich?” it said.

Curiously, Sunday’s Big Four current-events shows on the major, over-the-air networks made little of the introductory snafu and showed no video of it. But they feasted on two confrontations:  Mr. Christie against Mr. Rubio and Mr. Trump against Mr. Bush.

Mr. Christie’s bully-boy act made Mr. Rubio – the Florida Senator – look like a baffled freshman in a playground argument with the senior tough guy. Mr. Christie insisted Mr. Rubio is not ready to serve as president and excels only in reciting short scripts of about 25 seconds.

Incredibly, Mr. Cruz answered by launching into several nearly identical 25-second mini-speeches about President Obama and how he “knows what he is doing” and that his purposes are nefarious.

These weak points were embarrassingly off topic. They made Mr. Rubio sound like HAL, the spaceship computer that rebels against the astronauts in the movie “2001: A Space Odyssey,” and slowly loses his artificial intelligence as his storage cells are removed.

“There it is,” Mr. Christie said, interrupting Mr. Rubio. “The memorized, 25-second speech.”

On NBC’s Meet the Press Sunday, commentator Chris Matthews called Mr. Rubio’s answers “Implanted memory tracks. It was not a human response. It was strange.” Instead of boosting his own ability to lead or rebutting Mr. Christie, Mr. Rubio kept insulting President Obama as a stealth socialist.

The night before, in the instant analysis, Bill Kristol of ABC said Mr. Rubio’s repetitions: “Damaged him, a pretty big stumble.” In that Mr. Trump has labeled Mr. Rubio “The Boy in the Bubble,” Mr. Matthews on MSNBC said Saturday “Governor Christie popped the bubble. The little boy is now exposed . . . This is going to be in the history of bad performances. Rubio was assaulted by a skilled prosecutor.”

But on ABC’s This Week Sunday morning, Mr. Rubio told host George Stephanopoulos he would say the same thing the same way to Mr. Christie if it came up again and he laughed off a mocking ad already circulating among Democrats on the internet about his robotic repetitions.

“I would pay them to keep on running that clip,” Mr. Rubio said. “That’s what I believe.”

“I would pay them to keep on running that clip,” Mr. Rubio said. “That’s what I believe.”

After Mr. Trump defended the procedure, Mr. Bush said Mr. Trump tried to use it not for the public good but for a private parking lot for limousines at one of Mr. Trump’s gambling casinos

This unleased Mr. Trump’s belittling of Mr. Bush, a man Mr. Trump often calls weak, a word that, translated, means “not as tough as me.” Mr. Trump waved his right hand dismissively at Mr. Bush and interrupted him.

After debate over the details and results of Mr. Trump’s attempt at eminent domain, Mr. Trump added of Mr. Bush: “He wants to be a tough guy and it doesn’t work very well. Let me talk. Let me talk.”

Mr. Trump winced with exaggeration and then put his finger vertically over his lips, the way one might shush a crying baby.

When booed for this, Mr. Trump insulted the audience, which he called “doners and special interests.”

It seemed strange behavior for a front-runner favored to win the first-voting state in the long primary trail. Nevertheless, on ABC Saturday night, Cokie Roberts called it “Quite a good night for Donald Trump.”

But David Axelrod on CNN said “Trump may have lost some ground.” Also on CNN, David Gergen said “When you get booed, it doesn’t help.”

Opinion hardened overnight. “Everybody saw a bully there,” Mr. Matthews said Sunday of Mr. Trump. “It wasn’t good for Trump.”

To this, Mr. Sununu replied: “Actually, I think he didn’t. I think he flubbed the eminent domain issue badly . . . his answer on conservatism might get him a C in English class but it’ll give him and F in political science. Amongst conservatives, I really do think he made a fool of himself on his answer on health care, that he’s going to put a program in that’ll keep people from dying in the streets. There was nothing there.” 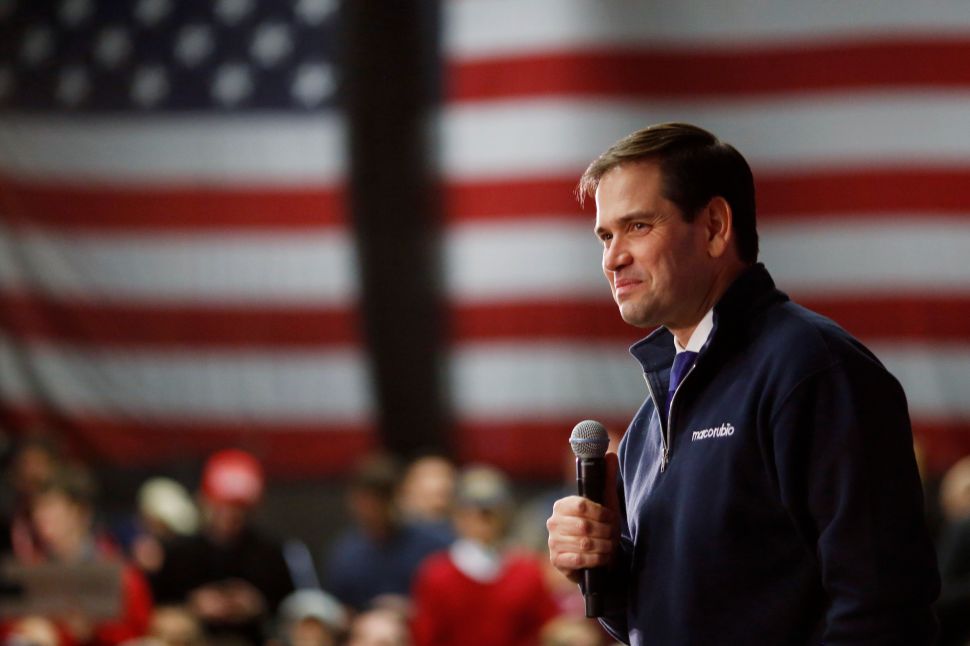