“If you like something CHiP does, you give it a thumbs up!” said a man on a makeshift stage, showing off a new robot dog that responds to a wristwatch style “smart band.” According to the signage, CHiP “feels hungry, needs attention, loves to play and goes to sleep.” The dog crouched and looked up with eager blue glowing eyes. A group of men in suits nodded.

An estimated 30,000 “play professionals” gathered at the Javits Center for the 113th North American International Toy Fair, “the largest toy and youth entertainment product marketplace in the Western Hemisphere,” to show their newest robots, slime, slides, board games, hover boards and more. There is serious money to be made in toys: According to The NPD Group’s Retail Tracking Service, the U.S. toy market grew to $19.45 billion in 2015, a 7 percent increase in domestic toy sales from 2014

CHiP seemed unimpressed, resting in the electronic and interactive section—basically the toys that you will see in the inevitable “8 New Coolest Tech Toys!” listicles.

The bigwigs, like Mattel and LEGO, set up shop on the second floor of the convention, occupying huge, privatized and walled-up areas like they were houses in Beverly Hills. People lined up outside the LEGO check-in desk like it was Studio 54 circa 1977.

Smaller companies were in the bigger level downstairs, organized into sections, like action figures, educational, board games and puzzles. This helped give a sense of what’s happening in each genre.

For example, the action figure section seemed to be gearing up for the release of Batman v. Superman: Dawn of Justice. One location had a pewter-hued large figurine of Wonder Woman and an armored Batman from the film, $149.99 each, displayed in glass boxes like ancient Sumerian necklaces. It was difficult to find figurines that kids could actually play with—where were the Transformers? The action figure world seems to be a victim of its own collectability. Maybe because half the reps here have scuffed-up Chewbaccas they wish they kept in their box.

Near the Trains, Models, Hobby section was a surprisingly retro display of Old West-themed toy guns. A rep came up immediately. Parris Manufacturing Company, the company, is based in Tennessee, he told the Observer. “We’ve been around since 1936. Some designs date back to the ’40s.” He spied a press badge. “We don’t usually do press because the way we are perceived,” he said, keeping the Observer moving along.

In the corner of the giant chamber was the Launch Pad section for newer, budget-conscious exhibitors like Ear Zings (magnetic earrings), Pillow Pants (basically pillows shaped like pants) and Shire Post Mint, the official makers of currency for Lord of the Rings, Game of Thrones and others. From Arkansas, Shire Post Mint was started by Tom Maringer, a Tolkien enthusiast who wondered what a hobbit would have in his pocket. He bought an antique coin press, started making coins, and—poof!—the hobby became a business. “George R. R. Martin hired us to create coins as a promotion in 2003. Then HBO came along. They wanted to dissolve all of Martin’s old contracts, but Martin refused,” explained Maringer’s son Robert, manning the booth with his sister Helen.

Another interesting booth was Eco Eggs, colorful eggs made from bio resin and recycled plastic. The eponymous company touts itself as “women and veteran owned.” Christine Lantinen, president, explained one of her buyers, Wal-Mart, wanted Easter eggs made in the USA. “That was the first big step. We took it further and created environmentally friendly versions.” Karen Edwards, the firm’s PR rep explained how the eggs had uses beyond Easter, “great for snacks, portion control, music teachers, and even an autistic sensory tool.”

Many exhibitors pitched themselves this way, mentioning how their toys were tactile, mechanical, good for kids on a developmental spectrum who need to learn to interact with the world. There was a sense among many toymakers that physical toys as opposed to screens were making a comeback. “I think things are going a bit retro,” Wacky Links CEO Vanessa Merit Nornberg said. “People see the importance of active toys instead of plugging your child in front of a screen.” Basically, iPad = iBad.

With that in mind, suddenly the distinction here between what helped kids grow and what turned them into robots became clearer. Toys that they could move, maneuver and make mistakes with seemed more crucial than ever.

Upstairs at Mega Tracks, a bullet shaped vehicle zoomed around the flexible track and then flew off a curve, crashing onto the carpet. “That’s O.K.,” the presenter said. “It’s all part of the play.” 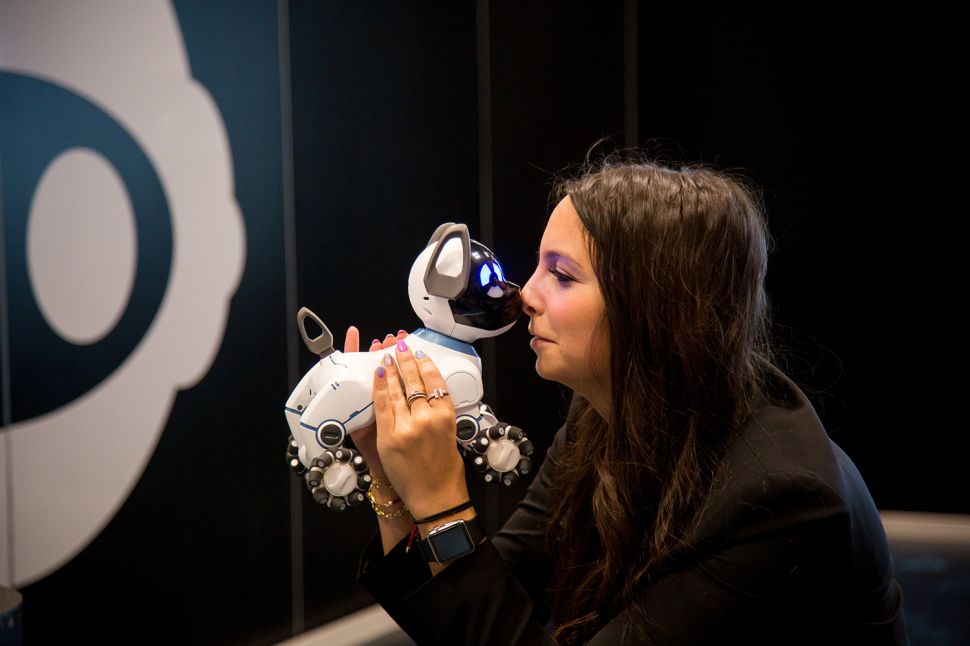