As the sun rose this morning after the curtain closed on the Republican presidential debate last night, there is virtual ecstasy throughout the upper echelons of the GOP. Marco Rubio won the first battle of the galactic war he declared against Donald Trump.

Mr. Rubio’s surprise attack against Mr. Trump, and his successful performance of taking the initiative and repeatedly putting Mr. Trump on the defensive throughout the debate, is only the first battle in the war of the worlds that has finally begun in earnest for the Republican nomination and control of the party.

Make no mistake about three things. First, Mr. Trump will now strike back against Mr. Rubio with a fury that will put both candidates to the test. Second, ignore the blather from those in the the political chattering class who suggest Mr. Trump is “unstoppable” or “invincible.” Third, regardless of the merits of the individual candidates, leading Democrats are right to fear that Mr. Rubio poses their greatest threat in the general election and leading Republicans have good reason to fear—based on the totality of polling—that Mr. Trump could lead them to a potentially catastrophic defeat in November.

Lets consider what happened in the debate, what we learned from what happened, and the implications for the campaign going forward.

Prior to the debate the GOP was in a state of near total panic about the prospect that Mr. Trump could win the nomination and gain control over the party apparatus. Mr. Trump is clearly the frontrunner in the race but his nomination is not nearly as certain as many television pundits breathlessly suggest, but many observers miss the full nature of the Trump challenge to the GOP.

The problem facing leaders in the conservative movement is that they do not have a candidate like Ronald Reagan to champion conservative principles in a manner that creates a broad appeal to the nation.  The default candidate of most conservatives is Ted Cruz, who is highly flawed, has demonstrated no capacity to govern and has developed the reputation of being widely viewed as a politician who plays dirty politics. He lacks broad national appeal.

Both candidates will now be tested in the crucible of hardball presidential politics.

The problem facing the GOP establishment is that while Messrs. Trump and Cruz are openly running by attacking them, establishment leaders have so far been unable to unite behind a candidate against them who can both win the nomination and have a strong chance of winning the election. That candidate will now be Mr. Rubio, who most GOP leaders will unite behind in force.

For the last month GOP leaders have been deeply worried behind the scenes that Mr. Rubio, who they strongly prefer over Messrs. Trump and Cruz, may lack the toughness necessary to first overcome the Trump challenge and then defeat the Democratic nominee in the general election.

In the last debate Mr. Rubio demonstrated that toughness, launched a preemptive strike against Mr. Trump, and pulled it off with great skill that enabled him to win the first battle in the galactic political war he initiated in the debate.

What was revealed in the debate was something that those of us who have been involved in high stakes campaigns have long known. The way to win a debate against Mr. Trump is to launch a barrage of attacks against him in rapid succession, and when Mr. Trump tries to talk over an opponent, respond by cutting him off and launching a new barrage of attacks on multiple issues.

Mr. Rubio succeeded in the debate because he employed this tactic, which Jeb Bush was unable to do and which Hillary Clinton failed to do in her first major attack against Mr. Trump over the issue of sexism. Mr. Rubio charged that Mr. Trump had employed foreign workers in his projects, that he made money by putting his name on clothes made by foreign workers, that he owned a private university Mr. Rubio charged was a ripoff, and that Mr. Trump refuses to release his tax returns—suggesting he has something to hide.

When Mr. Trump tried to answer those charges Mr. Rubio cut him off and charged that Mr. Trump keeps repeating the same platitudes about making America great and helping America win without offering any substance to back them up. The fact about debates is that when a bully meets a victim, the bully wins, but when a bully meets a bully, one of the bullies wins. On Thursday night, Mr. Rubio won.

The galactic political war of the worlds between Mr. Trump and Mr. Rubio has only begun and both candidates will now be tested along with Mr. Cruz in the crucible of hardball presidential politics. Mr. Rubio will receive substantial new donations from some of the wealthiest Republican donors and even more endorsements from elected Republican officials as the campaign moves into mega-high gear between March 1 and March 15. Mr. Trump will now launch a massive counter-attack against Mr. Rubio that will no doubt be withering and pose a test for both of them as the big primaries arrive between now and March 15.

As of today the GOP is locked in a three person race between Mr. Trump, Mr. Rubio and Mr. Cruz that will almost certainly become a two man race either before or after the March 15 voting. Mr. Cruz will need to win the Texas primary, where he now leads according to most polls. Mr Rubio will need to win the Florida primary, where he is now behind Mr. Trump. And Mr. Trump will now have to prove that he can withstand the intense scrutiny and pressure that has only just begun.

Ignore those who claim that Mr. Trump is invincible, since the big state voting that will soon arrive has not yet begun. It is easy to predict the grounds of the battlefield but impossible to predict who ultimately prevails.

Two things are clear. The first is that Campaign 2016 has now entered a galactic political war of the worlds that has become white-hot and nuclear with Mr. Rubio now having his moment to shine or wilt. The second is that as Republicans attack each other as liars, losers and frauds the Democrats will be running ads before the general election using tapes or the ugliest insults the GOP candidates are now hurling against each other in the final battle of the galactic war of the worlds that will end on election day. 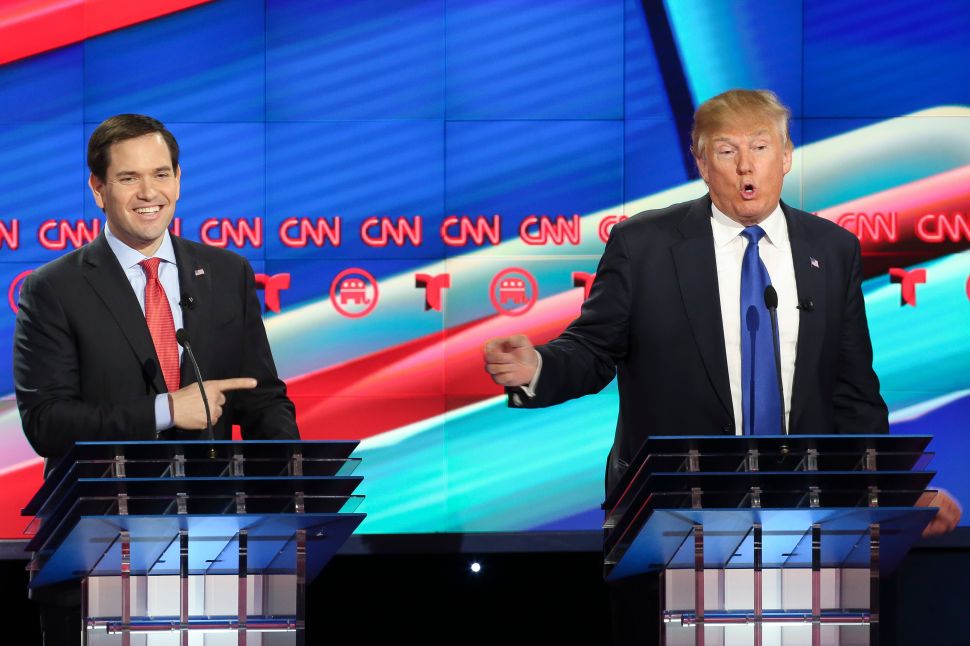