On Sunday, Russian TV host Dmitry Kiselyov, who enjoys the largest audience among news programs in Russia, announced in his prime-time program News of the Week the launch of a new documentary, whose goal would be to expose corruption in the U.S.—as opposed to the familiar story in Russian he’s sick and tired of talking about.

“This is not fair—to forget about American corruption,” he declared, “about how they get fat on the money of American taxpayers there.”

The title of the film—Emperor Obama—says it all, but the trailer, lasting more than 10 minutes, was shown anyway.

The first victim of attack was the American first lady.

“The information on our clients is strictly confidential,” says the Villa Padierna hotel manager to a young and beautiful female reporter. “But I can confirm that Michelle Obama really stayed in our hotel. She was our most famous guest. Since then, we named one of our villas after her. Villa Obama has three floors, two bedrooms, one swimming pool and a big living room—here is Villa Obama.”

“On the fourth of August 2010,” the manager continues, as the beautiful young reporter walks around the luxurious and spacious rooms, “the U.S. president celebrated his 49th birthday, and the very same day his spouse, Michelle Obama, arrived for her vacation in Spain. Here is her room.” Not ceremoniously, the reporter touches the silk sheets and very rare travertine marble. “Here are the official numbers: for the week starting August 4, 131,000 Americans were fired, losing their incomes and jobs. At that moment, Michelle Obama was on vacation, and the taxpayers were paying $6,000 a night for this hotel suit.”

Then, the first lady is shown walking outside out in the Spanish heat. “Michelle! Michelle!” thunders the crowd.

“Michelle Obama and her 9-year-old daughter Sasha were accompanied by their personnel and secret agents, by 250 specially hired Spanish bodyguards and 68 bodyguards brought from the U.S. As the American first lady eats ice cream, the street in Spanish Granada is totally blocked. Ms. Obama flew in on her husband’s airplane—plane No. 2, a Bowing-747—according to protocol, which transports the American president while plane number one goes through technical maintenance. At $11,000 per hour, Michelle’s flight from Washington, D.C., to the Spanish Malaga cost the US $150,000. The U.S. Air Force was sued for Michelle’s unlawful vacation—and for the fifth year, the lawsuit drags on without any resolution.”

Facing the sunset and obviously having had a good time in Spain herself, the reporter doesn’t want to let the topic of Ms. Obama’s vacations finish too quickly:

“The 44th American president goes on vacation twice a year—in the summer and during Christmas. Over the seven years of his presidency, American taxpayers spent between $10 million and $74 million a year on vacations for the first American family. To understand how such unbelievable expenses accumulate, the cost for only the plane and the bodyguards when Mr. Obama flew his family to Hawaii, in 2014, was $5,316,000.”

“Did you hear what happened in Flint, Mich.?” An American analyst steps into the video, “where the whole town was poisoned? Kids, pregnant women…How much money did he spend on his vacations, you say? $74 million? But he gave Flint only $5 million— $5 million to the poisoned people…as much as the launch of two military drones!”

At this point, the cover of the book by Michelle Malkin, Culture of Corruption, is shown to viewers—providing an idea as to the development of the story awaiting Russian TV viewers on Wednesday night.

Every word on the cover is in English, of course. “This book, with a cracked portrait of Obama on its cover, didn’t become a bestseller in the U.S.,” lamented the reporter—ignoring the word “BESTSELLER” written twice across the top. 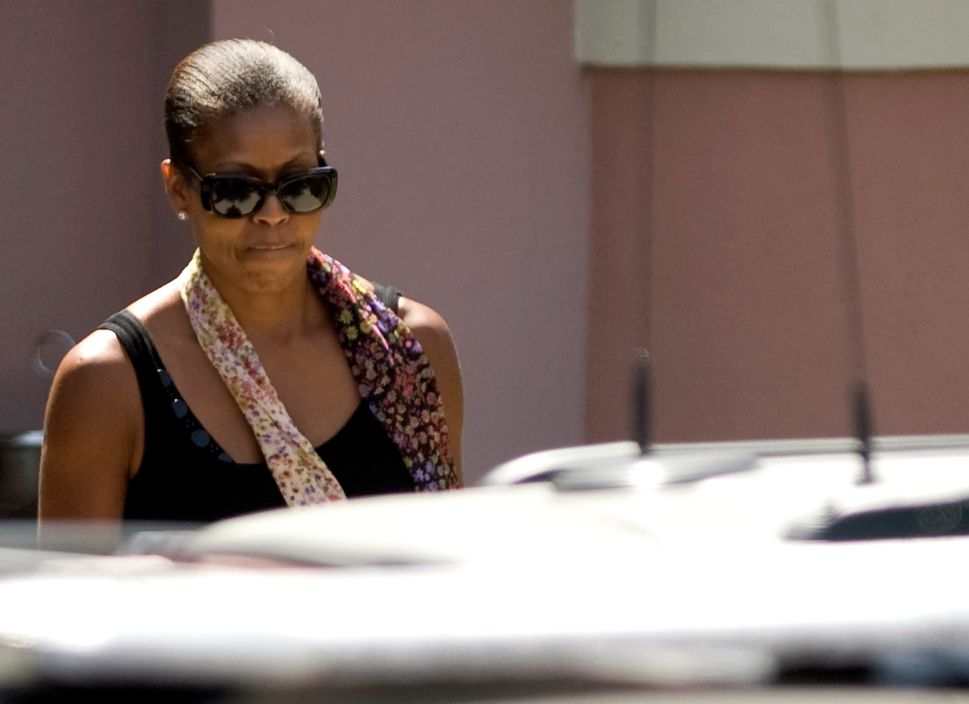