The New Hampshire Democratic presidential debate on Thursday made it official: Bernie Sanders and Hillary Clinton are battling to claim the mantle of progressivism to define the future. The question is not semantic. It is about the heart, soul and direction of the Democratic Party.

The most important outcome of the Democratic debate is that it is now clear that on the most important matter of presidential politics, which is defining the tone and substance of the campaign, Mr. Sanders is winning what President Kennedy once called the battle of ideas. The cause of progressivism is now becoming the cause of the Democratic Party and the core of the argument that Democrats will take to the country in the general election against Republicans.

Mr. Sanders was forceful and thorough in making his case that the economy is unjust and unfair, and that the reason for this injustice and inequity is that the power of big money from wealthy individuals and giant conglomerates has created an economy that is rigged against the poor and middle class. Ms. Clinton was forceful and aggressive in defending her record of proposing significant Wall Street reforms despite the fact that she is on the defensive about her acceptance of Wall Street campaign money and her highly paid speeches to Wall Street firms and other big business behemoths.

Chuck Todd and Rachel Maddow of MSNBC did a superb job moderating the debate. Their questions to the candidates were pointed, fair and unbiased and the result was a high quality debate where both candidates performed well and important issues were discussed in depth.

Analysts are divided about who “won” the debate. Here is my take. Mr. Sanders currently has a huge lead in New Hampshire, according to most polls, of between 18 and 30 points. I expect him to ultimately win the New Hampshire primary, but I also expect Ms. Clinton to come on strong and shrink this gap. On this level she probably helped herself in the debate which will probably help her close the gap.

Ms. Clinton often describes herself as a progressive, but has also said she is a moderate and centrist, suggesting she says different things at different times to different people—which is a major source of her ‘trust problem.’

At the same time, Ms. Clinton currently holds a substantial lead over Mr. Sanders in national polls of between 13 and 20 points in most polls. I expect Mr. Sanders to dramatically close this gap and he probably helped himself in this debate by going head to head with Ms. Clinton on equal terms and performing well, which negates the advantage she claims to have because of her “experience.”

Here is my one big prediction about what will follow the debate. Ms. Clinton was asked whether she would release the transcripts of her paid speeches to big banks and other big business companies and groups and any questions and answers after these speeches. She answered that she would “certainly look into it.”

I predict this issue—whether she will release the transcripts—will become a major and potentially defining issue in the coming weeks. As The Washington Post reported on Thursday, the Post has repeatedly asked the Clinton campaign for these transcripts: on January 23, January 24 and again February 4. Other news organizations have made this request as well. So far the Clinton campaign has declined to release them. After the debate there will be excruciating pressure on the Clinton campaign for their release. This will now become a high-voltage issue with very high stakes. Here is why the issue is so important:

It is indisputable, as Mr. Sanders suggests, that Ms. Clinton has received major campaign donations over many years from Wall Street firms and has received millions of dollars from her paid speeches to big banks and others. It is also true, as Mr. Sanders suggests, that while Ms. Clinton often describes herself as a progressive she has also said, at other times as recently as last fall, that she is a moderate and centrist, suggesting she says different things at different times to different people—which is a major source of her “trust problem.”

Similarly, there is no doubt whatsoever that Mr. Sanders is opposed by the entire political, financial and corporate media establishment, and that virtually the entire Democratic Party establishment supports Ms. Clinton and some major powers in the financial establishment give her money through various channels. She should not have described herself during the debate as the anti-establishment candidate. That is simply not true. Period.

To her credit, Ms. Clinton has offered substantial and detailed proposals to reform Wall Street, for which she deserves credit from progressives, even if she does not go nearly as far as Mr. Sanders in calling for breaking up big banks.

Running against Ms. Clinton, Mr. Sanders has moved the entire Democratic debate to a debate about who is more progressive and more populist. This is another huge victory.

The call for release of the transcripts of her Wall Street questions is such a powerful issue because it goes to the heart of the matter about how progressive and populist she is, and to her ability to generate or lose the trust of voters.

There are three possible outcomes to the transcript issue. Possibility one: she refuses to release them, which would be a political disaster for her. Possibility two: she releases them, and we learn that when she addresses Wall Street power behind closed doors she panders to them, thanks some of them for campaign donations or suggests policies that contradict her claims to be populist and progressive. This would seriously damage her credibility. Possibility three: she releases them, tells them where they have gone wrong and why she supports strong reform. This would make her credibility soar.

In any event, Mr. Sanders is winning the big battle of ideas of the presidential campaign. Running against Ms. Clinton, he has moved the entire Democratic debate to a debate about who is more progressive and more populist. This is a huge victory for him. Running against Republicans, Mr. Sanders has seized the high ground of public opinion for the progressive movement, which is why he leads Donald Trump by such huge margins in some recent polling. This is another huge victory for Mr. Sanders.

As the Democratic primaries and caucuses continue into the spring, it becomes increasingly clear that because Mr. Sanders is winning the battle of ideas the race for the Democratic nomination will be a contest to determine which candidate speaks for the progressive populist wave that is gaining steam in American politics. This is good for Mr. Sanders, good for Ms. Clinton, good for Democrats and good for America. 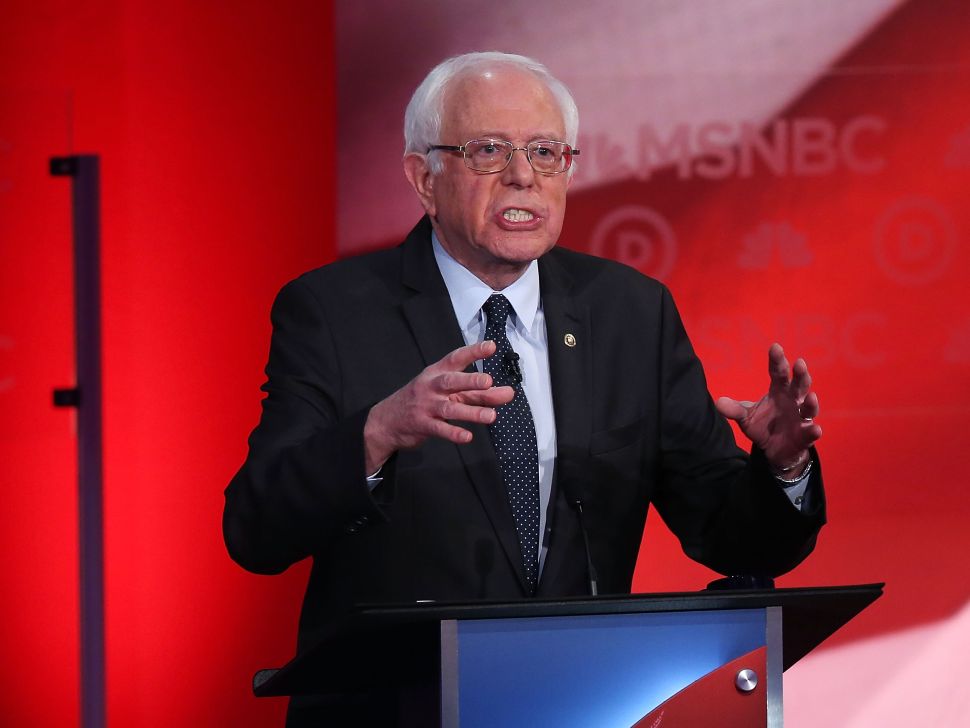