At its best, a breakfast sandwich exists in a state of grease. Shimmering with animal fats, steam rising as if from a natural spring on a wintry morn—the sausage, egg and cheese is three friends on a roll. Some friends they are indeed: fun but the kind one wants over only occasionally. They break the china, offend the senses and make off with the silverware. But what fun while they’re over.

For those who desire moderation in the ways of the breakfast roll, I would advise against ordering La Bodega ($13), one of the four sandwiches offered for breakfast at High Street on Hudson. For when it comes on a wooden trencher, it burrows first into one’s eyes, iridescent and trembling, then into one’s nostrils—meat whiff, cheese smell, baked good—and one finds the sandwich in one’s hands, one’s lips, one’s mouth and then holy fuck.

Aged cheddar hath heat bound to glistening malted sausage surface, which like lovers loving lies on a pillowy bed of soft scrambled egg. And this—the holy trinity—is held in a fresh baked sage-black pepper biscuit. The biscuit isn’t just the vehicle any more than a Bugatti Veyron is just a vehicle. True, it is a method of conveyance, but it ennobles all it carries.

As for that sausage, what makes it malted, what exalts it and makes it salted, worth the myocardial infarction, that’s the secret of Alexandre Bois, baker extraordinaire, amateur homebrewer, fan of the fermented and consumer of the cultured. Mr. Bois—who with chef Eli Kulp, chef de cuisine Jon Nodler and pastry chef Sam Kincaid is responsible for what issues forth from that open kitchen—tweaks the classic, substituting maple syrup for malted rye syrup. What weirdness and how sweet; what madness and how neat.

They say don’t fill up on bread. They’ve never been to High Street on Hudson where bread’s the thing. The original High Street on Market, which opened in Philadelphia in 2014, started as a bakery, so the hearth is at the heart of things. The bread here is the art of thing. Bois is King Crumb, and Kulp is the Emperor. When the bread comes—thick slices toasted on a trencher at the break of dawn and laden at the close of day—it isn’t filler. It’s killer.

High Street plumbs the pantry of the arcane. Among the best breads offered is Anadama, a regional bread from New England. Anadama is a 19th century cornmeal and yeast bread made, primarily, around Gloucester, Mass. How Bois, a Frenchman, came upon Anadama is indicative of an insatiable curiosity and catholicity of taste. But he doesn’t leave the bread as is. As he does with the sausage, he makes it malted. Mashing the grain the way a brewer might—bread, after all, is simply solid beer—the result is incredibly tacky crumb within a caramelized crust. It’s a dark bread storm cloud, fluffy and ominous.

He makes it malted. Mashing the grain the way a brewer might—bread, after all, is simply solid beer—the result is incredibly tacky crumb within a caramelized crust.

In the morning, it’s toast ($5), accompanied by a slightly tangy cultured butter. At night, it gets fancy ($14): Nodler and Kulp layer on far-out ingredients, like smoked eel, fermented radish and parsley. The eel—delivered squiggly from a Connecticut eel farm—have been ground and smoked and glazed and broiled. They harken back to the bread’s coastal origin. A play on a riff on a quote from a play no one read. And yet, it still resonates.

Shit gets weird at High Street on Hudson at dinner. Lamb tartare! The lamb’s raw, but the cashews are cultured—the celery root burnt and the rye malted. A bucatini ($23) is made with seaweed and accompanied by njuda, a spicy spreadable pork sausage from the south of Italy. Caramelle ($25) pastas that look like saltwater taffies are stuffed with cauliflower-fennel-and-onion puree and topped with julienned raw vegetables that mimic cheese in a beurre monte made with buttermilk. Huh?

But Kulp is a student of Batali and Ladner and knows, no matter how far out a pasta goes, it must always return to the true north of delicious.

Friday morning and High Street on Hudson fills with smoke. Something went south in the kitchen I suppose. The morning light filters through the now thick air, and West Villagers, largely unaccustomed to even the most mild of disasters, shift uneasily in their seats. It smells like a campfire. There’s danger in the air.

Not everything is a hit at High Street. On one night, the grilled squid ($14) was as tough as a dime store detective and so chewy as to confound ever the most athletic masticator. This could have been an error in execution, but the fried razor clams strips ($16) are a conceptual misfire. Meant to be a higher-end nod to those clam-shack classics, whatever delicate brininess of the clam there was is lost under the thick breaded coating.

Still, much more common are the hits, and those are even more impressive for their wild and wonderful ways. Nearly every piece of the compact menu hits a target that we can’t see. Who knows, really, what Kulp, Nodler and Bois are going for or what the destination is for their strange yeast-y mission. One has the feeling they’re flying by the seat of their pants or by the beat of their hearts and that they like it that way. Fearless, they’ll keep rising until they reach the sun or until the bread is done and taken, steaming from the hearth. 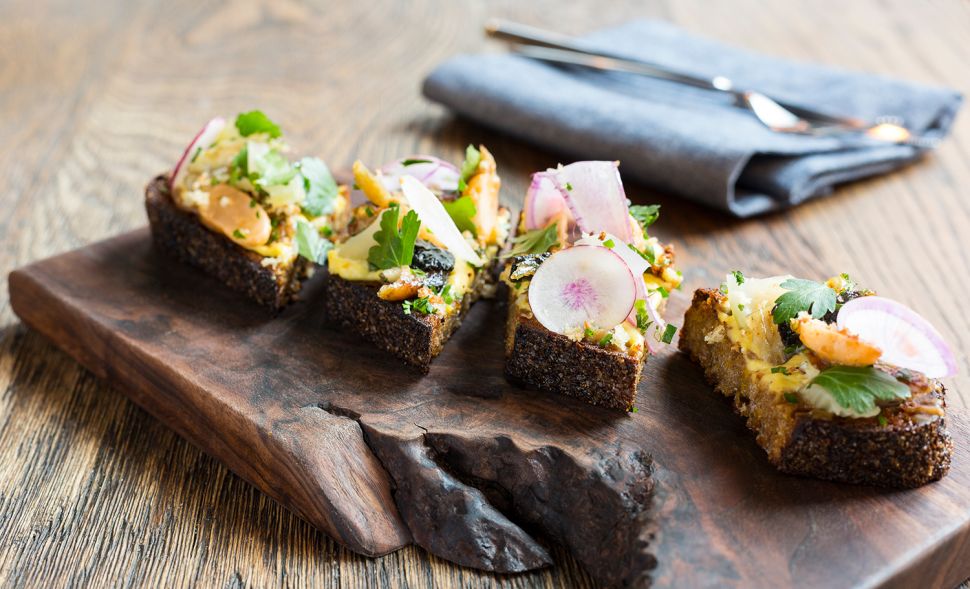