Hood by Air isn’t known for your typical beauty looks. In fact, the lead nail technician backstage at the Sunday runway show said she’d only gotten a request like this once in her seven years of working with designers.

“One time in London, Vivienne Westwood walked up to me and said ‘I just want her to look like a dirty whore,’” Dawn Sterling said backstage at the show. The artist has worked with brands like Balmain and Nina Ricci in the past. “So when Shayne told me what he wanted for this I was like ‘I know exactly what you’re talking about.’”

What he was talking about was a look of nonchalance that kids in underground nightlife have been rocking for a while now according to Ms. Sterling. “It’s like when you’re gardening or you’re fishing and you get your nails dirty, but when you clean them, you just can’t get the dirt out.” she explained. “So you’re draped in Hood By Air, you have on your $20,000 coat. You’re fishing, you’re gardening but you don’t [care] what the outside world thinks because you’re amazing, you got the memo, and you like your nails with a little bit of dirt under them.” To accomplish that particular aesthetic, the nail tech blended acrylic paint, clear nail polish and Chanel polish (“I was excited to [screw] up something so chic as Chanel”) for a faded, burnished look that had polish bleeding onto the fingertips.

To match that vibe, Inge Grognard, lead makeup artist for MAC, put her focus on the eyebrows, filling them in with acrylic paint, working in cuts to rope in a gang reference and doing a few split eyebrows with sharp corners. “I didn’t want to have a full makeup on the face [look], I wanted it kind of raw,” Ms. Grognard said, when asked about framing the bold, off-kilter brows. “When you do the full face and the eyebrows, it becomes like drag and I didn’t want that. I still wanted them to be human and I wanted their skin to breathe.” So besides some “retouching” to cover up pimples and redness, Ms. Grognard left the skin alone.

“It’s really all about being in a gang, but not in a negative way,” the Jed Root-repped artist explained of the overall concept. “When you see someone wearing Hood By Air you sort of know it’s HBA, but it’s not about prison or anything like that, it’s about positivism.” That gang concept made for cohesive looks that were individualized based on each model. Frequent HBA collaborator and hair stylist Amy Farid worked the most within this realm.

“We have about five or six looks today,” the Bumble and bumble lead said, counting them up. To create them all she counted Bumble’s Thickening Hairspray and Does It All as key products. “But the main theme is pilgrim — that’s the name of the show. Everything we did is referencing a pilgrimage.”

Many times that inspiration point took on literal meanings. One model’s dreadlocks were made to stand on top of his head with a big square pilgrim buckle pinned onto it. Other models had colonial-style rolls glued to the sides of their heads or wig blocking tape as a nod to the elaborate wigs pilgrims wore. Elsewhere, the hair team of over 30 assistants used cellophane to wrap the models’ crowns after their hair had been heat foiled into fluffy, frizzy curls.

“The cellophane is a direct reference to the airport when you see the suitcases and bags that end up having to be wrapped up,” Ms. Farrid said. Specifically, she was referencing how some travelers wrap their suitcases (mostly in Europe) to discourage luggage tampering. When asked how that meshes with the gang aesthetic of the eyebrows and the rough and tough beauty of nails, Ms. Farrid didn’t miss a beat.

“Because it’s Hood by Air, we make anything into our own gang and our own culture” Ms. Farrid explained. “It’s all about escaping from this religious persecution like the pilgrims did from England to come to this free land and creating your own colony. That’s what we’re doing here with Shayne and we’ve done it for years. There will always be that street reference of where he started from, that urban t-shirt line that it was. We’ll always have that as a reference but it’s about balancing that with these elevated concepts.” 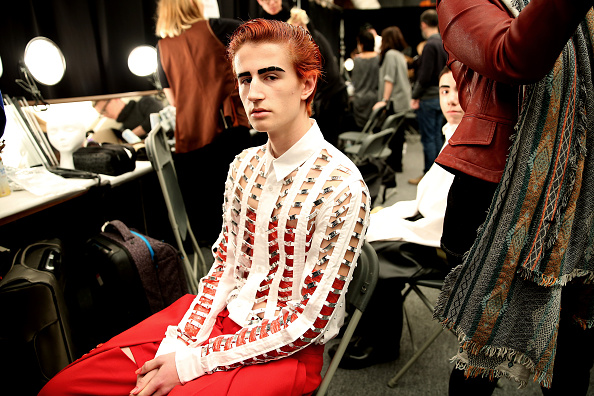