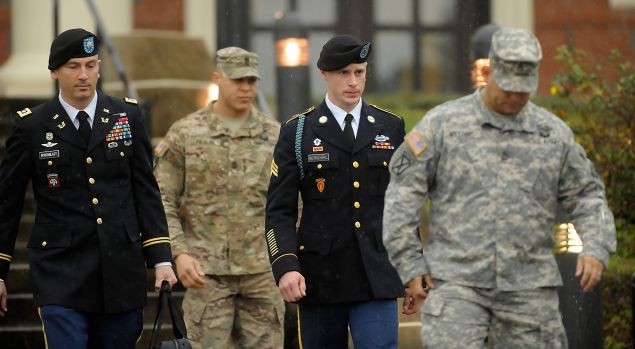 Bowe Bergdahl attends first hearing In Army court martial at Fort Bragg. (Photo: Sara D. Davis/Getty Images) FT. BRAGG, NC - DECEMBER 22: Army Sgt. Bowe Bergdahl (2nd R) of Hailey, Idaho, leaves a military courthouse with his attorney Lt. Col. Franklin Rosenblatt (L) on December 22, 2015 in Ft. Bragg, North Carolina. Bergdahl was arraigned on charges of desertion and endangering troops stemming from his decision to leave his outpost in Afghanistan in 2009. He was captured by the Taliban and spent five years in captivity before being freed in a prisoner exchange. (Photo by Sara D. Davis/Getty Images)

“So, it’s come at last. At last, it’s come. The day I knew would come at last has come, at last.” After a windup lasting five episodes stretched out across two months, Serial host Sarah Koenig has finally elected to reveal what Serial Season Two is actually about: the ill treatment Sgt. Bow Bergdahl observed and received from his superiors. Treatment so poor it made him afraid for his life and the lives of his fellow soldiers. Treatment so poor he elected to run from his base and trigger an all-out manhunt just to call attention to it because he felt he had no other choice. What was this grievous abuse, this shocking neglect, this malign disregard for the safety of the American fighting man?

An officer yelling at grunts for violating the dress code.

Yes, for reasons that completely baffle me even now, Koenig refused to divulge this information—vital to understanding who Bergdahl is and why he did what he did—until “5 O’Clock Shadow,” the season’s sixth episode. And it turns out the title is entirely appropriate. Bergdahl’s break with command truly began when, after a dangerous days-long mission recovering broken-down vehicles so that they couldn’t be seized by the enemy, a lieutenant colonel chewed out the returning troops for failing to shave. A dick move, to be sure. But had Bergdahl spent a little less time watching The Bourne Identity and a little more watching, say, Full Metal Jacket, he might have been slightly less shocked—shocked!—by the idea that sometimes people in the armed forces are occasionally a bit brusque. This is a message you start picking up on the moment the first jut-jawed, slope-browed, larynx-shredding jarhead caricature shows up on your favorite cartoon show when you’re five years old. It’s shitty to endure, but reacting as though it’s tantamount to criminality tells you a lot more about Bergdahl’s sense of self-worth than it does about the Army’s sense of his lack of worth. And according to Koenig, he only heard about it second-hand! God knows what kind of “I’m unshaven Spartacus” routine he’d have tried to pull had he been there to hear it for himself.

Bergdahl was present, and indeed was one of the main attractions, at a later incident, the one that truly set him on his course to triggering a DUSTWUN. Sent to a remote lookout station with a two-man foxhole that couldn’t accommodate his six-man team, Bergdahl and his comrades understandably took it upon themselves to dig out an expansion, doffing much of their bulky gear and stifling uniforms in the process to help beat the heat. Again, it’s tough to blame them for that, or for resenting getting expansively chewed out by that same lieutenant colonel in front of an Afghan delegation for this relatively minor insubordination. The problem is that their casual-Friday scenario played out in front of the lens of a photographer for the Guardian, which means pics of Bergdahl and the others—underdressed, underarmored, underarmed, and in Bowe’s case jauntily smoking a pipe on some “Lawrence of Arabia shit”—were beamed out worldwide. Sure, it reveals a potential vulnerability for future attackers, a far more convincing argument made by one of the officers than “this is the first step on the road to My Lai.” But mostly it just makes everyone in the chain of command look bad, and shit flows downhill, as anyone who’s held a job literally anywhere can tell you.

But instead of taking his chewing-out in grumbly but basically accepting stride, as you might do if you failed to wear a hairnet at McDonald’s or didn’t attach a cover to your TPS reports, Bergdahl concocts an extravagantly paranoid scenario in which his life is now literally in danger from his own commanding officers. He believes that they are so desperate to cover up and/or punish him for the incident that they will send his platoon on a suicide mission, thereby eliminating the embarrassment forever. This is the danger he’s determined to highlight when he flees from his base into enemy territory. As Bergdahl himself might put it, good grief.

And right there, the contradictions inherent in Bergdahl’s personality emerge clear as day. It’s not that he’s opposed to danger per se; his DUSTWUN misadventure and his two subsequent attempts to escape from the Taliban prove that. Moreover, Koenig reports his friends and fellow soldiers recalling him frequently agitating for more engagement with the enemy, more “killing bad guys.” Not that he’s there to “rape, burn, pillage, and kill,” mind you, to quote the gallows humor he reportedly took very poorly when a higher-up joked that this was not their mission in a briefing before deployment. Heaven forbid anyone believe Bowe Bergdahl is anything less than a real American hero! He was equally keen on COIN, the well-intentioned but impracticable boondoggle of a military doctrine whereby soldiers slowly gain the trust of the locals and cut off insurgents’ support at the roots, effectively impossible to do in a series of brief months-long rotations. Sgt. Bergdahl was there to help, goddammit, to fight for truth, justice, and the American way. It wasn’t danger he feared, it was danger that didn’t help him prove he’s a supersoldier, a man of honor and valor, a true knight. (This was the thinking behind his pointless acts of Arthurian self-abnegation, like sleeping directly on his bedprings instead of a mattress and snuggling a tomahawk to sleep every night.) Getting yelled at bothered him because he expected a hero’s welcome; not receiving it was tantamount to a threat against his personal safety. And if he couldn’t be a hero playing by the rules, then by god he was going to break them. Thus was the ludicrous AWOL mission that began the season conceived.

Perhaps Koenig sees all this. Her storytelling is so molasses-slow that it’s impossible to say for sure right now—which is part of the problem, of course—but it’s certainly possible she recognizes Bergdahl for the largely harmless but borderline delusional narcissist he is. (Her assertion that we need to dig deeper into his past to understand him doesn’t bode well, however.) And I’ll note again for the record that viewing him this way does not mean I believe he deserved years of torture or a subsequent life sentence in military prison. He’s just a doofus. But why wouldn’t you establish this up front? Why this absurd drawn-out bait and switch? Is it because you fear it’d make the audience less sympathetic? Well, yeah—the truth does that sometimes, an unfortunate side effect of freaking journalism. Is it because you don’t want to alienate Mark Boal, your production partner, who’s built a relationship with this guy on the expectation he’ll get a movie out of it? If that’s a risk you don’t feel you can take, you probably shouldn’t cover the story. At the very least you shouldn’t structure your preposterously long weekly podcast on the topic in such a way that you make an action-movie hero out of a Coen Brothers character at best.

PS: This week Koenig also uploaded the first of what she promises will be daily updates on the case of Season One’s subject, Adnan Syed, who’s currently back in court over his allegedly poor representation during his trial. I mean, I think that’s what it was about. Most of what I remember is Koenig joking on the phone with her producer about her hotel’s complementary leopard-print robes, and marveling over the fact that a witness wears high heels and red lipstick. LOL, a teenager was murdered, but how crazy are these bathrobes, amirite? 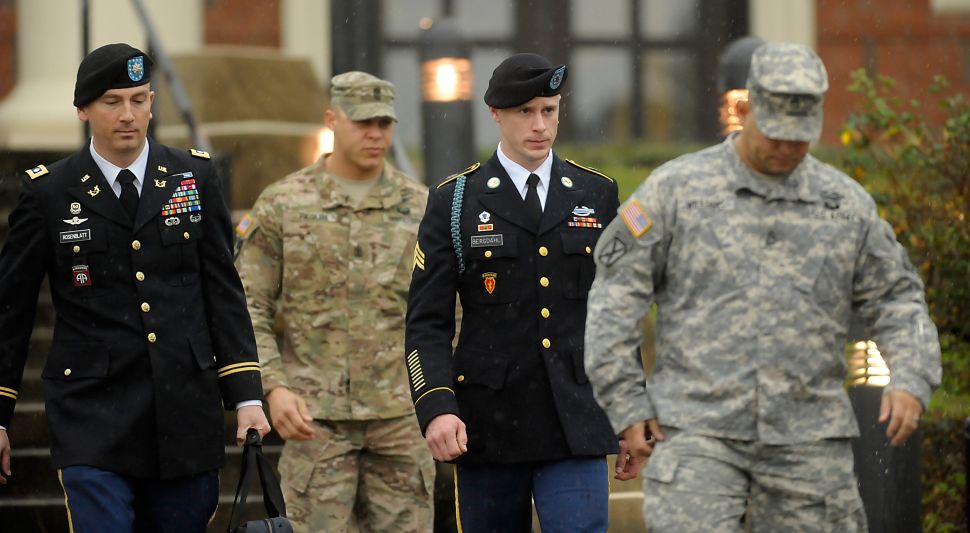