Renting and selling real estate in New York City, a person gets accustomed to compromise. Sure, the bathtub is in the kitchen, but, hey, look at all that closet space! Technically, yes, it’s an alcove studio, but you put in a curtain and loft bed—perfect for a share! That Hells Angels clubhouse across the street? Oh, you barely notice it after a while.

As Citi Habitats agent Eboni Stoute recently discovered, though, some trade-offs just can’t be finessed away.

Ms. Stoute had the listing to a two-bedroom apartment in Fort Greene. At just under $3,000 a month for a spacious two-bedroom with a washer/dryer and heat and hot included, the place was a bargain.

“The bedrooms were large, it had tons of storage, it had original details, it was beautiful,” she said.

There was just one catch: The apartment sat directly above a cigar lounge. “And there was that smell of cigars,” she said. “No matter which room you went into, it was there.”

Ms. Stoute showed the apartment to around 10 or 15 clients over a period of months—warning all of them beforehand about the smoke—but she was never able to close the deal.

“I would explain it in my ad or speak to them over the phone and say, ‘Hey, this is above a cigar lounge,’ and they would say, ‘Oh, no, no, no, that’s O.K., that’s O.K. I haven’t seen any two bedrooms in this area for this price so you know I’ll come and take a look,’ ” she said. “And then of course after they see it, they say, ‘Oh, it’s a beautiful apartment, and we’re going to think about it.’ And then in a few days I’d always get the email or the text and they’d say, ‘Well, after thinking about it and looking online, a lot of the neighbors already complain about it, and I’m allergic to smoke, so…’ ”

“People are people and will do basically anything for a deal,” she said. But living in a walk-in humidor is apparently a step too far.

Ms. Stoute’s experience is an extreme example, but she’s far from the first (or last) broker to have a deal go up in smoke. (Literally!)

“It was a nice building, but you stepped five feet in, and you could tell there was a smoker in the house,” she said. “I kept my cool, said, ‘Oh, it’s very nice, a nice size.’ I’m selling the apartment. Finally, my client said something like, ‘You don’t smell that smoke?’

For an increasing number of customers, cigarette or cigar smoke leaking in from a neighboring unit is a dealbreaker.

In recent years, more and more New Yorkers have come to value smoke-free residences, Mirador Real Estate salesperson Christine McAndrews told the Observer. And perhaps in an effort to attract them, some city landlords are also moving on this trend. In 2008, for instance, Pan Am Equities banned smoking in its 30-plus New York apartment buildings. In 2013, the Related Companies announced plans to prohibit smoking in its rental buildings across the country.

Mirador represents a number of smoke-free rental buildings, which, Ms. McAndrews said, many of her clients find a welcome amenity. And for an increasing number of customers, cigarette or cigar smoke leaking in from a neighboring unit is a dealbreaker, she said.

In fact, one of her clients is currently selling her Upper West Side co-op at a loss just to get away from a chain-smoking neighbor.

The woman hadn’t noticed the smoke leaking into her apartment during the buying process, but since she’s moved in it’s become intolerable, Ms. McAndrews said.

“She works from home and can’t deal with it, and the board (which has no rules against smoking in apartments) isn’t willing to do anything about it,” she said. “So she’s selling her place at a loss just to get out and looking [to rent] specifically in a smoke-free building.”

Citi Habitats’ agent Tiga McLoyd is similarly working with a client who is selling at a loss to get away from a smoking neighbor. The client closed on the apartment in November and is now putting it on the market because of cigarette smoke from a unit somewhere above her that drifts in through her vents.

Mr. McLoyd wasn’t involved in the original purchase, but he said the woman stands to lose around $100,000 on the deal. “And she’s actually willing to lose that much money just to get out.”

Mr. McLoyd is about to list a different apartment where smoke from a neighborhood is also a problem, and he said he’ll be careful to disclose the problem to any potential buyers.

On the one hand, it’s an ethical matter. “If I looked at an apartment and there was smoke coming in and nobody told me, I would be pissed as hell,” he said. Additionally, from a practical standpoint, knowing about the problem before you move in gives you a chance to do something about it.

“The fortunate thing is that this apartment needs a complete renovation and when you are renovating you can take steps to mitigate [such problems],” Mr. McLoyd said. “Smoke actually tends to come in through ceiling lighting fixtures and outlets, so you can seal them. It’s not 100 percent, but it helps a lot.”

Like Ms. McAndrews, Mr. McLoyd said he has seen increased client interest in non-smoking buildings, something he believes stems from then-Mayor Bloomberg’s 2003 bar and restaurant smoking ban. Basically, people stopped coming home at night smelling like ashtrays and came to realize they kind of liked it.

‘New York has evolved, and folks are very into their well-being and have gotten away from smoking.’—David Maundrell, Citi Habitats

“If smoking were not banned in restaurants and bars, if there weren’t that momentum and precedent, I don’t think we would be seeing this,” he said.

David Maundrell, Citi Habitats’ executive vice president of new development marketing for Brooklyn and Queens, said he first noticed the trend around five years ago when new rental buildings he was working with began discussing the idea of going smoke-free.

At first, he told the Observer, he was against it. “I thought it would alienate certain people who were renting. They were large buildings, so you wanted to cast a very wide net.” But, he said, “We went ahead with it, and it was very well received. New York has evolved, and folks are very into their well-being and have gotten away from smoking.”

According to the city Health Department’s latest community health survey, in 2014 13.9 percent of New Yorkers smoked, which marked the lowest rate since the survey began in 2002.

Corcoran broker Beverly Rouse is on the board of her co-op building 131 Thompson, which, she said, went non-smoking five years ago, prompted by the case of a longtime renter and chain smoker who had for years irritated several neighbors with his secondhand fumes (despite, Ms. Rouse said, being otherwise a “very nice gentleman”).

“When the sponsor took a look at the apartment, they had to basically rip out the walls and floor to get rid of the smell because he had lived there for decades,” she said. “And we made the decision that it might be good for us to make this a non-smoking building.”

The process by which a co-op can go non-smoking depends on the building’s corporate documents, but in general, it requires buy-in from a two-thirds majority of shareholders, said Dean Roberts, a real estate lawyer at Norris McLaughlin & Marcus. Violators can, in theory, be evicted, but Mr. Roberts said he had never actually seen such a case progress beyond the initial court notices before the parties settled on their own.

Likewise, Mr. McLoyd suggested the likelihood of a rental building actually evicting a tenant over violations of a smoking ban was slim to none.

“They will send them letters, their attorneys will get involved, but at the end of the day they really aren’t going to do an eviction because it’s just so much time and money,” he said.

Better to just find a building that will let you smoke in the first place. And, Ms. McAndrews said she does occasionally come across clients for whom a non-smoking apartment is a dealbreaker.

“I had someone call the office and ask me about one of our properties,” she said. “We were talking about it, and she asked if it was a smoke-free building, and I said yes, expecting that she was going to say, ‘That’s excellent.’ But she was like, ‘Oh, then, no, I can’t live there.’ So it’s a quality of life thing for people in both directions.”

That’s particularly so among the fabulous sorts for whom a Surgeon General’s warning is but an enticement to further indulgence. Your fashion types. Your entertainment crowd. Your… Europeans.

“I deal with a lot of families from Europe and clients in fashion and entertainment,” said Douglas Elliman broker Jared Seligman. “They will host dinners and parties and events, and generally speaking, if they are entertaining, there are people who are smoking or who would like to smoke. So, as unpopular as smoking is in this day and age, they would actually look at it as a huge negative to have a smoke-free building.

“Your own home right now is the only place left where you can smoke,” he added. “Besides like the middle of the street.” 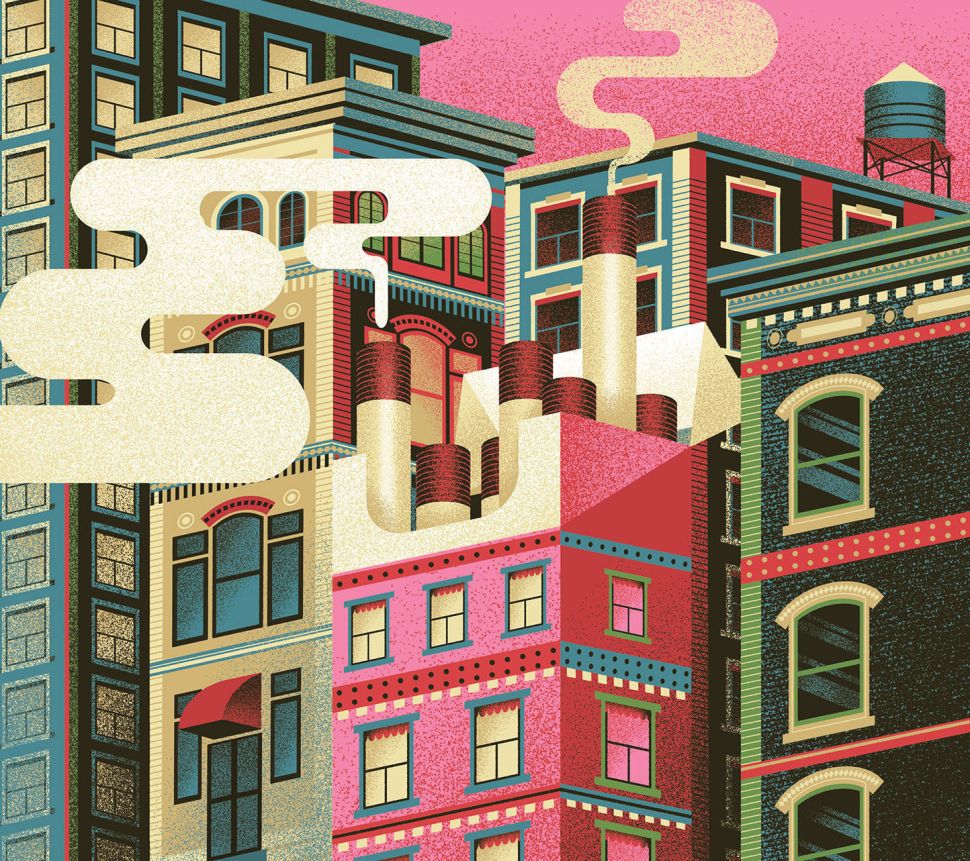