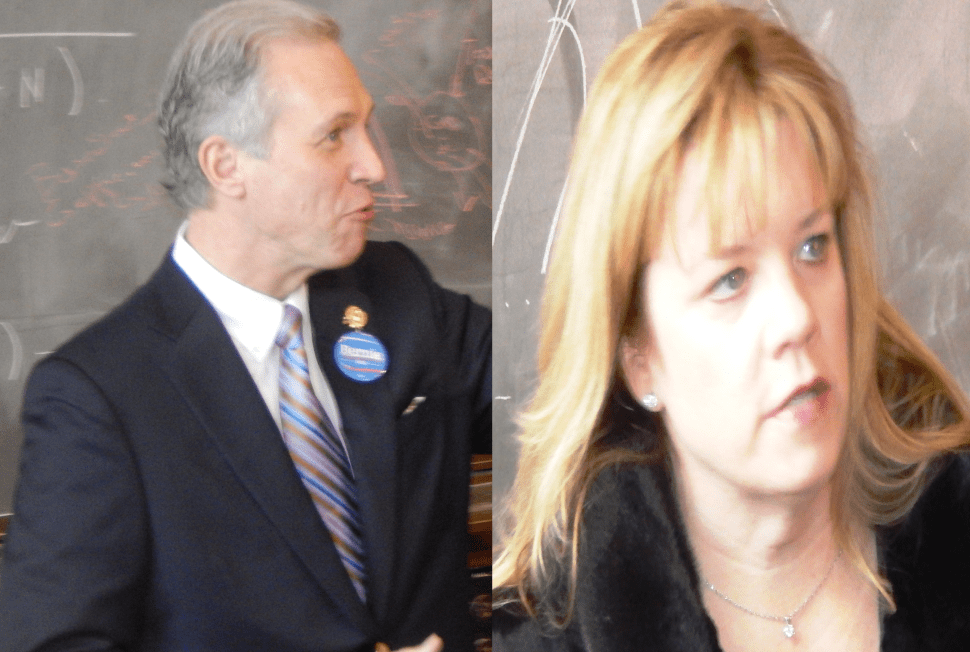 PRINCETON – Politics never intended to be an exact science, a condition undoubtedly unnerving to a neurosurgeon like Ben Carson as his presidential campaign tanks, but in the same Princeton University lecture hall once graced by Albert Einstein, the equation went something like this: Democratic Party youth + presidential politics = advantage Bernie Sanders.

It’s a reminder of the unpredictable dynamics of this game for Clinton forces, as they struggle to look, sound and act more hip under the organizing onslaught of a 74-year old Democratic socialist who routinely walks out on stage to the strains of the Tramps’ “Disco Inferno.”

Eighty-three percent of Democratic voters between the ages of 17 and 29 back the insurgent, people-power candidacy of Sanders over former Secretary of State Clinton, a percentage that would seem to hardly make Clinton the preferred choice in seats packed with members of the New Jersey High School Democrats (NJHSD), College Democrats of New Jersey (CDNJ), and New Jersey Young Democrats (NJYD).

Despite appearances, it’s a little more complex, insists Sam Fogelgaren, president of the CDNJ. Asked to pick a prez candidate on the occasion of the organizations’ first annual joint convention, “Preparing to Lead,” Fogelgaren examined the equation in detail.

“As an organization we are neutral in all primaries – specifically this one because College Dems of America is part of the DNC,” 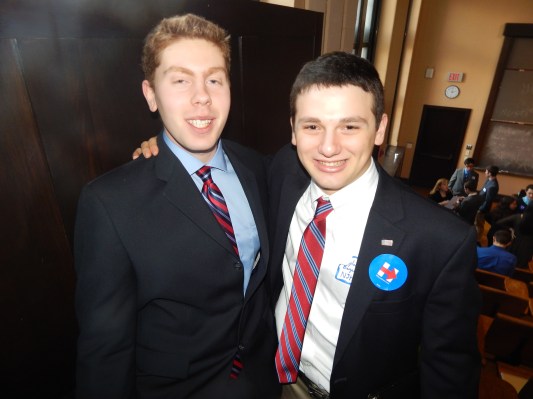 said the young leader. “In traveling to campuses and talking to students, it seems that there’s a good balance of support for both candidates. On campuses, Sanders is more effective than Clinton at engaging people who may not regularly engage in primary campaigns, however Clinton is holding her own.

“She seems to do well with students previously engaged in the political process, students who are perhaps more familiar with the way government and politics operates,” added Fogelgaren, a day before the latest CBS News presidential tracking poll showed Clinton crushing Sanders in South Carolina, the next primary state, 59-40%.

But on those occasions Saturday in Einstein equation land when the crowd supplied the loudest applause lines, invariably the energy flowed in the direction of the Vermont senator. 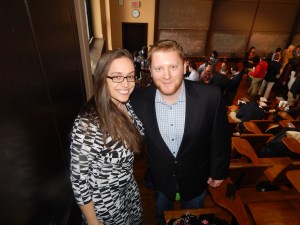 Sanders wants to impose a speculation tax on Wall Street to help create free public higher education and a single-payer healthcare system. That’s a winning message with a majority of this group. The senator’s surrogate at the event, future gubernatorial candidate Assemblyman John Wisniewski (D-19), laid out the argument in energetic, lawyerly fashion.

Clinton has spent a chunk of her career in public life chipping away at the country’s healthcare crisis: starting as first lady in the early 1990s with a single-payer focus, losing, then settling for her husband’s advancement of the State Children’s Insurance Plan; running for president, losing, then folding into the Obama Administration’s Affordable Care Act.

While laudable, Sanders insists, voters shouldn’t settle for such compromise, especially when considering the Wall Street underpinnings of Clinton’s campaign and the fact that she accepted nearly $700,000 in speaking fees from Goldman Sachs.

At the heart of the ongoing competition between Sanders and Clinton for the Democratic presidential nomination lies a stark contrast, as Clinton champions incrementalism while Sanders calls for revolution.

On Saturday afternoon, Wisniewski harped on that divergence to great effect with the young crowd.

There were laughs in the lecture hall.

“You have to dream big to get anywhere,” Wisniewski said.  “We are enormously blessed to have the Affordable Care Act, which insured 17 million more people than in the past, but the fact is 29 million people are uninsured or underinsured. We spend one and a quarter trillion dollars annually for healthcare – the most by far of any country in the world. We’re paying the most and not getting the results.”

While Clinton cozies up to Wall Street, the logic of the Sanders campaign runs, their candidate wants to force Wall Street to pay what it owes to the American people. “In 2008, Wall Street crashed and took most of the economy down with it,” Wisniewski said. “They were trading and investing with other people’s money.”

Ordinary Americans bailed out too big to fail banks and now those banks are bigger than they were seven years ago as college students eat bigger portions of debt. “The solution is free tuition for public college and university – pay for it with a tax on the reckless speculation on Wall Street,” Wisniewski said.

As for the argument by the self-professed more grounded Clinton allies that she is the pragmatist in this presidential primary, the assemblyman noted that Sanders trounced her in New Hampshire last week by 22 points.

“He’s already won,” said Wiz, obviously enjoying his role as most popular man in the room with a heartily applauding crowd.

His foil on Saturday was Kelly Stewart Maer, treasurer of the New Jersey Democratic State Committee and a longtime organizer and political operative going back to her childhood when her father served in the state legislature and to the 1990s, when she worked for former Speaker Joe Doria. 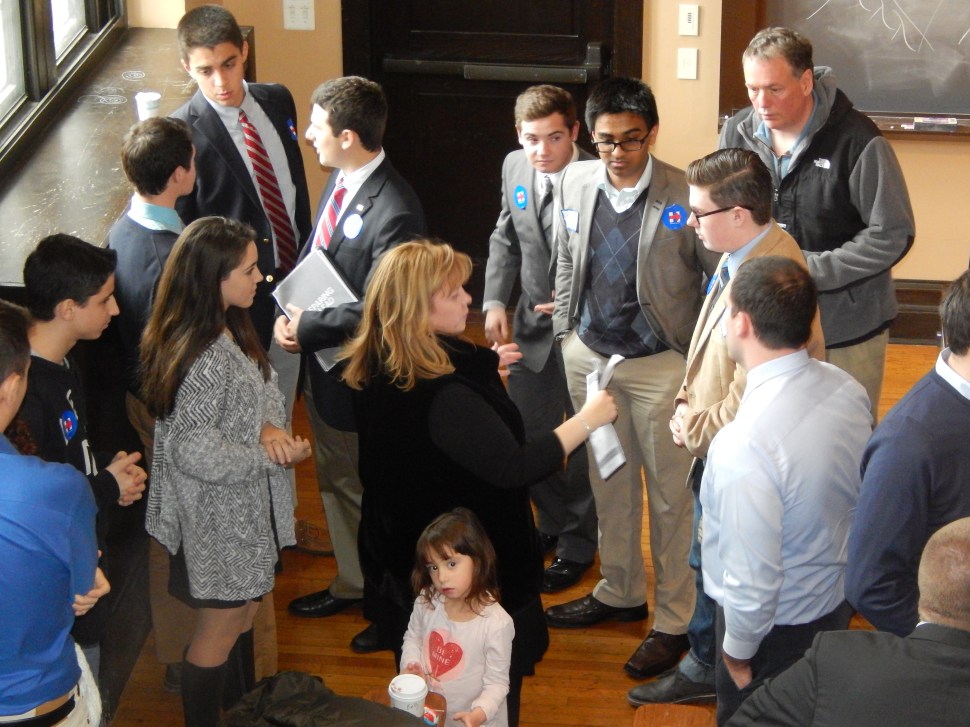 The crowd around Stewart Maer.

“I’m not here to talk about Bill,” she said.

Wisniewski, waiting in the wings with a brace of Trenton types, pounced.

Stewart Maer did note that her interest in Hillary Clinton goes back to Hillary Clinton’s work in New Jersey on behalf of her husband, who was trying to wrest battleground New Jersey away from then Republican Gov. George Bush in the 1992 presidential contest.

“I remember being in a room with her and hearing her passion and her history and I was blown away,” recalled Stewart Maer of her first encounter with Clinton, when she offered to work for free for the campaign.

Despite the fact that Bush campaigned in Madison with former Governor Tom Kean on the eve of the election, Bill Clinton won New Jersey that year on his way to winning nationally. 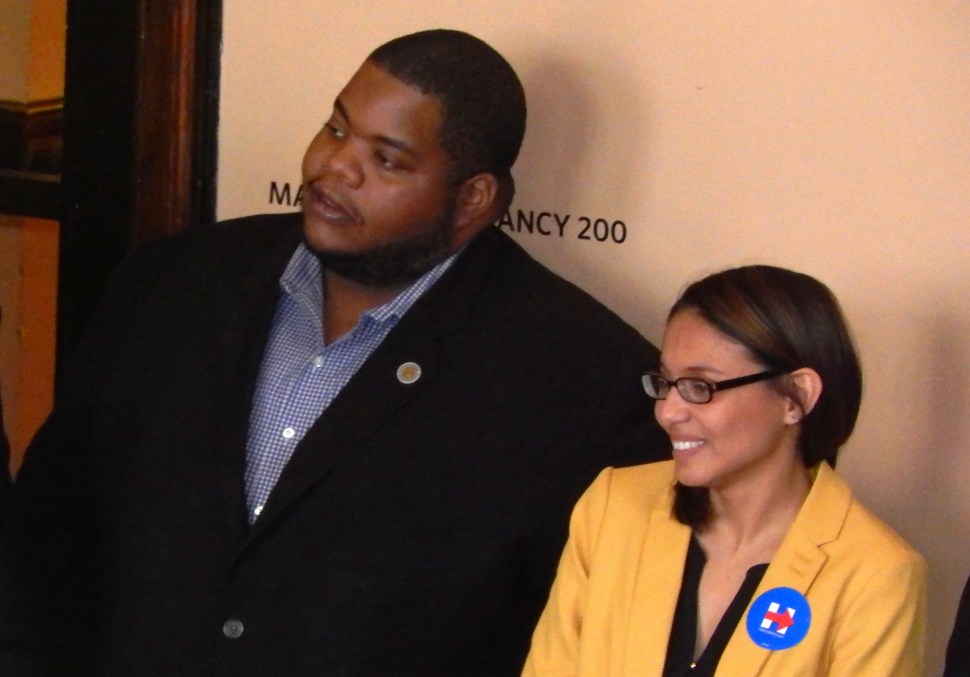 IN ATTENDANCE: Chris James of the Democratic State Committee and Assemblywoman Gabriela Mosquera of South Jersey.

A team player for the party, Stewart Maer doesn’t dislike Sanders. But she worries about a candidate whom she argues appears overly focused on his own presidential ambitions even if he conceivably negatively impacts other Democrats.

“’We’re not concerned with down ballot issues.’” That’s what Stewart Maer said the answer was from the Sanders Campaign when she pressed them on the senator’s possible down ballot impact.

That’s what clinched Clinton for the state party treasurer, she said. Her real world equation includes careful consideration of others running in the general, not just a vanguard presidential candidate. 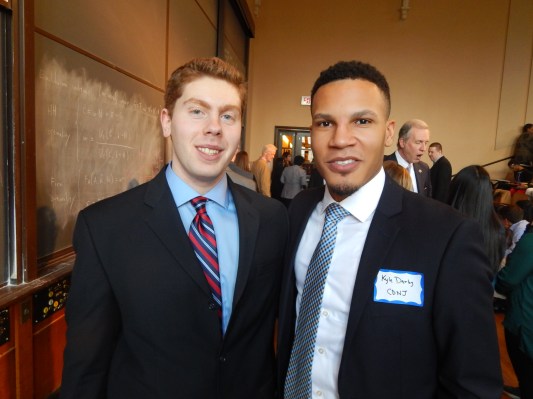 On the ground in New Hampshire last week when Sanders ran over Clinton, Stewart Maer insisted nonetheless that the work inspired her. She said she saw the enthusiasm from volunteers belonging to the same organizations in attendance at the conference.

“It was a proud mama bear moment for me,” she said of New Hampshire. “I sucked it up and came back the next day.”

The relationships and contacts sustained and sustain her, she said, pressing an argument that arises frequently in the Clinton camp. The former president and his presidential candidate spouse built a national political infrastructure and kept it good, the work and goodwill they poured into a place like New Jersey still alive and relevant, she said.

Those relationships will translate into a successful South Carolina, runs the campaign logic, where Clinton has an African American icon like Congressman John Lewis on GOTV duty, leaving Sanders to engage his bedrock: millennial voters.

Here, by the looks of it, Stewart Maer’s passion for the insider game transfers to the leadership of the youth party organizations.  But Sanders still has the reach into rank and file members.

At the finale of their respective presentations, Wisniewski stood on one side of the room and Stewart Maer on the other and Marshall Spevak urged the crowd to break in the direction of its favorite candidate.

They swamped a delighted Wiz nearly 2-1. 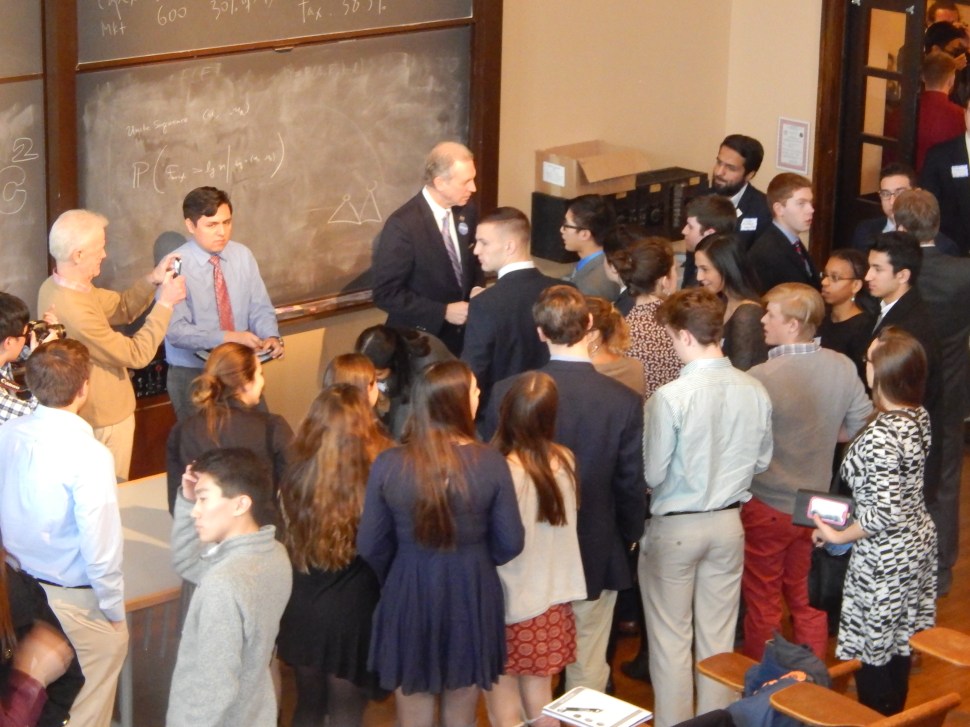 One person present didn’t break for either side.

Fashioned by last year’s LD16 dogfight, which he won by fewer than 80 votes, newly elected Assemblyman Andrew Zwicker, a plasma physicist by trade, stayed out of the fray.

“So glad the Dems have two outstanding candidates,” Zwicker told PolitickerNJ. “Looks like there is a good chance the New Jersey Primary will be relevant and I will continue to watch and read and learn about both and make up my mind later this year.”

For the moment, on the week that scientists proved a portion of Einstein’s Theory of Relativity,  the physicist-lawmaker  – the first from his profession elected to the Assembly – seemed more fascinated by Einstein’s E=MC2, which someone had scrawled on the blackboard.

“We should use evidence to make decisions about public policy,” he said.”100 percent facts, zero percent emotion.”

A hand shot up in the lecture hall.

If that’s his view, then why, by God, did Zwicker get into politics?

“My mom and dad were in politics in local council races, and as a kid I volunteered in Englewood, New Jersey,” he said with a grin. 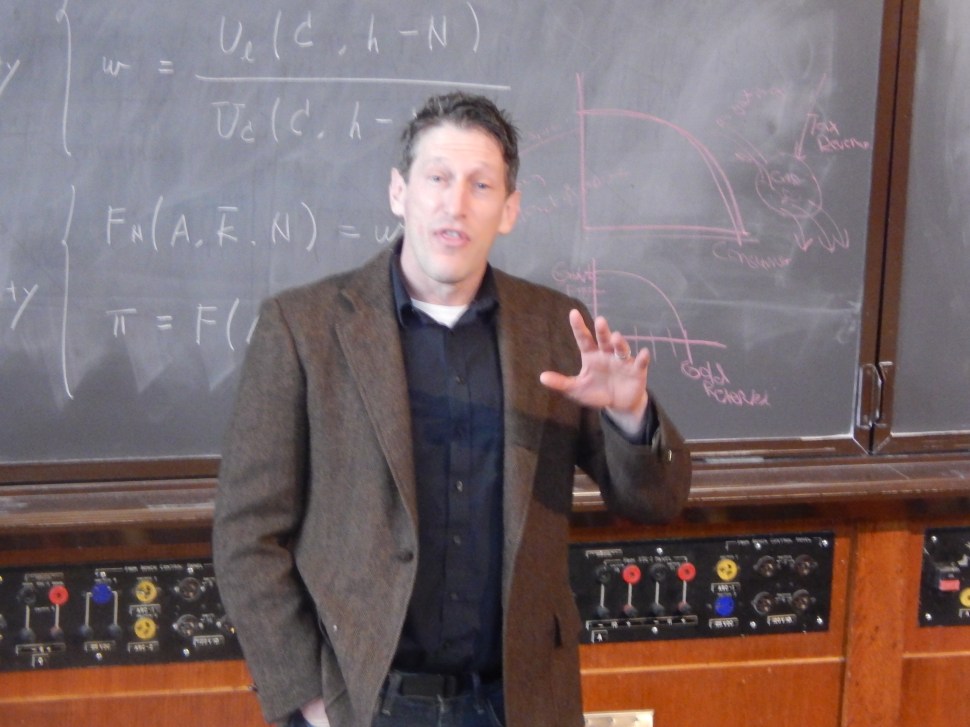 Physicist-Assemblyman Andrew Zwicker comfortably at home in the lecture hall once used by Albert Einstein. 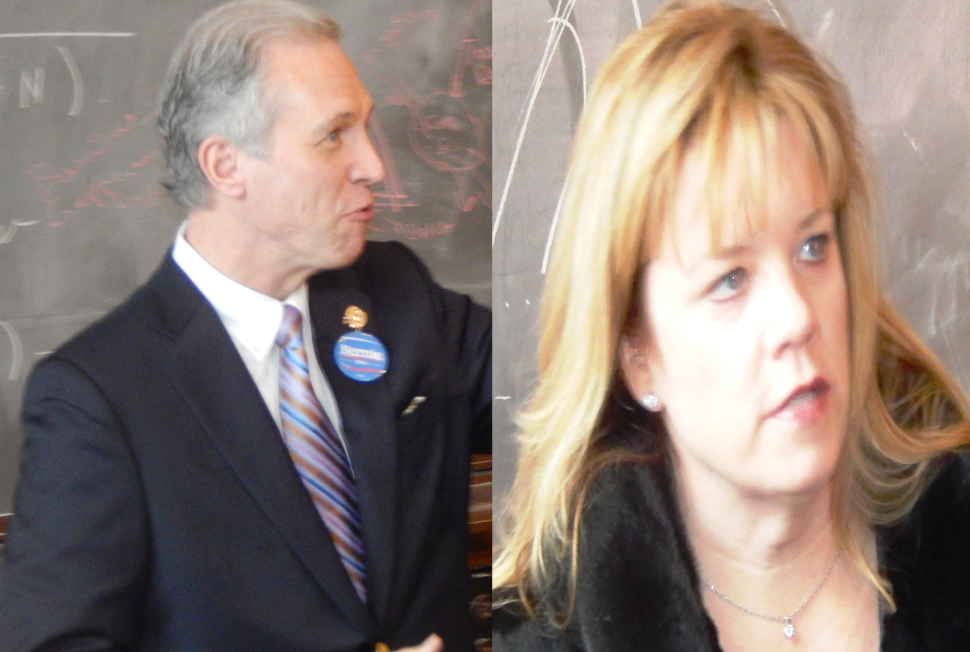