I’m just back from the TED conference in Vancouver, where thinkers and doers congregate annually to share Big Ideas and, not coincidentally, feed the mighty TED media machine.

Given how ubiquitous TED talks have become, and how accessible—via YouTube, PBS, NPR and myriad other means—it seems almost quaint to sit in a darkened room with 1,200 or so others to watch them in person. But being there has its advantages, not only in being able to share the experience with others in real time, but for the serendipity of the event itself.

Demonstrations of new technology are that much more impressive when you see them unfold before you. Things go wrong that you never see in the online versions of the talks, which are edited before they’re posted. And once in a while you encounter the weirdly unexpected. Hey, was that Monica Lewinsky who just walked past? And that guy on stage doing the countdown for Amanda Palmer’s performance of “Space Oddity”—that isn’t Al Gore, is it?

This year’s conference, whose theme was the appropriately aspirational “Dream,” featured all the ingredients that make TED both delightful and maddening. Speakers ranged from Linus Torvalds, the father of open-source software—who portrayed himself as fundamentally antisocial and admitted, “I did not start Linux as a collaborative project”—to New Yorker copy editor and “comma queen” Mary Norris.

There was the usual quotient of humblebrag—I’m looking at you, Shonda Rhimes—and speakers looking to recast themselves as big thinkers. In the latter category was Uber CEO Travis Kalanick, who tried, not very convincingly, to shed his bare-knuckle image in a talk about how his company could turn America’s cities into urban oases if not for those damn regulators.

It’s no secret we’re in something of a fallow period for life-altering personal-technology products. It’s been nine years since the iPhone’s launch redefined how we communicate and compute. Tablets, after a fast start, plateaued in terms of use and, perhaps more important, usefulness. Would-be game changers have either fizzled out or flopped spectacularly. Google Glass, anyone?

But if TED is any indication, we seem to be on the verge of something big in the related fields of augmented reality and virtual reality. AR, for the uninitiated, means layering images and additional data on top of your surroundings; VR creates an artificial world around you that you can interact with.

Meron Gribetz, CEO of AR startup Meta, demonstrated the company’s Meta 2 headset, which consist of a vizor-like device and a set of clear goggles. Using footage shot through the Meta 2, he showed how he was able to hold, manipulate and even pull apart a human brain and a model car. When he took a phone call from a colleague, the colleague appeared before him like a ghostly hologram. Think Apple’s FaceTime, but in three dimensions and without a screen.

Mr. Gribetz’s talk took some of the edge off Microsoft’s presentation, a day later, of its much-touted HoloLens technology. Project leader Alex Kipman repeated the trick of dialing up a holographic person visible only to someone wearing the device, and his presentation suffered from laggy video. But he also demonstrated the enormous possibilities when he “teleported” a NASA scientist stationed across the street into a virtual Mars-scape created on the TED stage.

The TED swag bag is legendary among conference-goers, the geek equivalent of those gift baskets the Oscars lavish on Hollywood stars. Past TED giveaways have included such items as Google Nexus phones, Radio Flyer scooters and a special TED edition of Microsoft’s ill-fated Zune player.

This year’s bag, in contrast, was relatively prosaic. Gadgets included a pair of Google Chromecast Audio devices, for connecting speakers to the Internet and each other; an XY “smart beacon,” for affixing to frequently misplaced items, allowing you to find them via smartphone app; an LED lightbulb that’s supposed to help you sleep better; and a universal phone-charging cable.

In addition, attendees could pick one from a selection of gadgets. By the time I got there, the Muse brain-sensing “meditation made easy” headband was already gone, as was the heart-rate wristband and the video doorbell camera.

There was also an Internet-connected garage-door sensor (believe it or not, I’ve already got one of those), a Petnet Internet-enabled automatic animal feeder (we tend to feed the dog the old-fashioned way) and a wireless charger (alas, not compatible with my phone). I finally settled on the Pencil, a stylus from FiftyThree.com that allows you to write or draw on an iPad using an app called Paper.

Drone technology continues to evolve at a rapid clip. Autonomous-systems expert Raffaello D’Andrea of the Swiss Federal Institute of Technology showed off a variety of self-piloting drones capable of sensing the physical environment around themselves and adjusting their actions accordingly.

Most impressive was his demonstration of what he called “synthetic swarms”—in this case, small, lightweight flying machines kitted out with technology allowing them to sense the presence of, and coordinate with, their fellow drones. The drones spun through the darkened theater like a firefly ballet, rising, falling and swirling.

You can get a flavor of the demonstration from watching Mr. D’Andrea’s talk, which is already online. But believe me—you really had to be there. 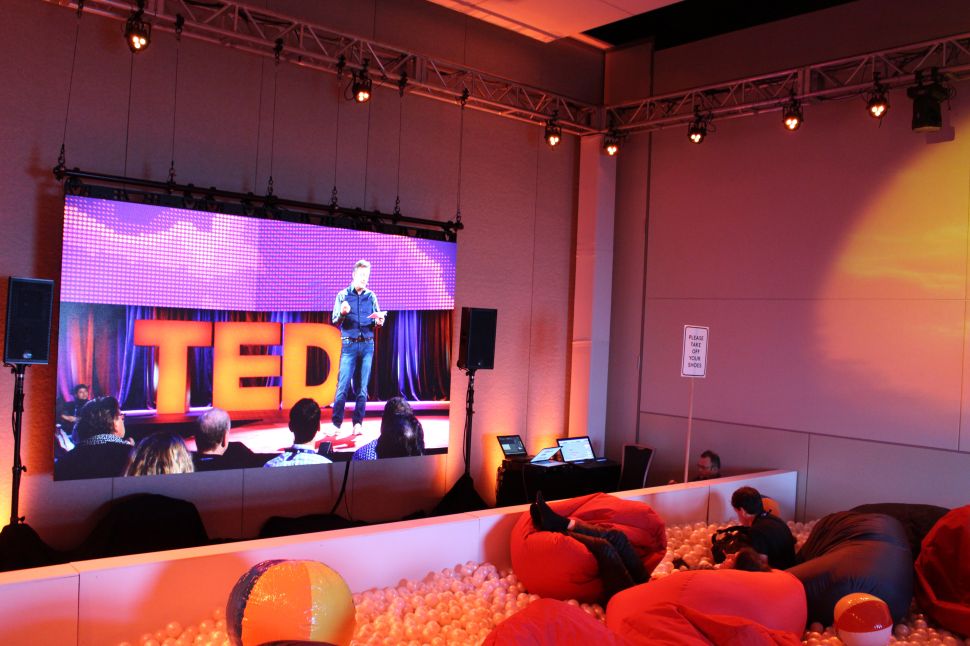