COLUMBIA, S.C.—South Carolina, a state with a large number of evangelicals and hardline conservatives, was supposed to be very kind to Sen. Ted Cruz of Texas.

Mr. Cruz looked like he could defy polling once again and race past Donald Trump, the real estate billionaire who isn’t much of a churchgoer, and pull of an upset. Instead, he found himself in a dead heat with Sen. Marco Rubio, a Floridian he derides as a false conservative, while Mr. Trump ran away with another state.

Where does this leave the self-described courageous conservative?

It’s far too soon to start writing Mr. Cruz off after he failed to significantly outperform Mr. Rubio or Mr. Trump in a state tailored to his strengths. On March 1, a slew of Southern states will vote, and the Texan’s unvarnished, unapologetic conservatism will probably sell well there, at the minimum.

Beyond that, the very initial knock on Mr. Cruz’s candidacy, the one leveled against him way back when he kicked off at Liberty University last March, may start coming to pass: he’s too right-wing to grow his support and ultimately capture the nomination. As Nate Silver, the statistician and founder of FiveThirtyEight, pointed out tonight, Betfair, the Internet’s largest betting market, still gives Mr. Cruz far lower odds of winning than Mr. Trump or Mr. Rubio. How can Mr. Cruz go on this Southern run if he can’t knock out a New York billionaire and a Floridian in South Carolina?

Mr. Cruz, speaking at his victory party here in a ballroom room tucked into the South Carolina State Fairgrounds, was plenty bullish. He said he was the best candidate to defeat Mr. Trump, fell the Democratic nominee and bring a battling brand of conservatism to the White House.

“In Iowa, they said it couldn’t be done, and we won. In New Hampshire, they said a conservative, a bible-believing Christian, could not compete and we defied expectations,” Mr. Cruz said. “And tonight, despite millions and millions of dollars of false and nasty attacks, despite the entirety of the political establishment coming together against us, South Carolina has given us another remarkable result.”

As the primary calendar moves deeper into March, Mr. Cruz may have to get more creative. Mr. Trump has shown he can draw from wide swaths of the Republican electorate, appealing to the hard right and non-doctrinaire conservatives alike. Mr. Cruz has not proved this, not in any of the first three states that voted.

How will he win delegate-rich, winner-take-all states like Ohio and Florida? He may find a way, and defy expectations as he has before. Or fail miserably. Anything’s possible.

His supporters tried to remain hopeful. Some couldn’t believe Mr. Trump had zoomed to victory so quickly. Others lamented Republicans were being bamboozled by a candidate who was pro-choice not too long ago, and has no problem defending entitlements.

“You talk about someone like Trump, today he’s all about conservatism, less than five years ago that man would be described as a Democrat,” said John Acton, a database manager from Houston who traveled here to volunteer for Mr. Cruz. “He holds a lot of the same positions as Bernie Sanders.”

“Donald Trump plays into a lot of hype,” said John Duggar, a district manager for an inventory company from Columbia. “I think there’s a lot of uninformed voters out there that get bits and pieces in snippets and get their political news from Facebook.”

Mr. Trump has done more than play into the hype. He has proven he can win in two very different states, and back up his bombast.

Mr. Cruz, though, has to believe he can be the man to finally humble the Donald.

“We are the only campaign that has beaten and can beat Donald Trump,” he said. “That’s why Donald relentlessly attacks us and ignores all the other candidates.” 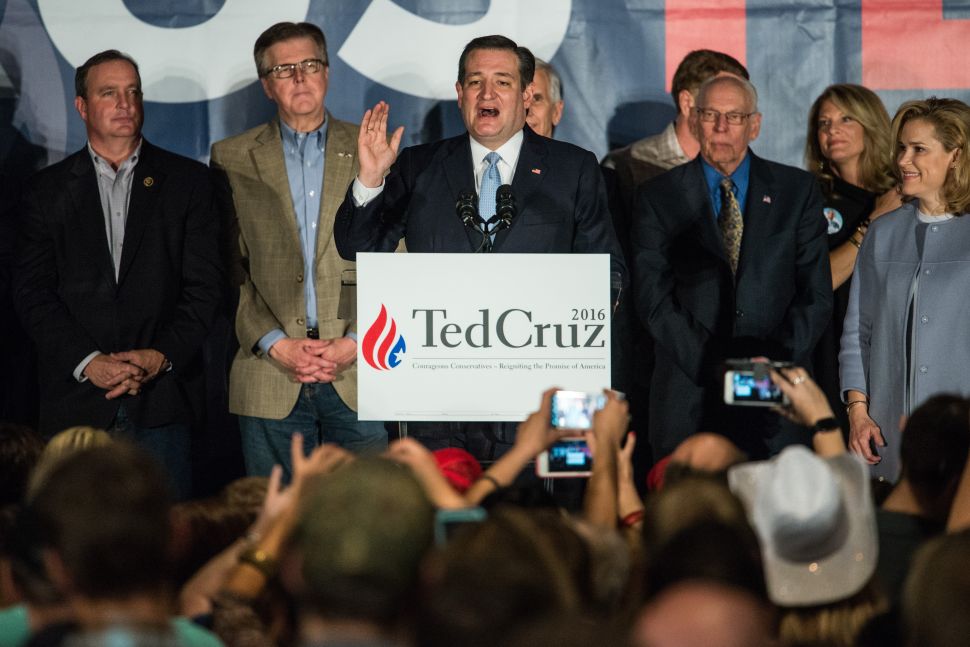