We have only two GOP debates left! We started with two debates each night to accommodate 17 candidates, and now we only have to endure one debate with five candidates, two of whom are irrelevant at this point.

There was a question prior to the debate about whether Sen. Marco Rubio and Ted Cruz would attack each other or businessman Donald Trump. The two launched a couple attacks against each other, but directed most of their efforts toward Mr. Trump. This was a smart move for each, but their attacks mostly fell flat.

Still, they got some good hits, as did Mr. Trump.

Where he floundered: Mr. Trump’s gratuitous attack on radio host Hugh Hewitt was unnecessary. Mr. Hewitt is a popular and influential GOP pundit, there was no reason for Mr. Trump to insult him and claim he had few listeners.

Mr. Trump didn’t flounder anywhere else. Both Mr. Rubio and Mr. Cruz directed numerous attacks toward him, and Mr. Trump was able to deflect the attacks quite easily.

Mr. Trump was also the only candidate to suggest eliminating the Education Department and Common Core, two things not being discussed at length in the GOP.

“We’re going to make many cuts in business. We’re getting rid of—we’re going to get rid of—so many different things. Department of Education, Common Core is out. We’re going local. Have to go local,” Mr. Trump said. “Environmental protection—we waste all of this money. We’re going to bring that back to the states.”

Where he floundered: Mr. Cruz tried numerous times to bring down Mr. Trump, but his attacks are unlikely to stick. Mr. Trump was able to shake off the claims with a snappy response or by ignoring the specific attacks and spouting generalities, as he did with health care.

When Mr. Cruz, and Mr. Rubio, tried to point out that Mr. Trump didn’t have a real plan to replace Obamacare, Mr. Trump was able to continually claim he would let Americans purchase insurance across state lines, and the audience cheered each time. The fact of the matter is that Mr. Trump’s supporters aren’t going to hear anything at this point that is going to make them think twice about their candidate, and unless Mr. Cruz or Mr. Rubio could figure out how to do that, their attacks won’t matter.

Where he excelled: Mr. Cruz was more effective in going after Mr. Trump on hiring illegal immigrants. He was able to direct most of his attacks toward Mr. Trump but still got a knock in against Mr. Rubio for supporting the Gang of Eight bill.

“I really find it amazing that Donald believes that he is the one who discovered the issue of illegal immigration. I can tell you, when I ran for Senate here in the state of Texas, I ran promising to lead the fight against amnesty, promising to fight to build a wall,” Mr. Cruz said. “And in 2013, when I was fighting against the ‘Gang of Eight’ amnesty bill, where was Donald? He was firing Dennis Rodman on ‘Celebrity Apprentice.’”

Mr. Cruz gave an impassioned answer about nominating a principled constitutionalist. He was able to push back against Mr. Trump’s claim that the New York businessman would nominate a constitutionalist by pointing out that Mr. Trump has donated to leftist politicians.

“You know, it’s interesting now that Donald promises that he will appoint justices who will defend religious liberty, but this is a man who, for 40 years, has given money to Jimmy Carter, to Joe Biden, to Hillary Clinton, to Chuck Schumer, to Harry Reid,” Mr. Cruz said. “Nobody who supports far-left liberal Democrats who are fighting for judicial activists can possibly care about having principled constitutionalists on the court.”

Perhaps Mr. Cruz’s best line of the night was his explanation about how Mr. Trump couldn’t defeat former Secretary of State Hillary Clinton by pointing out the former businessman’s donations to the Clintons.

“The next Republican nominee needs to be able to make that case against Hillary. And if Donald tried to did it, Hillary would turn to Donald and say, ‘but gosh, Donald, you gave $100,000 to the Clinton foundation. I even went to your wedding,’” Mr. Cruz said. “He can’t prosecute the case against Hillary, and we can’t risk another four years of these failed Obama policies by nominating someone who loses to Hillary Clinton in November.”

Where he floundered: He made several attempts to go after Mr. Trump, but unfortunately for Mr. Rubio—who really needs to take a bite out of the New York businessman’s lead—he was not able to land a successful attack.

Where he excelled: He got in the most zingers against Mr. Trump.

Mr. Rubio has always been good at poking fun at himself, and Thursday night he was able to poke fun at himself and his previously poor debate performance where he repeated himself, by taking that accusation to Mr. Trump.

“I see him repeat himself every night, he says five things: everyone’s dumb; he’s gonna make America great again; we’re going to win, win win; he’s winning in the polls; and the lines around the state,” Mr. Rubio said.

Mr. Rubio also provided one of the best defenses of Israel that any candidate has given this cycle, standing firmly on the side of the country against Palestine.

“And so the next president of the United States needs to be someone like me who will stand firmly on the side of Israel. I’m not—I’m not going to sit here and say, ‘Oh, I’m not on either side,’” Mr. Rubio said. “I will be on a side. I will be on Israel’s side every single day because they are the only pro-American, free enterprise democracy in the entire Middle East.”

Where he floundered: Mr. Kasich has maybe one or two states where he has a chance to win a primary. That is not a path to overall victory, so at this point he’s just taking votes away from the eventual nominee and wasting time during the debates. It doesn’t matter what he says.

Where he excelled: He didn’t excel. It’s time for him to drop out.

Where he floundered: The only thing that would be able to save Mr. Carson’s campaign would be a stellar debate performance. He didn’t deliver. He had some decent lines, sure, but he didn’t say anything memorable (except that “fruit salad of life” nonsense) and is utterly forgettable at this point.

Where he excelled: Mr. Carson’s opening was the most coherent thing he’s said this entire election cycle. He pointed out to the other candidates that they will get nowhere attacking each other and should instead focus on solutions.

“Marco, Donald, Ted, John, we will not solve any of these problems by trying to destroy each other,” Mr. Carson said. “What we need to do is be looking for solutions tonight. It’s not about us, it’s about the American people.”

Good on Mr. Carson. It’s too late for him though. 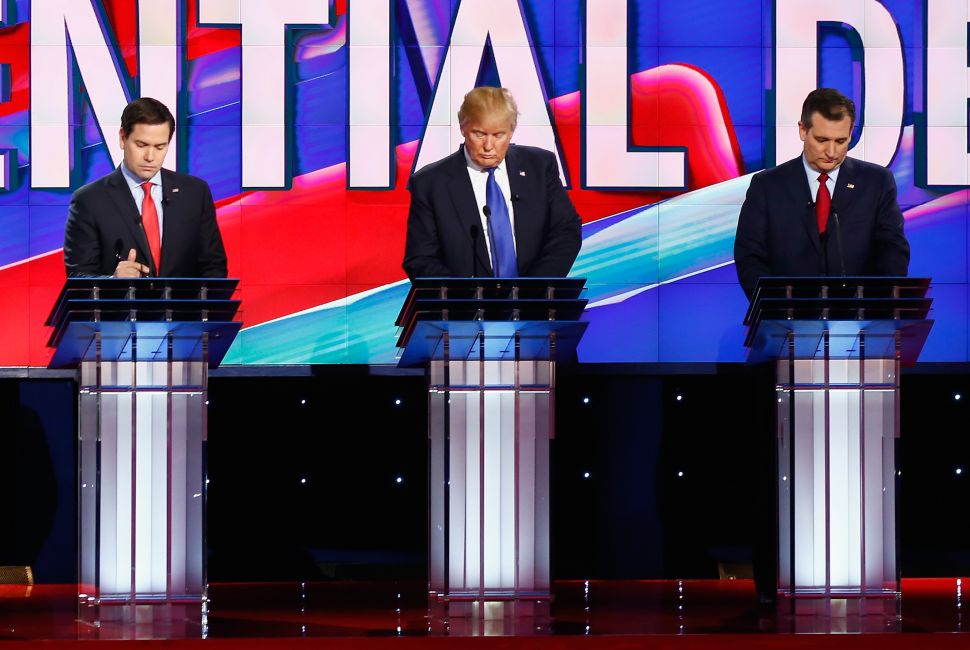