In what has already been an incredibly tough year in hero loss, 2016 claimed yet another music legend on February 4, when we lost legendary soul musician and Earth Wind & Fire founder Maurice White following his long and valiant battle with Parkinson’s disease. He was 74.

EWF were the very first African-American music group I was exposed to as a child of the 1970s, given their omnipresence on network television at the time with appearances on awards shows, Solid Gold, Bob Hope specials and their cameo in the otherwise un-watchable 1978 box office bomb Sgt. Pepper’s Lonely Hearts Club Band. However, Mr. White’s roots in my sonic education are much deeper than cursory exposure on my old TV screen as a youth. The deeper I got into music, the more I realized just how broad of a net the Chicago native cast on the pop music landscape. Below are some of my favorite moments from deep into the catalog of Maurice White’s outstanding oeuvre.

Besides the gorgeous lady on the album jacket and a Grammy-winning song in “Hold It Right There,” 1966’s Wade In The is a highlight from White’s original tenure as drummer for Ramsey Lewis’ classic ’60s trio, further propelled by a swinging cover of The Beatles’ “Day Tripper,” a song not even six months old at the time they recorded it.

Between his time in the Ramsey Lewis Trio and forming Earth Wind & Fire, White did a brief stint performing with the South Side instrumental funk group The Pharoahs, whose sole studio album, 1972’s The Awakening, is a bona fide deep crate classic and highlighted by this massive 13-and-a-half minute hard funk instrumental workout.

Long before they became a commodity on the Billboard charts, the early incarnation of EWF was an adventurous and experimental funk outfit in the vein of early Funkadelic, highlighted by this confrontational opening cut from their 1971 album The Need of Love, which somehow finds a perfect balance between Sun Ra and Sly Stone.

If ever there was a film more deserving of the Criterion Collection treatment, it’s Melvin Van Peebles’ Blaxploitation classic Sweet Sweetback’s Baadasssss Song, where the legendary director/actor/musician received help on the soundtrack from a very young incarnation of EWF. This particular tune is most definitely the highlight for anyone who was obsessed with the bug-eyed variation of the song Madlib conspired for the very first Quasimoto album, The Unseen.

When Lewis wanted to take a funkier turn in the 1970s, the piano man reached out to his old drummer to play on a trio of LPs for Columbia Records, which have been serious favorites for crate diggers and beatmakers for at least two generations now. The best of which being 1974’s Sun Goddess, whose title track features White’s fellow members of EWF for one of the illest jazz-funk throwdowns to ever go down!

The only other thing that augmented the indelible groove of one of the 1970s’ hottest disco jams was how well it was utilized in the opening scene of Boogie Nights, shot in one take on a steady cam, especially when accompanying a never-sexier Heather Graham roller skating around to it.

Michael Schultz’s “jukebox musical” loosely based on the 1967 Beatles concept album is without question one of the worst movies in the history of celluloid. And with the sole exception of casting George Burns as Mr. Kite, the only other salvageable thing about the film is this brassy version of “Got To Get You Into My Life” that EWF contributed to its soundtrack, which was produced by famed Fab Four studio man George Martin.

EWF might have sat out of the majority of the mid-’80s following the release of their synth-heavy 1983 LP Electric Universe, but White himself stayed supremely busy, producing albums for the likes of Barbara Streisand, Neil Diamond and Atlantic Starr as well as a bunch of soundtrack work. He also found time to deliver his auspicious solo debut, a sweet slice of ’85 R&B highlighted by this distinct rendition of Ben E. King’s career-defining hit.

The biggest sin of ’80s comedy was that John Candy and Eugene Levy didn’t get to do more movies together. But 1986’s Armed and Dangerous ranks up there with the best screen time the Canadian comedy greats go to spend in one another’s company, with Levy playing a bumbling defense attorney trying to assist Candy’s framed cop from going to prison for a crime he didn’t commit. White oversaw the production for the film’s soundtrack, highlighted by this should’ve been hit from disco diva Cheryl Lynn, the voice behind one of disco’s signature tunes, “Got To Be Real.” This song is so ’80s it should come with an Ocean Pacific T-shirt.

Another classic ’80s soundtrack White had a major part in was for Eddie Murphy’s 1988 comedic masterpiece Coming to America, which featured this irresistibly funky single from the youngest brother of the renowned Detroit soul family DeBarge. It’s too bad White didn’t produce Chico’s 1988 solo album Kiss Serious, and “All Dressed Up” is the reason why.

“This is what you call history right here,” proclaims the man they called Big Baby Jesus on the Wyclef Jean-produced lead single to the second album from the vastly underrated Wu-Tang Clan affiliate act Sunz of Man, which featured EWF on the hook. Here’s hoping ODB was among the first to greet Maurice in heaven with open arms.

That moment in the beloved children’s film Happy Feet when Mumble and Gloria finally achieve the simpatico chemistry they’ve been seeking their whole lives together to the explosive tune of EWF’s chart burner “Boogie Wonderland.” What makes this version of the song even more interesting was how wonderful the late Brittany Murphy was singing lead on the song, showcasing a raw talent that would have really been quite something to see evolve had she stayed with us a little longer. 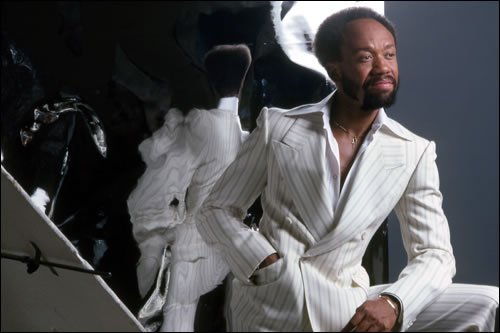