Another boring and cliché-riddled bid to join the young adult market already overpopulated by X-Men, Hunger Games, Twilight vampires and interminable hordes of rampaging zombies, The 5th Wave is a typical example of the kind of dopey junk that passes for literature among today’s unsophisticated teens, who know everything about J. K. Rowling and nothing at all about Jane Austen. They must write book reports from Classics Illustrated comics.

Based on a trilogy of preposterous YA novels by fantasy writer Rick Yancey, The 5th Wave has mediocre direction by somebody called J Blakeson, a few good special effects worth seeing but not discussing in any kind of meaningful detail and a monotonous script by three human word processors who should remain nameless (although one of them, Susannah Grant, wrote Erin Brockovich and therefore knows better). The narrative in this time-waster is both familiar and forgettable: it’s the usual routine of bad music and the challenges of the next Saturday night prom, until an alien space ship arrives, unleashing a killer virus in the form of five shock waves, the purpose of which is to destroy the human race.

The first four waves have already wiped out whole cities (great shots of empty Manhattan streets, filled with flood and going down for the count). The only survivors are teenagers clinging to cell phones and bottled whose lives are whipped into shape when they are forced into unisex boot camps to defend themselves against the alien invasion. The protagonist is a girl named Cassie (played by the talented Chlöe Grace Moretz, who already paid her dues as the star of the Carrie remake and deserves better). She already lost her parents to the virus, and now, with the fifth wave on its way, she spends the rest of the movie trying to find and save her younger brother and his teddy bear, narrating her thoughts in a corny combination of flashbacks and diary entries that evoke guffaws.

In the mess that ensues, the wasted grownups include Liev Schreiber, Maria Bello and Ron Livingston, while Cassie is joined by two potential boyfriends with bigger roles—Ben (Nick Robinson), a fearless high school classmate, and Evan (Alex Roe), a handsome alien robot who has taken the form of a human “host.” Neither of these characters exist to move the story from one point to the next, but to serve the sole purpose of reminding the viewer that there are two more 5th Wave installments on the way in which a romantic triangle will undeniably develop. Drugs, radiation, surgery—nothing works to rid the body of alien hosts once they establish squatter’s rights in the human body. They are called “others.” In the fifth wave, they will survive like cockroaches. Who will save Cassie? “You make me want to be human again,” sighs the besotted Evan.

“What’s the point of any of this?” asks Cassie. I kept hoping, but no such luck. It’s a question that is never answered. 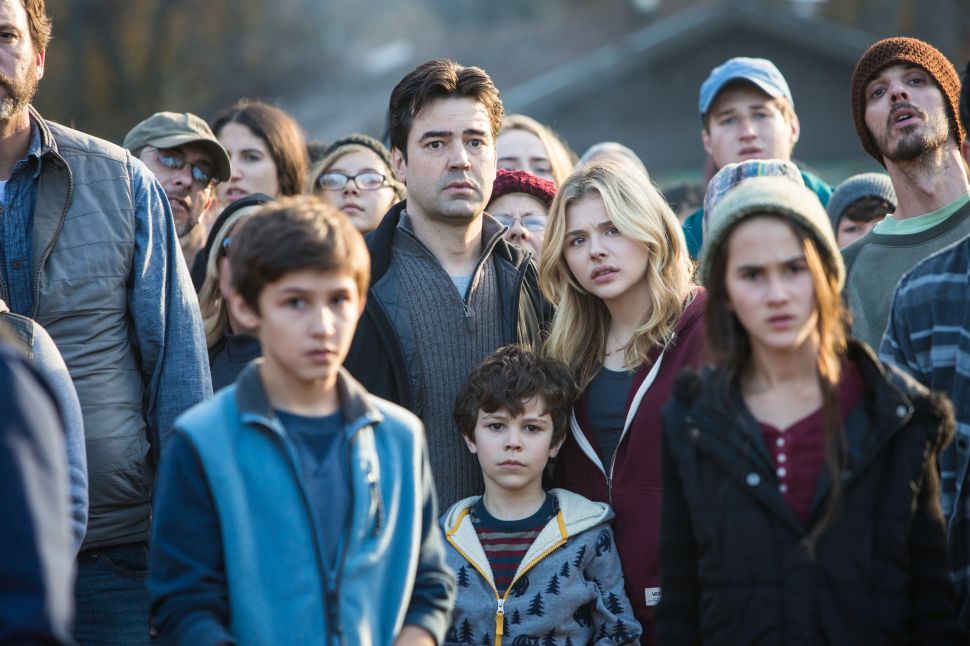