It is no secret young voters overwhelmingly support Bernie Sanders over Hillary Clinton. In Iowa and New Hampshire, over 80 percent of people ages 18 to 29 supported Mr. Sanders. In Nevada nearly eight out of ten voters in this age range supported him, and in comparison to the 2008 caucuses, young voter turnout increased in the state by five percentage points. While this demographic’s support of Mr. Sanders has been falsely attributed to the negligence and optimism of youth, the divide is in fact more representative of the Democratic Party’s failure to seriously address the issues facing young America.

In 2008, President Obama received 66 percent of the vote from young people, ages 18 to 29. In 2012, he received 60 percent of their vote. In 2014 Harvard University poll found 51 percent of voters ages 18 to 29 (identifying as definitely voting in the midterm elections) prefer a GOP-controlled Congress. Ms. Clinton’s failure to connect with this demographic is more troubling than her competition for the nomination against Mr. Sanders—it reflects a growing disconnect between the establishment of the Democratic Party and young people in general.

Rather than working to close this age gap, Ms. Clinton’s supporters—the majority of whom are over the age of 55—patronize Mr. Sanders’ supporters,  insinuating young women support him because they’re chasing after the boys. Ms Clinton’s supporters have also tried to stereotype Mr. Sanders’ supporters as Bernie Bros—boringly similar to the 2008 smear attacks on “Obama Boys.” They have insisted Ms. Clinton is the only electable Democratic candidate, despite every major poll showing Mr. Sanders outperforms Ms. Clinton in a head-to-head general election against every Republican candidate.

Mr. Sanders resonates with young people because he speaks to the issues they care about—the issues that worsened under the Clinton and Bush administrations. Since 1992, student loan debt has increased from $24 billion to $110 billion. Since 1995, average tuition rates at both private and public universities have more than doubled. In conjunction with the rising costs of higher education, unpaid internships have been popularized as the entry-level job market has shrunk, leaving most college graduates with no other option but to live at home with their parents. Millennials have yet to recover from the 2008 economic recession—even for the nearly 60 percent of them who don’t undertake massive debt to obtain a college degree. Higher education is only affordable for the very wealthy in this country, and these reasons are why millennials support Mr. Sanders’ proposal to make public college tuition free—not because millennials don’t understand how democratic socialism works.

Millennials live in a very different world than the boomer generation and, unlike their elders, haven’t been brainwashed by the decades-long media courtship of Ms. Clinton. Her experience is frequently cited as a qualifying status for the presidency, but her record contains numerous contradictions on nearly every position she has taken. This penchant for political expediency is often dismissed by other generations.

Up until 2013, Ms. Clinton did not support same sex marriage, which was overwhelmingly pushed and supported by younger voters. According to a Pew Research study, 73 percent of millennials support same sex marriage compared to 45 percent of the boomer generation. On many other issues Ms. Clinton lagged behind moving to the left with the rest of the Democratic Party until it became popular to do so.  During her failed 2008 presidential campaign she ran on a much more moderate platform. Now, as Mr. Sanders has popularized many progressive policies rarely addressed in a meaningful manner, Ms. Clinton alleges her candidacy is realistic and Mr. Sanders’ is not.

This type of campaigning works best with older generations who have greater aversions to terms like “socialism” and “radical.” Yet many of the proposals Mr. Sanders fought for in Congress have now been adopted by Ms. Clinton and are sold to her supporters as uniquely her own. The deep condescension inherent to Ms. Clinton’s campaign is glaringly obvious, and if she hopes to engage young voters to ensure a strong future for the Democratic Party, belittling the reasons they support Mr. Sanders is the wrong way to accomplish this goal.

Mr. Sanders is different from other candidates typically offered by the status quo. He is free of corporate influence and the overly-polished pretentiousness too often found in American politics. Young people are tired of political spinning. The establishment expected Hillary Clinton to sweep the Democratic presidential nomination, but her campaign does not have the focus or the attitude Americans want from their leader. Millennials want a candidate who reflects progressive change reminiscent of past presidents like John F. Kennedy Jr. and Franklin Delano Roosevelt—not one who exemplifies politics as usual, where public policy is determined by outside interests. Millennials want Bernie Sanders as their president and the rest of the Democratic Party needs to start understanding why that is, instead of attacking them for their participation. 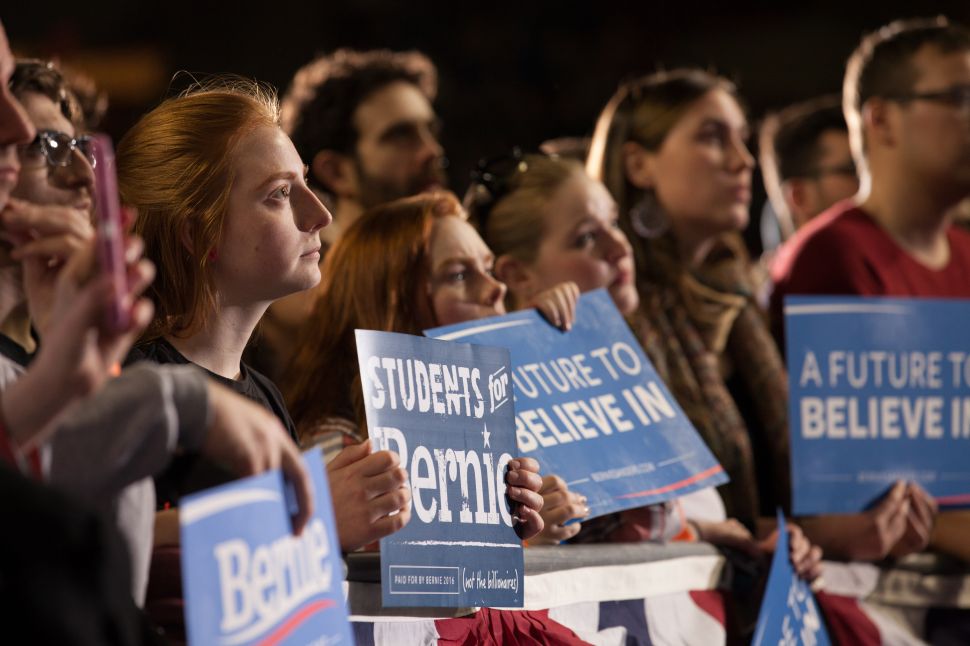