It seems like it was just yesterday that we were all losing our minds—yelling at coworkers, rage tweeting in all caps and forever tarnishing relationships with those who think “the dress” is #BlackAndBlue (It’s definitely #WhiteAndGold). Yes, in case you haven’t yet gotten the chance to realize how precious and swift time is today, it’s been exactly one year since the debate that nearly broke the Internet.

“The dress” is undoubtedly the most quintessential viral phenomenon ever. It spread further and quicker than pretty much everything we consider to be viral content and instantly sparked a global conversation. In two day’s time, there were more than 4.4 million tweets on the subject. After a week, there were 10 million, and that’s not even considering the stir it caused on Tumblr (where it started), Facebook and in the media. Twitter even officially named “the dress” as one of its most influential topics of 2015, alongside historic events like the Black Lives Matter movement and the Pluto flyby. With all of that attention, the effect this viral hit has had on science and the world in general might not sound crazy. (People who got “the dress” tattooed on them, on the other hand…)

As quickly as people argued with their loved ones over the colors, the media sought to publish explainer pieces detailing why some people saw the dress as black and blue while other saw it as white and gold. There was a lot to say about the shoddy photography job, but “the dress” actually sparked a lot of research about the differences in the ways we perceive color. As we mark the one year anniversary, it’s already been the subject of a bunch scientific peer-reviewed journal articles. And in July 2016, the Journal of Vision will publish a special issue about the dress titled “A Dress Rehearsal for Vision Science.”

Another study published in Current Biology in June also sought to explain and learn from the phenomenon. The researchers, from the Department of Psychology at Giessen University in Germany, also pointed to differences in lighting.

“We speculate that the ambiguity arises in the case of this particular image because the distribution of colors within the dress closely matches the distribution of natural daylights. This makes it more difficult to disambiguate illumination changes from those in reflectance,” reads the paper‘s abstract.

Another study, however, focused on color and came to some conclusions about blue-yellow asymmetry.

“We discovered a novel property of color perception and constancy, involving how we experience shades of blue versus yellow. We found that surfaces are much more likely to be perceived as white or gray when their color is varied along bluish directions, compared with equivalent variations along yellowish (or reddish or greenish) directions,” the authors write.

The study also addresses lighting and shading and how it relates to color, also stating, “We show that these individual differences and potential lighting interpretations also depend on the special ambiguity of blue, for simply reversing the image colors causes almost all observers to report the lighter stripes as yellowish.”

Stay tuned for more #TheDress studies. The Internet may be over this, but science isn’t. 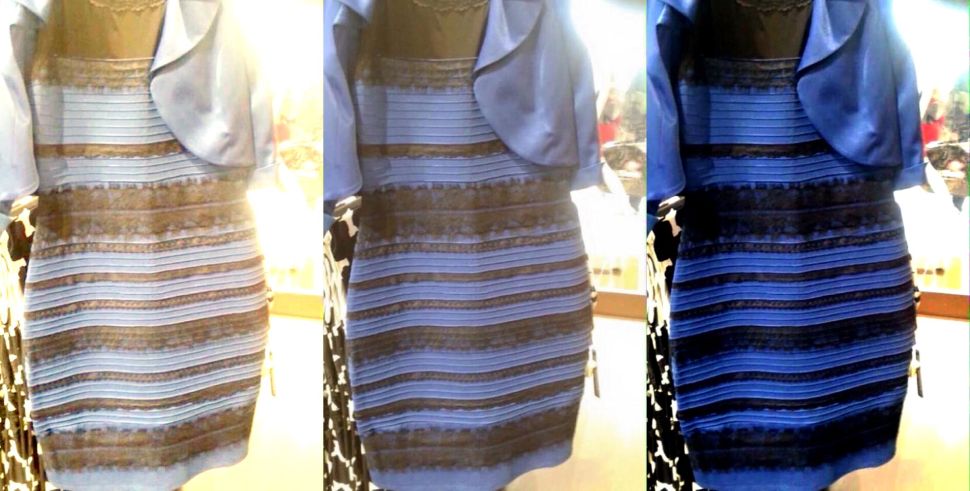