This episode was far funnier than any show about depression, magic, addiction, and existential dread has any right to be. The Magicians has come into its own as an entity distinct from the book and enjoyable in its own right, cleverly written, with characters I’d be happy to watch just hanging out, sit-com style, without even touching on the impending Plot-with-a-capital-P of having to save the magical world and fake Narnia.
This was the first episode that I watched with a friend, someone, bribed with a bottle of wine, who had never read the books, and hadn’t seen the first two hours of the show. There was a chance then, that by the end I would feel apologetic for forcing her to sit through 40-plus minutes of a subpar show I needed to watch for work. But with the confidence of sleight of hand magician, The Magicians pulled through, opening with a slick montage sequence juxtaposing the Brakebills crowd and Julia growing her skills as a hedgewitch while infectious music from The xx played.

Some of the imagery is a little heavy-handed. There are moments where, I imagine, a screenwriting professor might have used a red pen to write some notes in the margin. “Does the professor really need to talk about ‘being consumed by magic’ at the beginning of the episode where we learn about niffins – the magical creature that happens when students are consumed by magic?” one note might read. “Do Alice and Quentin really need to sit under a poster with the text ‘Do spirits come back?’ when they’re talking about bringing her dead brother’s spirit back? A little heavy handed.” Heavy handed would be underlined a few times.

But for its straightforward character signaling (the slimy Murray Hill-looking hedgewitch teacher is smoking so we know he’s slimy! Alice is still in Peter Pan collars and glasses so we know she’s nerdy! She takes them off when she’s drunk so we know she loosened up!) episode 3 continues the trend of building Eliot and Penny into dynamic and interesting foils for Quentin’s sad puppy dog as he’s inexplicably forced to still be the center of the story. Quentin is boring, through no fault of the wonderful actor Jason Ralph – Lev Grossman’s series wrote its protagonist as an objectively bad person, a selfish, depressed navel-gazer, and it’s to the credit of the SyFy that they’ve recognized how much more fun the show is when they turn it into an ensemble cast.

The second party watching the episode with me confirmed my conclusion that every single actor is incredibly attractive. “10/10, would bang,” we nodded to each other as anybody entered the frame. It’s like the best CW show when you can drool over every member of the cast, from the genius bad-boy with a scarf game like no one else, Penny (played by Arjun Gupta, who I have been informed is actually not wearing guyliner) to the tall, side-burned lush in Hale Appleman’s Eliot, (who is wearing guyliner) who seems like exactly the type of man you’d love to get drunk with in 1940’s Paris.

In another trick that comes across like magic (last magic metaphor, I promise), SyFy brings it from funny to genuinely scary back to funny without stopping for air. A clammy hand reaches out from the depths of a bottomless fountain… and then gives our characters the middle finger behind their backs.  This is a show in which Alice’s brother can return in the form of a terrifying blue demon, and Penny can read Quentin’s mind and discover that he’s singing Taylor Swift in his head and neither seems out of place.

The last hurdle the show needs to overcome is establishing a consistent visual tone: the first Harry Potter movie gave us a sweeping view of the entire castle as Harry approached on a boat; we have yet to see one version of Brakebills Academy that offers a tangible aesthetic. Part of this is the fault of the production schedule: the pilot was filmed in New Orleans while the rest of the season was shot in Canada. But it still seems as though the production designers can’t make up their mind as to whether Brakebills is an Ivy League analog or medieval castle. In the case of the Physical kid’s house, the marquis lights and posters make it look like a hipster bar in Bushwick.

Things happen in this episode – for some reason Quentin and Eliot need to hunt down a book that fell into the hands of the hedgewitches, and Margot and Alice track down a former student who knew what happened to Alice’s brother – but what lingered was the sense of fun and confidence the show is gathering. Any television series that will show two magical flying books boning each other is a television series that I’m going to keep watching. 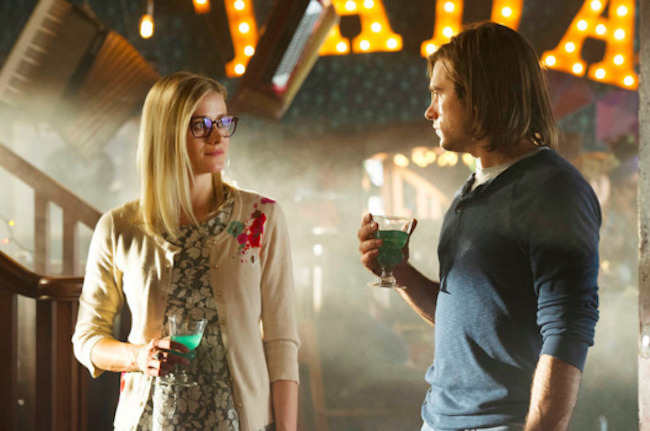