Two oz. tequila, one oz. lime juice and one oz. of Cointreau. Combine these ingredients and you have the most popular drink in America—the margarita.

There are a few stories about the origin of this classic staple. One claims the margarita was invented by Carlos “Danny” Herrera in 1938 at his restaurant in Mexico for a customer (and former Ziegfeld Follies dancer), Marjorie King, who was allergic to many spirits, but not to tequila. According to Jose Cuervo, though, a bartender concocted the cocktail in honor of Mexican showgirl Rita de la Rosa in 1938. Others say Dallas socialite Margarita Sames mixed the drink for her guests at her Acapulco vacation home in 1948, and that Tommy Hilton was in attendance and later brought the drink back to his hotel chain. It’s also widely believed that the margarita was first mixed in the El Paso-Juárez area of Mexico at Tommy’s Place Bar on July 4, 1942 by Francisco “Pancho” Morales, who Mexico’s official news agency Notimex and many experts have say has the strongest claim on the recipe.

In these versions of the drink’s origin story, the inspiration for the name is unknown, but two final tales may have that insight. Many accept that the drink was invented in October 1941 at Hussong’s Cantina in Ensenada, Mexico, by bartender Don Carlos Orozco. As the story goes, Margarita Henkel, daughter of the then German ambassador, visited the cantina and Don Carlos, who had been experimenting with drinks, offered her one. As she was the first to try the drink, Mr. Carlos decided to name it after her. Others believe it was created at the legendary Balinese Room in Galveston, Texas where head bartender Santos Cruz created it for singer Peggy (Margaret) Lee, supposedly naming it after the Spanish version of her name, Margarita.

Just as the story has changed and evolved over time, so has the Margarita. While it’s regularly served in the traditional on-the-rocks form and as the popular frozen spinoff, mixologists have spent decades creating new and unique versions of this classic tequila drink.

In celebration of National Margarita Day, we’ve curated a list of seven twists on this classic cocktail.

Shake first five ingredients in a cocktail shaker with ice. Strain into a chilled coupe glass that has been half-rimmed with rose sea salt, and top with a dash of rose . Garnish with a rose petal, if available.

Shake all ingredients in a cocktail shaker and strain over fresh ice into a double old fashioned glass. Garnish with a slice of fresh kumquat.

Muddle some of the cucumber with simple syrup and lime juice. Combine all ingredients in iced mixing glass, shake and strain over fresh ice. Garnish with cucumber slices.

*To prepare raspberry agave syrup: Combine 16 oz. filtered , 16 oz. agave and 16 oz. fresh organic raspberries in a pot and heat on low until desired flavor is reached (about 30 minutes). Strain through a fine strainer and allow to cool. **To prepare vanilla infused Maldon sea salt: Mix two vanilla beans with 8.5 oz Maldon Sea Salt in an airtight container and let sit in a cool dry place for a minimum of three days.

Shake and strain over crushed ice into rocks glass that is half rimmed with Sal de Gusano.

Rim glass with a slice of lime and roll it in grounded mustard seed and sea salt mixture. Shake Tres Agaves Blanco tequila, lime, simple syrup, triple sec and mustard powder in a cocktail shaker and strain over ice into the rimmed rocks glass. Garnish with a lime wheel and serve.

Shake and serve over ice in rocks glass. 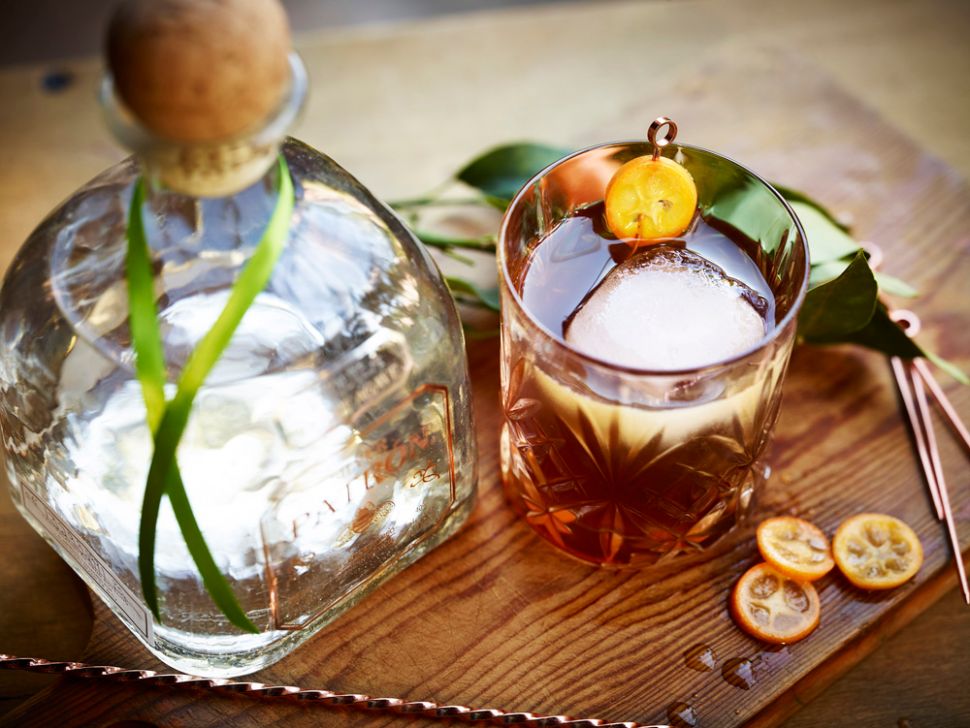