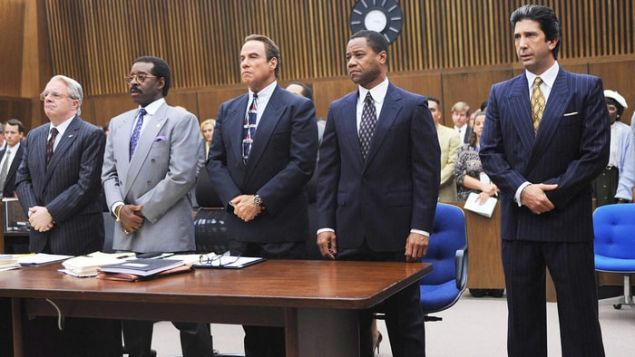 The lawyers of O.J. Simpson on American Crime Story. FX

I mean, some version of that conversation may have happened at some point. But no way did it happen then and like that. And does it matter, for the sake of the story we’re watching, if Courtney B. Vance gets some extra powerful screen-time? Does it detract from the main narrative of The People V. O.J. Simpson?

Of course not. If anything, it enhances the trial of the century; by giving these speeches to certain characters–in this episode, most of O.J.’s dream team, the defense, Judge Ito and the wafting, listing lily of Brentwood, Faye Resnik—they become not just players in the tale but also the Greek chorus commenting on these events 20 years later. It’s a doubly neat trick, this show’s writing style, and I can’t seem to exactly pinpoint how and why this show works when it should and could fall under the weight of its own hubris. But so far, so good.

This is the episode where the fissures start to show in the Dream Team, assembled by O.J. Simpson, a man who just wishes he could get back to disco partying instead of throwing jail food around his cell.

Lawyer team: assemble! Robert Shapiro starts with a bold–and historically credible– move by asking this team of defense counsel: “Who thinks OJ did it?”

Haha. You have to understand what a ludicrous question that is. Why it must hang in the air until a troubled F. Lee Bailey (Nathan Lane), dryly adds “Ooookay,” and the group moves on, to save Shapiro from further embarrassment. The truth is: the truth is irrelevant. These men have been hired to do a job, not judge the guilt or innocence of their client. With the exception of Robert Kardashian, nobody is in that room because they believe O.J. is innocent. But the stakes are so much higher than that, and it’s ultimately Shapiro who folds and by the end of the episode basically admits with his plea deal that he believes O.J. murdered Nicole and Ron. Then again, plea deals–as Bailey notes to Cochran after being humiliated when he found out from Shapiro he was working the case pro bono– is what that big-headed man is good at. Not being a trial lawyer: someone who can stalk a courtroom and woo jurors and charm a judge. That, Bailey implies with all the subtlety of the Iago he’s been cast as in this drama, is where he and Cochran shine.

Now: is this historically accurate? That it was Bailey who back-staged maneuvered Cochran into being O.J.’s lead counsel because of his dislike for Shapiro? Not exactly: the show makes it look like O.J. and Cochran came to each other warily at first, but in reality, O.J. always saw Cochran as his ticket to freedom. His hemming and hawwing on the line after Shapiro returns from Hawaii to find the whole camp defected over to Cochran’s office shows you just how much agency they are affording O.J. in their rendition of the story.

But isn’t that, in and of itself, kind of interesting? The scriptwriters, Scott Alexander and Larry Karaszewski, are essentially doing to O.J. what the whole spectacle of the trial did 20 years ago: shift his guilt or innocence into irrelevance. This isn’t a show about O.J. Simpson, we’re beginning to realize. This is a show about “The People V.”

One point the show does get super right is how Marcia Clark dismissed the jury expert out of hand when he claimed that black women–a group Clark always found she did well with–didn’t like her. Called her “strident” and “arrogant” and “a bitch.” We discussed this all last week, in terms of how unfair it was to Clark, a woman, when someone like Cochran could be considered just as arrogant, just as strident, and yet score much, much higher among all jury pools.

But last week we didn’t get into the thorny issue of: okay, but what if Marcia Clark’s arrogance really did contribute to the prosecution losing the case? Again and again, we see Clark take the moral high ground…barely challenging any jurors while the defense vetoes to anyone who is…well…white. Marcia is so completely oblivious–willfully so, it could be said–to how this trial is falling down on racial lines that even when observing a mock jury through a two-way mirror and seeing the white hands raised for O.J.’s guilt and the black hands raised for O.J.’s innocence, she still refuses to challenge the defense essentially selecting the jury themselves after the arduous voir dire process. Maybe it wasn’t arrogance. Maybe she was just fucking tired. And the trial hadn’t even started yet.

The hair stuff: Cochran challenging the state on how many hairs to take from O.J.’s head. And Judge Ito–in a ruling that lacked the backbone that he claimed had got him the job–allowed a special hearing to determine how many hairs were necessary for forensics. By the way: nice little foreshadowing when Ito’s wife, Margaret Ann York, the highest-ranking woman in the Los Angeles Police Department, hovered her finger over Mr. Fuhrman’s name before signing off on the “conflict of interest” form. That will be important later.

Shapiro, in fairness, didn’t need Bailey to dig him a hole with the Dream Team. We see him put his foot in his mouth all by himself, thank you very much. He doesn’t need help looking like an asshole, not while telling Cochran: “You know how these people think!”

“You need to choose your vernacular very carefully,” Cochran reprimands.

When they have a jailhouse meeting, O.J. resents Shapiro not attending because of a dinner. That wasn’t Bailey’s work…Shapiro generally just hated being in prisons. It bummed him out. He was much more of a man about town; enjoying his celebrity bubble the case afforded him for a short while. But Cochran uses the time for a pep talk to win O.J. over: “Do you know what you mean to people?”

By the time O.J. Simpson pled “Absolutely 100 percent not guilty,” Shapiro could have read the writing on the wall. That was Cochran’s kind of vernacular, so to speak, not O.J.’s. It was also, admittedly, a winning strategy that was devised in part by Shapiro but executed by Bailey and Cochran: to put the L.A.P.D. on trial instead of O.J. Simpson.

Their biggest break at first appears like a damning charge: Faye Resnick’s book deal, inked in the immediate aftermath of her friend’s death and ghostwritten with the National Enquirer‘s Mike Walker. Nicole Brown Simpson: The Private Diary of a Life Interrupted was a lurid, tabloid-y supposed tell-all about Nicole’s promiscuousness and drug addictions. “There’s no good time to find out your best friend’s been murdered, but especially not three days into cocaine treatment.” Kudos to the director and cinematographer for this episode, who loop around Resnick like she’s Stevie Nicks in American Horror Story: Coven. “Nicole came to me in a dream and told me I should write a book.” If she’s summoning the ghost of her dead friend, it’s not to give her a Brentwood Hello but to spit on her grave.

I just want to take a moment here and admit into testimony Exhibit A from Dominick Dunne’s reporting of the case for Vanity Fair. In the early days, he’s a big fan of Ms. Resnick and her crew, although eventually, hindsight being 20-20, he realizes the damage she’s done. 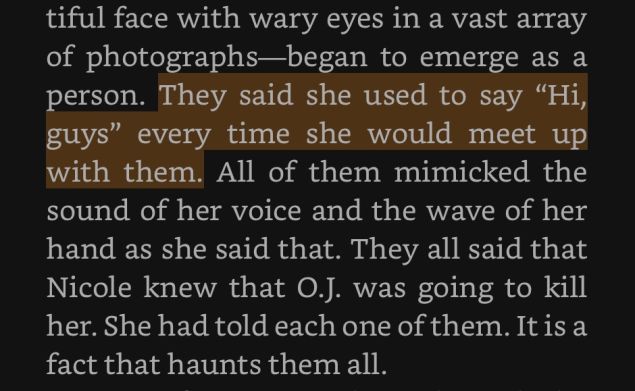 Resnick’s book, which would go on to be a New York Times #1 bestseller, made her a compromised witness for the prosecution that might have called her to testify. She made Nicole look terrible, and allowed the defense the first grab at what they would turn into a smear campaign against the dead woman and her friend, painting her as a whore was killed over a drug deal. So sad.

And just in case we lost perspective in the three-ring circus of the jury selection, Ron Goldman’s father steps in with his grieving daughter, railing at Marcia Clark, “Ron is a footnote to his own murder.”

“He didn’t drink, he didn’t do drugs. He should be celebrated,” Mr. Goldman seethes, and when Marcia Clark does her Marcia thing by promising to get the bad guy, he swats back “You better.”

We can see the pressure building for Marcia, and it’s hard not have sympathy for her despite her brittleness. She seems the most humane when knocking back drinks with her eventual co-counsel on the case, Chris Darden. Was there ever anything between these two? Maybe just a love of justice and the inability to cope with the stakes of the trial. But for a moment it is the two of them, not the bickering defense, who seem like the real Dream Team. 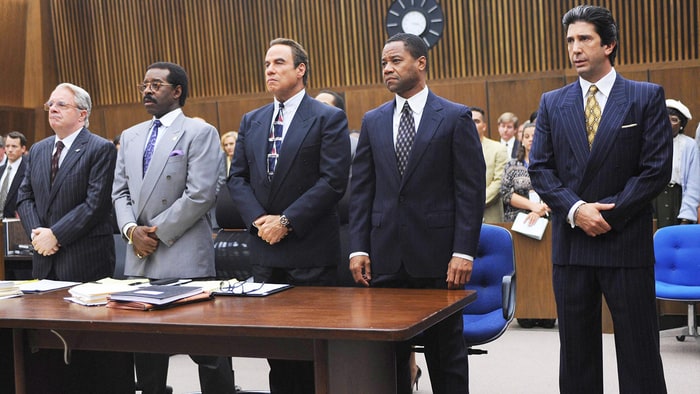