In the month or so that I’ve had to watch the six screener episodes released by FX for Ryan Murphy’s The People v. O.J. Simpson: American Crime Story (or TPvOJS:ACS for those of you super-fans of my unwieldy American Horror Story acronyms), I’ve gone from barely remembering anything about the case to being an armchair super-sleuth. I’ve read Jeffrey Toobin’s book on which the show is based (for which Toobin acts as both a consultant as well as *spoiler alert* an eventual character), I’ve read Dominick Dunne’s Vanity Fair dispatches from the trial (*spoiler alert* he also shows up as a character in the series), I’ve read Mark Fuhrman’s Murder in Brentwood, former Manson prosecutor-turned true crime novelist Vincent Bugliosi’s Outrage: The Five Reasons Why O.J. Simpson Got Away with Murder and I(f) I Did It: Confessions of the Killer from the incarcerated celebrity himself. I watched news footage and Oprah specials with all the major players from the case, journeyed to Los Angeles to profile Kato Kaelin and accosted Sarah Paulson in the bathroom of the Sunset Towers by screaming at her “I LOVE YOU AS MARCIA!” (In true Clark-like fashion, Ms. Paulson merely scowled and said she hadn’t even seen the series yet.) Awkwardly, when I sat down for the rest of my meal, Paulson was at the table right next to me, having dinner with—who else?—Ryan Murphy.

If the O.J. case turned Los Angeles into a stage for one singular, horrific story, The People v O.J. Simpson is doing a pretty good job recapturing that momentum twenty years after the fact. It is also the finest work to date of its executive producer, here showing uncharacteristic restraint by handing the show’s script to Scott Alexander and Larry Karaszewski, who bring a wryer sensibility to the story without losing the camp. (As the writers of both Ed Wood and The People Vs. Larry Flynt, these two know their way around both a courtroom procedural and Weird L.A.) Murphy even allows other directors (John Singleton, Anthony Hemingway) a shot, to great effect in some of the later episodes.

But let’s start at the beginning, because this premiere could be taught in college screenwriting master classes as an example of a perfect pilot script. Not a scene was wasted, and most pulled off the difficult trick of both moving the narrative forward (and condensing so, so much) while simultaneously showcasing incredible character development. We open with footage from the Rodney King incident and the subsequent not-guilty verdict delivered to the LAPD only three years prior to the O.J. case, teeing up one miscarriage of justice to contextualize the one we’re about to watch. The final shot is equally iconic, and one of the few I have in my memory of the actual event (to be fair, I was 10 at the time of the Simpson trial): a white Bronco, speeding down the 405, cutting off another car as it veers into the left hand lane.

In between, we are subject to 120 minutes* of a mounting panic attack shot with some of the most dramatic cinematography since Kubrick’s The Shining. It sounds like a cliché (because it is), but two of the show’s biggest players are unlisted in the credits: the city of Los Angeles, depicted here with a lurid verdantness that suggests a glut overabundance (the flowers surrounding Nicole’s open casket, the number of people in O.J.’s house as Robert Shapiro arranges for him to turn himself in, the chaos of dirty dishes and spilled breakfast cereal that Marcia Clark is too distracted to clean up); and the camera itself, which zooms toward and away from its titular subject with a reverence that calls to mind French filmmaker Luc Moullet’s statement that “Morality is a question of tracking shots.” 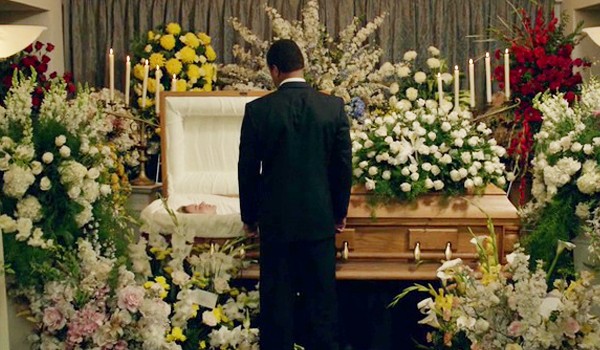 The acting in the show is stellar, A+, #1, with the exception being, unfortunately, Cuba Gooding Jr. as O.J. Maybe it was a choice on the part of the creators and actor to make the performance as tin-eared and hollow as possible, to heighten the sense of O.J.’s public performance as a charade, but the result is squishy and terribly overwrought: you can almost feel Gooding Jr. struggling against the tight transcripts of the dialogue. (Limited though he is, more-so than other characters, to things his character actually said during pivotal moments like his detainment behind his house by the LAPD and during the lie detector test administered by Shapiro and his defense team.) Luckily, even for those moments where O.J. doesn’t quite compel us with the charisma he was so famously known for, there’s always enough going on within the frame—sometimes the mere framing itself—to keep viewers stimulated and engaged.

When I spoke to actor David Schwimmer about playing Robert Kardashian, he said that he had been dubious about taking a role in a show that could be accused of being sensationalist or insensitive, and was only really sold on the project once Murphy and co. explained that they wanted to make the miniseries equivalent of Network. Rewatching the pilot, I was struck by how many scenes accomplished this tricky homage, especially in its early introduction of Johnny Cochran’s character (played with show-stopping aplomb by Courtney B. Vance), who didn’t actually  appear as a major player in the O.J. case till later. But establishing his presence in that scene with an idolizing Christopher Darden (Sterling K. Brown) was vintage Sidney Lumet: low cameras angled upward to get the righteous fury on Cochran’s face as he snarls at the young assistant D.A. “Choose a side!” or his Howard Beale-worthy delivery about how money is sometimes the only means to get justice. Again, great for exposition in examining the complicated relationship between the eventual prosecutor and defense attorney, but also just a real thrill to watch.

Sarah Paulson as Marcia Clark is equally riveting. When we first see her, she’s a harried single mother trying to wrangle her kids on a school day morning, and her disposition—flustered, short-fused, no-nonsense—doesn’t change when she’s dealing with the detective who originally calls to inform her about the O.J. case. (“Who?” she snaps dismissively at the detective’s attempts to jog her memory of the celebrity in question. “I don’t know who you are talking about.”) But as soon as the homicide is described, she perks up, a mix between a Marvel vigilante and a mom at the end of Mentos commercial, totally in her element as she re-addresses her children with full authoritative control: “KIDS! IN THE CAR! NOW!” One would assume from the way she’s issuing commands that she’s referring to her Batmobile.

And here’s where the show really gets interesting in terms of its writing: it manages to condense a LOT of backstory in one single scene where Marcia grills her male colleagues about the details of the case, including O.J.’s prior rap sheet for beating up Nicole. “He didn’t even do his community service. He got out, celebrity style,” explains one detective, who later adds, in the way of explanation for how badly the case was handled by the initial officers who detain O.J.: “It’s the LAPD and a famous guy.” This is such a crucial thru-line of the story, and one that in less capable hands could risk being overshadowed by the portrayal of certain events—through the vantage point of the videographer who managed to catch a shot of O.J. being handcuffed in his backyard by the police, say— as easily as it was in the actual case.

But again showcasing a genuinely deft touch, we see Marcia Clark yelling at the bungling incompetence of the officers while listening to a recording of their interrogation of O.J. in a room with several male colleagues, establishing that A) there is an external reality that the show is presenting as an unquestionable interpretation of how the events occurred as well as B) that Marcia Clark is a ball-busting badass. The fact that she’s paired with Bill Hodgman, a diligent and competent prosecutor who gets the sorry description of “being very thorough,” only heightens the difference between their styles, with poor, diligent Bill coming off like that helpful guy who is definitely going to die first in the horror movie. (*Spoiler alert*: he comes very close.)

We haven’t even gotten to Travolta’s depiction of Robert Shapiro, though Emily Nussbaum at The New Yorker pretty much nailed it with “an Easter Island head of fatuousness,” or Billy Magnussen’s deadpan delivery as Kato, talking to the police: “I’m not like, an official person.” Nor can we really get into how great the scene-stealing Connie Britton was as Faye Resnick, drawling out her whispers to Selma Blair’s clipped Kris Jenner with all the soap opera drama that the two women they’re portraying fail to generate when they appear together on Keeping Up With the Kardashians. As Robert Kardashian, Schwimmer has found the perfect post-Ross (or maybe anti-Ross?) performance; a crusader no less dogmatic than Clark, but for the other team. 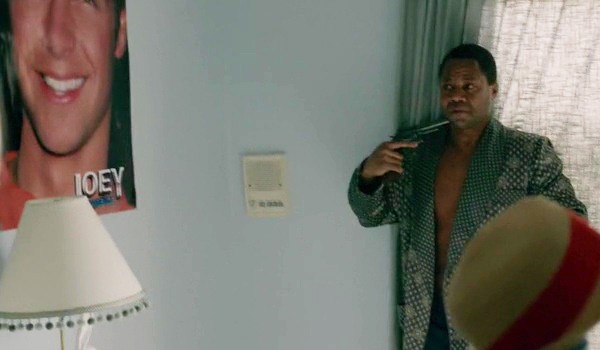 Robert Kardashian’s role in this drama is given a much bigger spotlight in the show than in Toobin’s book, and a cynic could (rightly) claim the inflation is to heighten our dramatic irony of how his brood eventually turns out. But the show again manages here to play it both ways: when he implores Simpson, holding a gun to his head “Do not kill yourself in Kimmy’s room. I love you, your kids love you, God loves you!” what comes across isn’t the wink at the future Mrs. Kanye West’s decorating skills (love that Joey Lawrence poster, though), but the sheer force of Mr. Kardashian’s beliefs, both in his friend’s innocence and a higher power. The real irony for audiences isn’t knowing how far the Kardashians will fall in his absence; it’s in how a good man such as this–a family man, a religious man–could have been so righteous while being so tragically wrong.

*(Thanks to FX, Ryan Murphy is not limited to the time constraints of regular programming conscripted to the rest of us mere mortals) 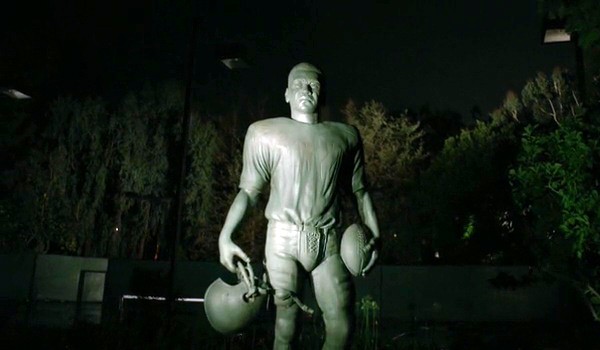