The modern social justice movement, or the new “political correctness,” vaulted into the spotlight last year.  Student protests swept across campuses with demands often focused on purging thoughtcrime—leading to heated debates on whether this movement is a dangerous pseudo-progressive authoritarianism or a long-overdue effort to achieve justice for all. A year-in-review piece in The Daily Dot in late December proclaimed 2015 “the year of the social justice warrior.”

The Daily Dot author, graduate student and political columnist Michael Rosa, hailed this trend and urged liberals to “embrace the term.” Yet the accomplishments he invoked are, as the social justice crowd likes to say, problematic. His Exhibit A, the legalization of same-sex marriage, actually had very little to do with the current social justice movement; it was the result of two decades of very different, pragmatic activism that focused on a clear goal—the legal right to marry—and stressed equality, not gay identity. And #BlackLivesMatter, also a movement with a specific focus—police violence toward African-Americans—has been arguably hurt, not helped, by PC dogma that suppresses discussion of thorny issues such as black-on-black crime and attacks “insensitive” dissenting speech (Amherst protesters demanded disciplinary action against students who had put up “All Lives Matter” posters).

Most Americans support gender equality, believe transgender people should be able to live as they wish, and reject anti-Muslim hate. But social justice warriors have turned these causes into malignant self-parody.

Unfortunately, Mr. Rosa’s other examples of “social justice” in action—the feminist revival, the new visibility of transgender issues and opposition to “Islamophobia”—are squarely in train-wreck territory. Not that there’s anything wrong with the principles: Most Americans support gender equality, believe transgender people should be able to live as they wish and reject anti-Muslim hate. But social justice warriors have turned these causes into malignant self-parody. Their feminism frets over men sitting with their legs apart on public transit, seeks dissent-free “safe spaces” and cries oppression at concern about obesity’s health risks. Their transgender advocacy demands respect for customized gender identities with personal pronouns that may change on a whim and crucifies a devoutly progressive filmmaker for a “transphobic” joke that presumes that female characters are anatomically female. Their anti-Islamophobia trashes feminist critics of conservative Islamism and victim-blames journalists murdered for publishing Mohammed cartoons.

Have the social justice warriors of 2015 supported some worthy causes? Sure. But much of their passion goes into speech and culture policing directed at victimless crimes that violate their moral taboos.

Consider last year’s protest against a Boston Museum of Fine Arts exhibit that allowed visitors to try on a kimono: Activists assailed this as “cultural appropriation” and racist imperialism, much to the bafflement of local Japanese-Americans and Japanese consulate staffers. Or consider the outcry over a T-shirt worn in promotional photos by stars of the film Suffragette, using a slogan from suffragist Emmeline Pankhurst, “I’d rather be a rebel than a slave.” This was blasted for “co-opting” the black experience of slavery and racism and ignoring the Civil War connotations of “rebel”—even though the quote had nothing to do with American slavery or Confederate rebellion and used both words in the universal sense.

Behind these outbreaks of self-righteous wrath is a distinct if somewhat amorphous ideology we could dub “SocJus.” (The callback to “IngSoc” from George Orwell’s 1984 is not quite coincidental.) At the center of this worldview is the evil of oppression, the virtue of “marginalized” identities—based on race, ethnicity, gender, sexuality, religion or disability—and the perfectionist quest to eliminate anything the marginalized may perceive as oppressive or “invalidating.” Such perceptions are given a near-absolute presumption of validity, even if shared by a fraction of the “oppressed group.” Meanwhile, the viewpoints of the “privileged”—a category that includes economically disadvantaged whites, especially men—are radically devalued.

Because SocJus is so focused on changing bad attitudes and ferreting out subtle biases and insensitivities, its hostility to free speech and thought is not an unfortunate byproduct of the movement but its very essence. You can be welcoming and respectful toward transgender people yet still be branded a bigot if you don’t quite believe that transwomen who identify as female but have an intact male anatomy are “real women”—and even if you keep that opinion to yourself, you can be challenged to prove your loyalty to the party line.

Obviously, retaliation for unpopular opinions isn’t limited to SocJus, but it’s hard to think of another present-day political group so unforgiving to even inadvertent verbal offenses. At California’s Claremont McKenna College last fall, Dean of Students Mary Spellman had to resign after protests. Her crime: In an email replying to a student who had written to her about racial issues on campus, Ms. Spellman had mentioned her wish to “better serve students, especially those who don’t fit our CMC mold,” supposedly implying students of color don’t belong at the school.

Nor is any other group so preoccupied with linguistic cleansing. A discussion on a social justice forum advocates expunging from one’s vocabulary such “ableist” terms as “crazy,” “dumb” and even “depressing”; at Smith College last year, the student newspaper’s report on a panel (ironically, one dedicated to free speech) rendered “wild and crazy” as “wild and [ableist slur].” Calling somebody one’s “spirit animal” is frowned upon because it’s an “appropriation” of a concept specific to some oppressed cultures. An academic list of “microaggressions” includes asking, “Where are you from?” or complimenting a foreign-born person’s English.

SocJus speech- and thought-policing includes self-policing. “I rigorously manage my own thinking and purge myself of dangerous ‘unthinkable’ thoughts—‘mindkill’ myself—on a regular basis,” wrote columnist and former Jeopardy champion Arthur Chu in a 2014 Facebook discussion. “This is what you have to do to be a feminist anti-racist progressive, i.e. a social justice stormtrooper.”

Some conservatives describe SocJus as “cultural Marxism”; it has also been compared to Maoism, and particularly to the Cultural Revolution, with its focus on re-education and public confessions of ideological errors. But, as atheist blogger Rebecca Bradley has argued, the movement also has many elements of an apocalyptic religious cult that sees the world as mired in sin and evil except for a handful of the elect. A popular post on Tumblr, a major SocJus hive, laments, “being on Tumblr all the time gives me such a deluded view of the world. I start believing that everyone is pro-choice, open-minded, have moral compass…care about sexism, racism, body shaming, etc, but then I walk out my front door and realize that everyone is still just as moronic as they were two years ago.” This is a classic cult mindset.

There is a word for ideologies, religious or secular, that seek to politicize and control every aspect of human life: totalitarian. Unlike most such ideologies, SocJus has no fixed doctrine or clear utopian vision. But in a way, its amorphousness makes it more tyrannical. While all revolutions are prone to devouring their children, the SocJus movement may be especially vulnerable to self-immolation: Its creed of “intersectionality”—multiple overlapping oppressions—means that the oppressed are always one misstep away from becoming the oppressor. Your cool feminist T-shirt can become a racist atrocity in a mouse click. And since new “marginalized” identities can always emerge, no one can tell what currently acceptable words or ideas may be excommunicated tomorrow.

Conservatives have long railed against ‘political correctness’; but now, even some progressives are saying that activism based on identity politics, self-righteousness and intolerance toward dissent and error is a dead end.

Intersectionality also makes SocJus uniquely vulnerable to internal conflicts and tensions. How do you reconcile progressive beliefs about gender with an “anti-Islamophobia” that treats defenders of misogynist and homophobic Islamist fundamentalism as sympathetic “marginalized people?” Very awkwardly: At Goldsmiths College, University of London last December, campus feminist and LGBT groups joined in solidarity with the Islamic Society, which complained that a campus talk by Iranian-born feminist and ex-Muslim Maryam Namazie was a violation of “safe space.”

The social justice movement has many well-meaning followers who want to make the world a better place. But most of its “activism” is little more than a self-centered quest for moral purity. Dropping “crazy” from one’s vocabulary won’t improve health services or job opportunities for the mentally ill. Protesting a white singer’s “appropriation” of cornrows or rap music will have zero effect on the actual problems facing African-Americans.

The influence of SocJus has spread beyond academia and activist circles. It is a strong presence in the tech world (a popular code of conduct for digital communities explicitly “prioritizes marginalized people’s safety over privileged people’s comfort”) and in geek subcultures, such as the sci-fi and comic-book fandoms. It also sets the tone for much of the online media. But its unchecked ascendancy may be over.

Conservatives have long railed against “political correctness”; but now, even some progressives are saying that activism based on identity politics, self-righteousness and intolerance toward dissent and error is a dead end. What’s more, as Conor Friedersdorf has argued in The Atlantic, the left’s embrace of racial identity politics has spurred an alarming rise of white identity politics on the far right. It doesn’t help that the stigma against racism loses potency when “racism” can mean wearing a sombrero on Halloween.

Fortunately, a more individualist, culturally libertarian backlash has been brewing as well—exemplified by the acclaimed 19th season of South Park, which made PC its central theme. Who knows? If 2015 was the year of the Social Justice Warrior, 2016 could be the year of the anti-authoritarian rebellion. 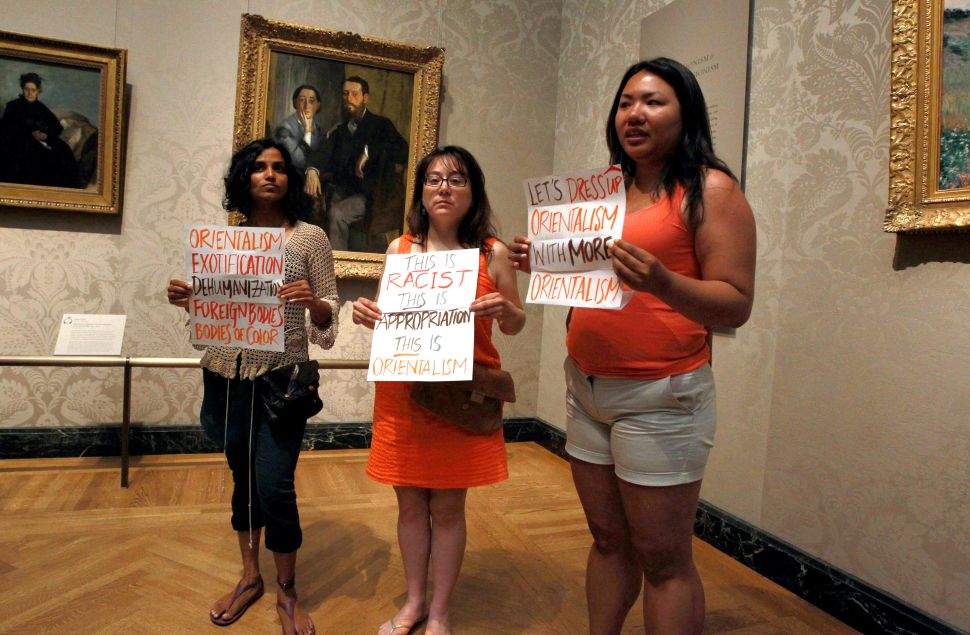