Alexandria: This is the story of how you are reborn. About how you rise from your own ashes to become the first true city of the new world.

It’s a process, rebirth. It isn’t easy, and it doesn’t happen all at once

First it takes your father, the man who built you up; he goes quickly. Then your mother, who shaped you, more slowly. But that’s not enough to get you there, to shape you into the community this world needs.

It has to breach your skin, to infect you. Attack your soft tissues; tear out an organ or two.

Take an arm. An eye.

But then, mustering everything you have left, you fight it off. Limping, tired, with blood in your eyes, you hack and slash and burn until the infection is gone. And in that baptism of pain and fire you become something new.

This episode is staged, deliberately, as a coming together. And so it starts by emphasizing how our cast is off in many different fragmented groups yet again, visiting each in turn.

We open on the tanker truck from Plot Device Gas Company carrying Daryl, Sasha and Abraham back to Alexandria, when they’re stopped by a group of plug uglies on motorcycles. Their leader smarms his way through a clearly well-rehearsed speech about how resistance is futile and how everything they own now belongs to someone named Negan (dun dun dun).

Just as he’s about to shoot Sasha, mostly for kicks, Daryl gets ahold of Chekov’s RPG and lets loose on the whole biker gang, reducing them to flaming cinders in seconds. It is truly one of the most satisfying things The Walking Dead has ever done. You kinda knew it was coming, but that didn’t make the payoff any less delicious. Good thing too, considering the ordeal that’s to follow.

To wit: Rick and his team are still slowly winding their way through the Alexandria horde, wearing bedsheets soaked with walker guts. New plan: They’re going to go get the cars from the quarry and lead the walkers away that way. Meanwhile Gabriel volunteers to take Judith to his makeshift church and keep her safe.

And yes, I get it, this episode is about redemption, and lots of heretofore awful and/or cowardly characters are going to get the chance to become braver/better people today. Eugene, Enid, Denise, a bunch of Alexandrians whose names none of us bothered to learn, etc. Even the crazy sick gross-toothed Wolf guy gets to make good.

And so yes, of course Gabriel deserves his moment too. But this part feels pretty unearned, after all the time we’ve spent watching him be a craven traitor. And even if we’re inclined to give him the benefit of the doubt, why would Rick decide suddenly to start trusting him?

They try to convince softly whimpering Sam to go with Gabriel too, but he’s committed to staying with his mom. Which proves fateful—I guess they silenced his outcry at the end of last episode, but he’s a ticking time bomb. He finally just full-on flips out when he sees, and presumably identifies with, a child walker. (Isn’t it odd we don’t see more of those?)

Right away, he gets eaten, then Jessie isn’t able to control her grief, and she gets eaten too. But she’s still clutching Carl’s hand, so Rick has to use his ax to chop his son free. Sending freshly devastated Ron right back into vengeance mode. He pulls a gun on Rick, Michonne slices him open just as he gets the shot off, and then walkers are on Ron too. Just like that, a matter of seconds, a whole family is food for the dead.
The errant gunshot turns out to have gone right through Carl’s right eye, and a collective cheer goes up (especially from fans of the comic book, who have been waiting for this for a long time).

Clearly someone needs a doctor. Only unfortunately she’s busy being held hostage by the Bad Wolf. When they try to get over the walls, he turns back for her (redemption!) and gets bitten. She steers them back toward the infirmary for a quick, friendly amputation, and…Carol shoots the Wolf dead from a balcony.

See, Carol and Morgan have woken up after falling through the floor and continued their completely useless debate. Which we’re all tired of by now because a) neither of them is going to budge from their positions, and b) Carol’s obviously right.

But now at least Denise is back in her infirmary, just in time to receive her new patient: Carl with a big hole in his head. She treats him while Rick runs outside with a very elaborate and well-thought-out plan to just start killing all the walkers he can with an ax. It’s near-suicidal, but then Michonne joins him, followed Heath, Spencer and Aaron, widening a small circle by slashing their way through the horde.

Meanwhile there’s Glenn and Enid, trying to find a way to get Maggie down from her precarious platform by…searching for guns in a church? Glenn finally convinces Enid that in the apocalypse, being a morbid, whiny teenager is even more obnoxious than it always was. When you’ve survived so many of the people you love, you’re not also allowed to be a jerk about it.

So Enid climbs up to save Maggie (if she can climb up, why can’t Maggie climb down?) while Glenn draws the walkers away with the rather conveniently discovered church gun. He runs out of ammo and is nearly food, but Sasha and Abraham arrive with machine guns just in time.

Which further aids the efforts of Rick and his growing band of hand-to-hand walker killers. All of Alexandria has joined in now, even the weird wimpy ones we barely know. Daryl opens up the tanker truck and pours out gas onto the lake, wastes an RPG to set it on fire (a match would have worked just as well, dude), and then just lets the light draw the walkers into their deaths. Making me wonder why everyplace on earth with a walker problem doesn’t just build huge fires and let the problem take care of itself?

We get a powerful montage of all the residents of Alexandria, close-ups on their faces as they hack and slash their way through the thousands of walkers. We’re made to bear witness as their community is violently born, sealed in blood and seared in flame.

In the morning, every walker is dead. And Rick tells an unconscious and barely alive Carl that he has now seen what the Alexandrians can really do, and it gives him hope. That Deanna’s vision is possible. That this can be a place where life—real, sustainable life—can rise from near-death.

And that’s when Carl moves his fingers. 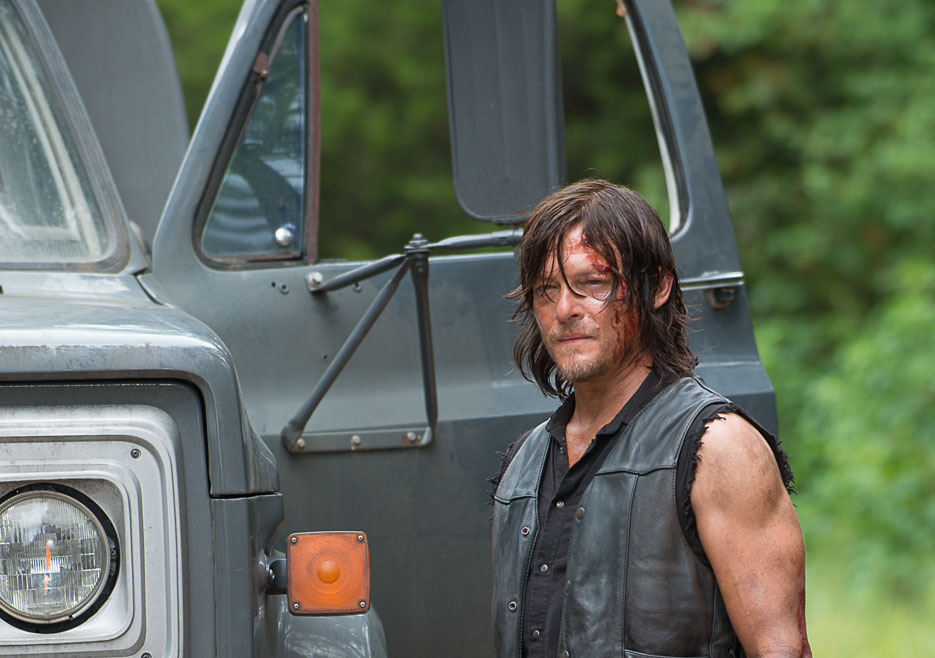