Within the first three minutes of this week’s episode of The Walking Dead, two different characters basically place orders for specific consumer products. Just, y’know, putting in requests for some extra amenities. In the apocalypse.

First there’s Michonne—wearing a bathrobe, a towel turbaned on her head—who is all out of toothpaste, so she asks Rick to find some when he goes out on his scavenging run today. Oh, and just in case: Her favorite kind is spearmint and baking soda.

The next thing we see is Doctor Denise asking Daryl, who’s joining Rick on his run, to see if he can find her a particular kind of soda (they never say what kind it is, but to my eyes it looks like Orange Crush). Thing is, she doesn’t even drink soda; she just wants it to surprise her now-girlfriend Tara—who may or may not actually like it, she’s just been talking about it in her sleep. She thinks.

Can you envision characters earlier in the history of this show asking for such luxuries? We have to imagine that Michonne, like many of our heroes, has gone for months at a time without brushing her teeth at all, much less using her favorite flavor. Locating clean has often been an issue, and now a whole episode basically revolves around finding canned soda for a sentimental gift?

The soda is included on a list Denise gives Daryl of medical supplies to look out for, and she’s drawn a line between the medicine and the soda—a (rather unnecessary) indication that unlike the medicine, the soda is utterly and conspicuously frivolous.

And that line may as well be drawn between this episode and the rest of The Walking Dead. Serious things happen in “The Next World”—we meet a new, potentially dangerous character, some of our heroes are at least momentarily in danger, there are hints of a looming food shortage in Alexandria—but overall the episode is about things that just seem so…unnecessary.

The town has gone through its trial by fire, the show seems to be saying, it has survived, and now it is allowed to take a breath, to luxuriate a bit instead of running all the time. And this would be fine, except that a) this goes counter to the show’s entire philosophy, as embodied in everything Rick has ever said about Alexandria up until last week—that comfort makes people weak and eventually dead, and b) it makes the whole episode feel ineffectual and dumb, as if a slapstick comedy has taken the reins. At any point before now, a truck full of food sinking to the bottom of a lake would have been treated as an existential crisis. Here it’s basically a punchline.

After a whole half-season of episodes that took place over the course of 48 hours total, we are now some number of unspecified weeks in the future, telegraphed by the fact that recently-shot-in-the-head Carl is fully recovered, if cyclopean, and Judith is now a full-fledged toddler. Oh, and also there aren’t thousands of dead walkers piled up all over town. Things in Alexandria have clearly settled into a peaceful pattern and people are starting to think about a sustainable future, which means locating supplies. But it’s been a while since they’ve found much of anything, having stripped the surrounding areas bare.

Rick is a smart guy, but he’s also a guy who thinks with his gut, which means he’s convinced that by the “law of averages” they’re bound to find something soon. Which is stupid, considering that the more stuff you take out of a particular place, the less likely you are to find new things there. And the longer humanity in general is forced to survive in a condition of scarcity with no new production, the worse that scarcity is going to get. The law of averages, which is a fallacy under normal circumstances, is just plain idiocy these days.

But they do actually find a truck full of food and other supplies, almost like magic—Eugene tells them to look for sorghum, and they find the truck (which has a lot of stuff in it, but not necessarily sorghum) behind a door marked “sorghum.” And the truck even more miraculously runs and has gas, so they can just drive it home. But that’s literally the last thing that goes right for them.

When they stop to try to break into a vending machine to get Denise’s soda, they are accosted by a stranger, a masked, bearded, talented martial artist, escape artist and con man who calls himself Jesus. He steals the keys and drives away in the truck. Daryl and Rick track him down and steal it back, but he stows away on the roof. Then, while they’re fighting, they lose control of the truck, which first knocks Jesus out and then rolls itself right into a lake. Goodbye Orange Crush, goodbye toothpaste, and goodbye several months’ supply of food for a whole town.

Daryl wants to just leave unconscious Jesus to get eaten, but Rick is convinced he might actually be a semi-good guy—he did have a chance to shoot Daryl, but killed a walker instead. Also, he’s conspicuously clean, which makes Rick like him for some reason. So they tie him up and take him back to be treated by Denise. But he escapes, of course.

Back in Alexandria, Spenser has been wandering outside the walls with a shovel strapped to his back and refuses to say why. Michonne is still trying to live up to the leadership role Deanna foresaw for her, and what better way than to try and help Deanna’s kid? So she joins him on his mysterious stroll.

Also tromping around outside the walls are Carl and Enid, hanging out and reading comic books and eating junk food, because they’re teenagers and apparently there aren’t any comic books and junk food in places where monsters aren’t constantly roaming around trying to eat them. They have some teenagery arguments, and eventually stumble onto why Spenser’s got the shovel: He knows his walker-fied mom is out there and wants to kill and bury her.

Carl leads dead-Deanna to Spenser so he can do his thing. Later he explains that he didn’t kill her himself because she deserved to be killed by someone who loved her. (And then he says he’d do that for Michonne, which is about as close as a kid Carl’s age is going to come to telling her he loves her.) Which is sweet and all, but again, it just reeks of luxury and extravagance. They’re living in a world that is trying its hardest to murder them, a world overrun by monsters, and they’re debating over who has the privilege of killing a particular monster?

Shouldn’t they all be worried that they’re becoming just like the Alexandrians when they first met them, all soft and weak and stupid? Isn’t this all just a recipe for being decimated by the next threat that comes their way? *cough*Negan*cough*

Oh, and Rick and Michonne hooked up. Because why not. 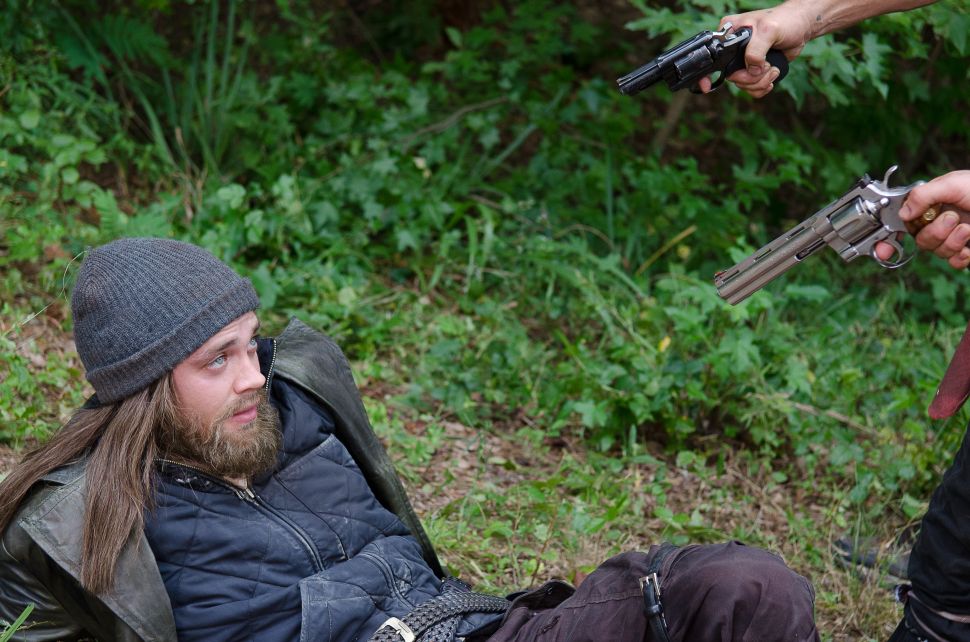