“Your world’s about to get a whole lot bigger.” —Jesus

By now it should be clear that the back half of season six is going to be all about rebuilding. Every place our heroes have hung their hats before now was overrun or destroyed, and they moved on. But when Alexandria was invaded, they fought back, decided to stay and do the hard work of rebuilding. Not just their little community, but the world around it. And that all starts with Paul “Jesus” Rovia.

But then, they have no reason to trust Jesus. He’s a con man, a trickster and a liar. He escapes from his captivity and can’t even admit what he clearly did—“knots untie and locks get picked,” he says, using a weird passive construction to deny his own agency. He’s obviously manipulating them. And yet none of that particularly matters now, once we’re talking about remaking the world. He’s talking about other settlements to trade with. That’s the way to real rebuilding—“the start of everything,” Rick says. But to make it work, they need to start down this path of trust.

They have to establish a trust baseline with Jesus—which starts from the fact that even though they’ve been fighting, both sides have had an opportunity to kill the other and both have declined. They warily decide to accompany him back to his community the Hilltop, and on the way they deepen this trust by rescuing a Hilltop group who were in a crash.

The scenario is set up in every way to seem like a trap—they just happen to drive only a short time after the crash, it requires them to follow the victims into a small space, etc.—but it turns out to be legit. And they’re rewarded almost mystically for their trust: One of the people they save is not just a doctor but an ob-gyn, who now owes a debt to expectant parents Glenn and Maggie. Score another big one for the trust column.

Not that it’s going to be as straightforward as all that, of course. The Hilltop clearly has a lot going for it, in terms of fairly decent, clearly hardworking people and a willingness to talk trade. But it’s also got a paranoid soldier/scavenger class, a skeevy and self-centered leader, and big problems looming on the horizon.

Meanwhile, it’s not like Rick and co. make ideally trustworthy trading partners. Sure, they have a fairly clear moral bent, not to mention an arsenal and the skills to use it. But they’re also raw, antisocial, and fairly easy to set off on a kill-crazy rampage. When Hilltop’s leader Gregory gets stabbed, Rick full-on murders his attacker with a knife in the neck and then stands up, covered in arterial blood, and shouts “What?” as if his actions should be self-evidently acceptable to anyone not an idiot. The scene reads almost like a parody of The Walking Dead’s approach to Rick Grimes as a character—as a knee-jerk self-justifying aficionado of extreme violence. Intentionally so, because that’s how he must appear to these people who have just met him. We may laugh, but in a profound sense, they’re not in on the joke.

Then again, Rick knows this about himself, which is why he sends Maggie in to negotiate with Gregory instead of him. (Also, Deanna was grooming Maggie to be her successor, which I guess means she’s technically supposed to be leading Alexandria at some point?) But Maggie doesn’t have all of the important facts, and so is at a disadvantage. What she knows is that Alexandria has guns but needs food, and the Hilltop has food and needs guns. (Everyone’s a bit unclear on who has more medicine.) Food is more critical than guns, though, and Gregory, knowing this, set his demands too high: a life of indentured servitude.

What Maggie doesn’t know is that the Hilltop already has its own servitude problem: The local badass Negan, whose name Rick’s team has heard but still knows little about, has them under constant threat of extinction unless they turn over half of what they have on a regular basis. And he’s getting greedier, capturing one of the Hilltop boys and sending his brother to kill Gregory in exchange for his life.

After Rick dispatches the attacker, the Alexandrians are in a much better negotiating position. Gregory may have cut a debilitating deal with Negan to avoid confrontation, but “Confrontation’s never been something we’ve had trouble with,” says Rick, in the understatement of the apocalypse.

So tough Maggie offers a new trade: Negan is going to bleed you guys dry eventually. But we’ll take care of your Negan problem, and in exchange, Alexandria gets half of everything the Hilltop has. It could look like the Hilltop is just trading one bad deal for another, but rather than Negan’s ongoing theft, built on extortion, this is a one-time deal, built on trust. This is all about rebuilding, right?

Oh, and one more thing gets thrown into the deal: an ultrasound for Maggie. Which is weird, because the doctor whose life they saved already promised her medical care, so it seems unnecessary to bring it up again. Maybe she just wanted to twist the knife for Gregory—so to speak.

The strange thing about this episode is that so much of it is framed by Abraham’s rather simplistic internal conflict between his relationship with Rosita and his desire for Sasha. And that all gets mixed up with his incredulity that Maggie and Glenn are intentionally bringing a new life into this screwed-up world.

At first these scenes seemed irritatingly trivial, until I realized—and I think Abraham realizes—that this part is also all about trust. The tense detente with the Hilltop makes it clear: To be a trusting person, you have to be a trustworthy person. Abraham doesn’t have enough faith to have a child with Rosita, not because he doesn’t think the world is safe, but because he knows he’s not a safe bet himself. In his heart, he’s checked out, infatuated with someone else. What he chooses to do with this realization, that’s anyone’s guess. He sure does like looking at Maggie’s ultrasound photo, anyway.

In any case, all that’ll have to wait, because: it’s off to war! With an unknown enemy! Everyone knowing it’s probably going to end badly for at least some of them! 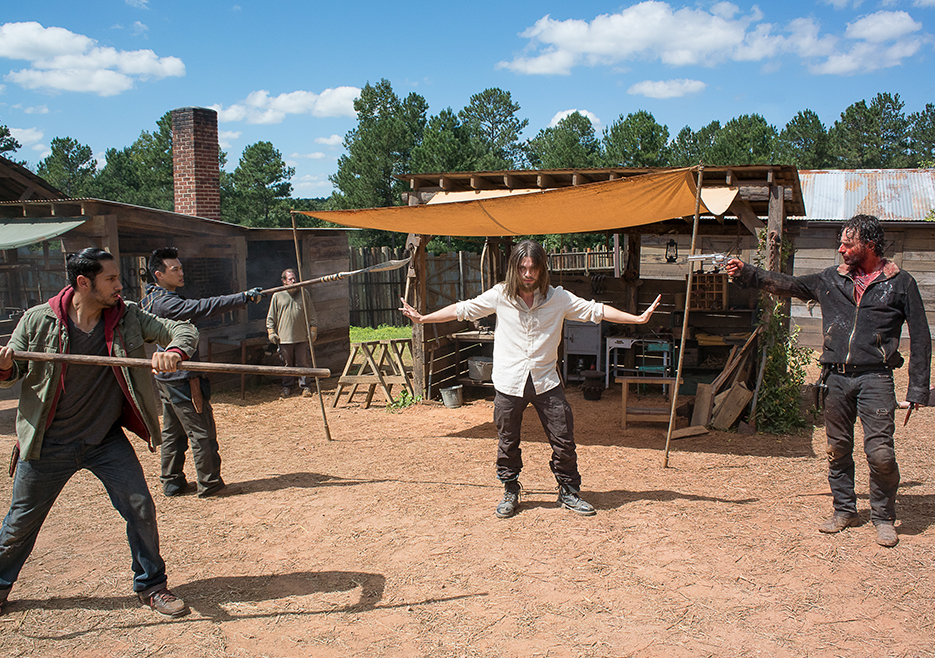