With the exception of that really good lizard man installment from a few weeks ago, these latest X-Files episodes have been either boring or boring and befuddling, the whole thing coming off like not so much beating a dead horse as beating the ground where a horse was buried over a decade ago. So it’s exciting to say that this hour isn’t boring in the least, although it certainly is befuddling as hell.

The episode opens with a Muslim man at prayer. He finishes up, scarfs a PB&J sandwich and some milk, and hops in his car. At an intersection, he smiles at some cowgirls (this is set somewhere in Southwest Texas) who sneer at him, and is then harassed by a cartoonish cowboy and some babes in a pick-up truck. Then the guy picks up his buddy, and the two head to an art gallery. The camera hangs back as the two park and walk inside, we see other folks milling around the entrance, and then there’s a massive explosion which sends bodies—some flaming—hurtling in every direction.

Cut to the title sequence. So far, so good—the stuff with the yokels seemed a little heavy handed, but whatever—and then comes the news that this episode was written and directed by series creator Chris Carter, at which point my heart sort of sank. Carter is probably a really nice dude but let’s face it, he might have created the show but he’s also proven himself to have the least interesting vision for what it should be. Here’s an episode, in fact, that proves that to be true.

Next we get Mulder and Scully in their basement office discussing a variation on that whole belief/disbelief issue that it’s hard to believe they even bother having at this point (I mean, I know I’m supposed to suspend disbelief as a viewer, but is there anyone living in the world of The X-Files who hasn’t had at least an acquaintance kidnapped by aliens or shredded by swamp monsters?). It seems that some folks somewhere have reported hearing celestial trumpets. Is this music from the heavens? Proof of God? The word belief is bandied about, Mulder quotes revelations, and Scully refers to the two of them as the FBI’s least wanted, tagging the quip by mentioning she’s been waiting 23 years to say that.

Enter Miller and Einstein, played by guest stars Robbie Amell and Lauren Ambrose. He’s into spooky stuff, she’s a seriously skeptical doctor, they’re the young, cute, CW version of Mulder and Scully and they’re investigating the suicide bombing, which turns out to have been motivated by a painting in the demolished gallery depicting the Prophet on the toilet. This Miller dude wants Mulder’s advice on the possibility of connecting with the surviving terrorist, who is lingering in a vegetative state, in hopes of gleaning some information about whatever cell he’s a part of and what they’re planning next. These four chat, Miller & Einstein split for Texas, but Mulder and Scully seem intrigued. Scully calls Miller and tells him she has an idea and that she’ll meet him in Texas, Mulder calls Einstein and asks her to hang back and chill with him. Everyone goes along with everything without telling anyone else what they’re doing because this is a TV show.

And then, before the commercial, we cut to a terrorist workshop, bomb parts under construction, reinforcing that the last couple minutes, which played like a cute farce, are set in an episode that opened with a fairly ‘torn from the headlines’ suicide bombing.

At no point in what follows does this episode settle tonally or really make sense, unless what’s happening is that the years of horror and conspiracy thinking have left Mulder and Scully broken and insane.

Take the next scene, where Einstein reminds Mulder that lives are at stake and he smarmily replies, “I’m all about that,” and then launches into a spiel about the doors of perception and whether thoughts have mass and works his way around to revealing his scheme—to gulp magic mushrooms under Agent Einstein’s watch in order tap into other planes of existence in hopes of communicating with the captive terrorist.

I hated that scene so much that I’m not even sure where to begin, or if I should. The conversation and Mulder’s probing questions are such stupid middle school stoner mysticism…Mulder comes off as such a prick, like Californication’s Hank Moody at his most ‘hipper than thou’ loathsome…it’s a nonsense plan for the character to suggest, and lazy on the part of Chris Carter…let’s move on…

…except there’s really nothing to move on to. Scully hooks up with Miller in Texas and tells him her idea has to do with using an MRI to tap into (what’s left of) the terrorist’s brain. I don’t know if this makes any sense because it’s tossed off as though no one at any level of involvement with this episode cares what’s happening in this scene. What matters is that Einstein shows up and spots Scully and Miller at the terrorist’s bedside, and also it’s important that we all disregard that the Miller and Scully and Mulder and Einstein scenes have thus far been intercut, suggesting that they’ve been happening simultaneously, which would mean that Einstein travelled from DC to Texas in about thirty seconds. Also, don’t worry about why seeing Scully in the hospital prompts Einstein to call Mulder and tell him to catch the next flight down. It happens because it has to happen in order to get to the honky tonk freakout.

Yeah, the hony tonk freakout. Mulder’s plan upon arriving at the hospital turns out to amount to nothing more than shrooming in a chair beside the terrorist’s mangled body—which is pretty metal—but pretty quickly he’s rampaging around, vamping and line dancing with babes and bling and and a cameo by the Lone Gunmen.

Remember those guys? How much fun they were? Now they’re shrieking perverts in an idiot’s hallucination.

You get the feeling that Carter and Duchovny had a ton of fun shooting this material but lordy lord, does it not translate. Good heavens does it fall flat, this lifeless, uninspired jab at…something. Texans, I guess. There’s a lot in this episode that seems to be taking jabs at Texans. The cowpokes in the opening, all this garbage in Mulder’s hallucination, there’s the bit with the racist, murderous nurse. I don’t know Carter’s biography but if I found out that as a kid every single resident of San Jose lined up to spit in his face I guess that would make sense, given the vitriol on display here. But it’s not even fun vitriol! It’s so poorly done and clumsy and dim that I caught myself feeling pity for my television screen, forced to project this malarkey.

So he wakes up, finds out that Einstein actually gave him a placebo, and tells her she was in his vision (calls her ‘50 Shades of Bad,’ at which point she should have jammed her thumbs into his eye sockets). Then Mulder spots the terrorist’s mother (he knows her from his vision) and pulls her into her son’s room, where she reveals that she had a dream that her son had second thoughts and didn’t detonate his explosive vest, which is how he’s still kind of alive. Then he dies and the plot kind of resolves when Mulder remembers that during his hallucination the terrorist told him that his pals are holed up at the Babylon Hotel.

Miller and Einstein get a quick scene where they banter as though anyone watching could possibly be invested in them and we end with Mulder and Scully awkwardly pontificating about humanity’s dual propensity for love and hate and how reconciling these extremes is the question of our times—which I agree with, but also I think reconciling this stuff has been a priority since the first caveman bonked the second caveman and took his spot by the fire—and there’s something about the old testament God and something about ‘mother love’ and greater purpose and how maybe what we need to do is develop a common language and holy shit, oh wow, the name of the hotel! The Babylon hotel! That’s a reference! And then there’s something about how we need to act like the prophets of old and open our hearts and listen and then Mulder hears the fucking celestial trumpets from earlier and the camera zooms out and we end looking at Earth floating in space accompanied by The Lumineers howling and I guess we’re supposed to think, WE GOT NO CHOICE BUT TO SHARE THAT BIG BLUE MARBLE but all I felt was THERE ARE PEOPLE ON THAT BIG BLUE MARBLE STARVING AND THE COST OF PRODUCING THIS EPISODE COULD HAVE FED THEM FOR YEARS.

Doing a lighthearted episode about Mulder and Scully chilling with their younger counterparts: good idea. Doing an episode examining Islamic extremism through The X-Files overarching theme of the power of belief: good idea. But mashing these together and cutting from suicide bombers to frivolity and back again just feels gross. And yes, I believe that reconciling love and hate is important, and sure we all need to be open minded, and of course ideas have weight and…and… towards the end Einstein drops a quote of her namesakes, “the most beautiful thing we can experience is the mysterious—the source of all true art and science.” Love it. Very true. But everything else here is either too corny or too preachy or too silly or too dark, and the only mystery I’m pondering now that it’s over is why Chris Carter thought any of it was a good idea. And you can so tell that dude thinks this is an ‘important’ episode, you can tell he thinks this is both the culmination of everything the show was ever meant to be and a declaration of its lasting relevance. But this episode—and The X-Files in general, at this point—seem about as relevant as a Valentine’s day card from an old ex that you find in a box in your attic…once upon a time it made you happy because it was the thought that counted, but now it seems trite and the only reason you don’t throw it away is because you haven’t let go of the past yet. 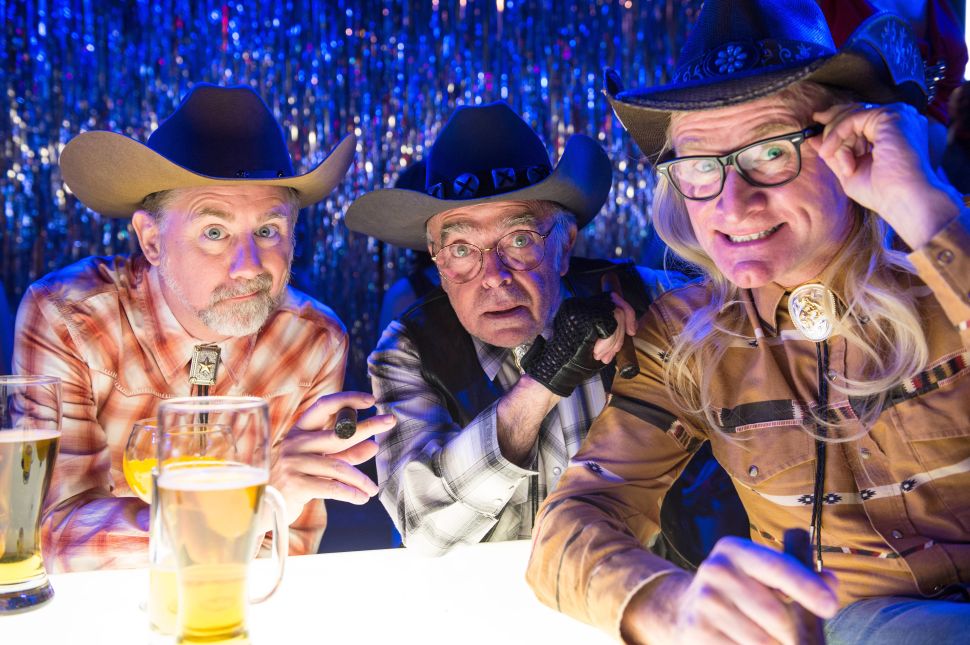