Where to start, when this might be the end? Last week’s episode, “Babylon,” concluded on a charming note, with the lovely strains of The Lumineers’ “Ho Hey.” But the season finale of The X-Files is bleak, like Stephen King’s The Stand bleak. Everyone’s got superflu. We last see Scully and Mulder on a jam-packed bridge, cars parked haphazardly, drivers and passengers dying. It might be the end of the world; maybe it’s just the end of X-Files. Either way, it feels like tragedy. It’s the end, too, of a certain kind of television show.

My love affair with The X-Files began on an old gray couch in a yellow house with white columns in Montclair, New Jersey. This was before Netflix, before you could wear your glasses all weekend, and tear through a bag of Red Hot Blues and a couple seasons of a show you liked. We watched every week on a now-extinct TV (this was long before flat screen) and I was enthralled by the smoldering appeal of Mulder, and delighted by the way Scully’s left eyelid would sometimes close a little bit slower than her right. The writing? Always good, sometimes genius. Dialogue from favorite shows infects everyday life. The X-Files has given me cerulean blue, small potatoes, and wasp man, from the utterly brilliant “X-Cops” episode.  The couch, house, and the companion are gone, and now the world of The X-Files has vanished as well.

I’ve got Mulder’s poster “I Want to Believe” poster on my office wall, and a mantra that made so much sense in the show’s heyday seems incredibly naïve today. Our shows celebrate a sort of grim, knowing sarcasm about everything from aliens to sex. Back in the day, the chemistry between Mulder and Scully was just a faint color that only a shape-shifter like Eddie Van Blundht has a chance of painting. Mulder and Scully were delicate with each other. The show was often frightening, but rarely crude. So it was jarring when Agent Einstein tells Mulder that words and thoughts don’t have weight: “Because when I stand on a scale and think of ice cream, my ass doesn’t grow.” Agent Einstein is Scully’s twin paradox, but she’s not Scully. And while that line is hardly unusual, it’s a sign that there isn’t much room for a show like The X-Files anymore, the kind where a grown man wanted to believe in space men, and we wanted him to be right.

The finale is a Chris Carter specialty, with a van Gogh palette of thick strokes of anti-government chatter, conspiracies, and cool science plots. The episode begins with Scully going over the basics of The X-Files partnership, and we see dozens of photos of the early days (and quite impressive that Dana Scully looks and dresses better now than ever). Then she transforms into an alien – that was awesome.

This episode welcomes back Agents Einstein and Miller, the twin paradoxii, as well as Tad O’Malley, himself the twin of Bill O’Reilly. All are wonderful here – but Mulder is missing. We soon see him bloodied and driving to an unknown spot in South Carolina. When his phone rings, there’s no more X-Files theme, no more in jokes. When a scene begins with a stunning shot of Agent Einstein’s blood being drawn, the joking is over.

With Mulder on a mission, it falls to Scully to take on his role. As O’Malley rants online about alien DNA and a coming plague, it’s Scully who tells Einstein that he’s right, that the craziest conspiracy imaginable is coming true. Scully gets the proof when she meets Monica Reyes (Annabeth Gish, looking terrific), who confirms everything that Scully now believes. Through Reyes, we get our first look at a horribly burned figure, and it’s obvious that sickening person under the pressure garments is Cancer Man. He’s so burnt that he now looks like an actual cigarette.

We see Mulder in a pretty fantastic fight scene (ah yes those Semitic good looks still holding up) and he gets the information that Scully also now knows – that Cancer Man is still pulling the puppet strings. That’s where he’s heading to in Spartanburg, because Cancer Man has created the Spartan virus that has become a global contagion. He’s proud of it, too, telling Mulder, “I just changed the timetable. Everybody dies at the end.” While Mulder heads directly to the source, Scully heads to the hospital.

The alien DNA inside Scully is now what saves her, as everyone without the alien sequence is falling ill. Einstein falls sick as well, and Scully works alone to sequence her DNA using PCR. There were a bunch of other science acronyms and protein cutting happening here, but the upshot is that Scully’s genetic mutation represents a potential cure.

With the population falling ill with different illnesses, it’s on Scully to figure out how to make the vaccine and get to a dying Mulder in time to save him. She manages to find Mulder and Miller on the bridge, driving wildly over sidewalks to get to them, but it’s almost too late. The only real cure for Mulder would be stem cells from their son, William. Just when the situation looks bad, it gets even more dire. A spaceship appears above the bridge, holding Scully in a green beam of light. It’s not the green light, the orgastic future of Great Gatsby – it’s a sign that Cancer Man might win after all. Mulder’s dream of wanting to believe? Well, he was right all along, and the truth that’s out there is terrible. It’s death in a crappy white car on a bridge.

At this point, not even Carter knows if we’ll ever have a resolution to their fate. He said to E! News, “I don’t think it’s it for Mulder and Scully, but I have to say, there’s no guarantee that we’re coming back.” This is an undignified end for Scully and Mulder. Please, please, get them off this bridge. 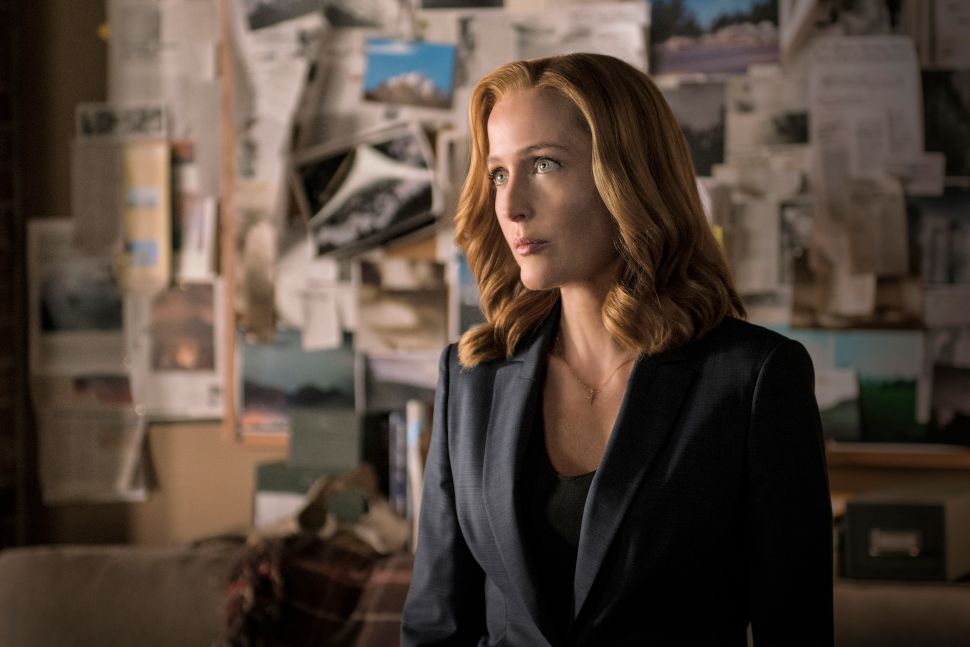