Gary Johnson, unlike some other third party candidates out there, understands he probably won’t be the next president of the United States.

But the former Republican governor of New Mexico, running once again as the Libertarian Party candidate, hopes to be a “voice of reason” in an election season dominated by the theatrics of Donald Trump. Mr. Johnson may seem at least a little unreasonable to both ends of the political spectrum—he’s for gay marriage, drastically slashing the size of government, opposing military interventions abroad, immigration reform, and eventually legalizing just about every drug, marijuana and heroin included—but he sees himself as someone who will end up on the right side of history.

“At the end of the day, when [I’m] breathing [my] last gasps of air on [my] deathbed, I’m gonna be able to say I was the voice of reason in this and there’s a certain satisfaction in that for me,” Mr. Johnson, a millionaire businessman, said in an interview with the Observer. “I make zero money on politics.”

After briefly running in the 2012 Republican primary, Mr. Johnson decided to become the Libertarian Party candidate, finding that his socially liberal views were unwelcome in a GOP tacking hard to the right. He won about 1 percent of the popular vote, a disappointing outcome for him, though he hopes to boost his vote total this time around by appearing in televised debates. Mr. Johnson retained Bruce Fein, a well-known constitutional lawyer, to sue the Commission on Presidential Debates to allow third party candidates on stage with the Republican and Democrat.

Those two candidates, he predicts, will be Mr. Trump, the real estate billionaire who was once an improbable contender, and Hillary Clinton. At this point, both are front-runners for their parties’ nominations.

As the former governor of a border state, Mr. Johnson said Mr. Trump’s call to build a giant wall along the Mexican border is laughable and would cost far too much money, assuming a President Trump couldn’t force the Mexican government to pay for the wall, as he has promised. Mr. Johnson argued immigrants spurred on New Mexico’s economy, and those that came illegally did not take the jobs of American citizens in great numbers.

“I really think that Donald Trump has the opportunity here to really take Republicans down and the Republican Party will no longer be if he’s the nominee,” he said. “Starting out with deporting 11 million illegal immigrants, following that up by building a wall. As a border state governor, I’ll tell you that’s crazy.”

“He also talks about killing the families of Muslim terrorists. Gee, who’s gonna arbitrate over that one? And then he says he’s all about free market and then in the next sentence he says I’m going to force Apple to build their iPads and iPhones in the United States … where do plus half of Republicans go given the things he is saying?”

If Democrats and establishment Republicans are nodding along with Mr. Johnson here, they’ll probably feel a lot less sympathy for his position on drugs. As a fierce opponent on the War on Drugs, Mr. Johnson departs from elected officials on both sides of the aisle by talking openly about a future where all drugs are legal. He wants to focus on marijuana for now, which has been legalized in Colorado and Washington, and eventually work toward a world where substances are no longer underground—and therefore less likely to be abused, in his estimation.

“Would the world be better off if all drugs were legal? Yes. The world would be better off, that 90 percent of the drug problem is prohibition-related, not use related,” he said. “But what I’ve said is, look, let’s legalize marijuana first and when we do that, I think the whole country takes a quantum leap toward understanding substance abuse.”

Mr. Johnson said he had not actively “advocated the legalization of other drugs although would I sign onto to it? Absolutely.”

Pushing too hard for other drugs, he said, could “muddy the ” toward a push for marijuana legalization. “First if you start talking about legalizing all drugs, I think you muddy the for what is a clear path to seeing that happen.”

Mr. Johnson insisted, however, that it’s “prohibition” which “kills.”

“Quality, quantity unknown. Dirty needles. That’s what kills. Prohibition kills,” he said. “Will there still be people who commit suicide using heroin? Of course, just like people will commit suicide doing anything.”

“Heroin, when you compare it to legal, prescription painkillers, is arguably safer,” he added.

He tacked on a disclaimer: “In no way am I advocating heroin use.” 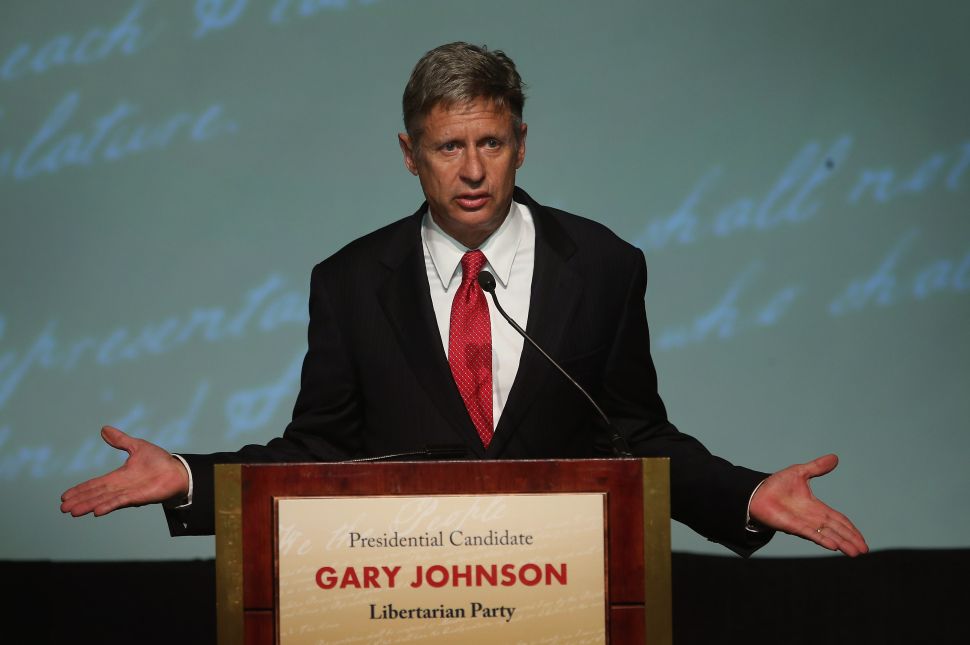