In the gritty, two-fisted, smartly written and tightly directed Standoff, a pair of terrific actors plays a game of violent, psychological cat and mouse in a remote two-story house in the middle of the scenic Canadian farm country. It’s filled with obscene dialogue that cannot be repeated even in a liberal publication like this one, but it keeps you tensed and anxious and never sure of how anything will turn out. You get your money’s worth.

While attending a funeral, a 12-year-old girl watches with horror as a masked man in black approaches, brutally massacres all of the mourners and dumps them into the open grave. When he removes the hood, she photographs the killer’s face from behind a tree—a face that belongs to an anonymous hit man played by Laurence Fishburne, who specializes in killing vicious thugs with great panache. Desperate to retrieve the film in her camera and eliminate his only witness, the assassin pursues the hysterical child to a house in the middle of a field that belongs to an anguished war veteran named Carter Greene, played by stalwart action hero Thomas Jane, who is more than a match for any monster. Carter and the anonymous assassin are both wounded in a round of gunfire, and Carter finds himself in the strange, unexpected position of protecting a child he doesn’t even know. What the killer doesn’t know is that his adversary is doing it with a 12-gauge shotgun with only one shell left. For the rest of this rugged tale of shrewd survival under fire, played out on two different floors of the house, the injured men stage a battle of cat and mouse well calculated to keep you on the edge of your seat. Nobody is allowed to fall asleep, including the audience.

As the plot progresses, writer-director Adam Alleca, a craftsman worth keeping an eye on, slowly builds enough character revelations to keep us interested in both men. Carter is a broken and lonely man, deserted by his wife and drinking himself to death out of guilt after causing the accidental death of their son. Acting as surrogate father to the little girl whose life depends on him offers a chance for redemption. And despite the hired hit man’s cold-blooded passion for violence, destruction and homicide, he has a surprising sense of humor that makes him fascinating. Both men are war veterans of a Gulf War that shaped their characters in ways that give them something in common. “Life ain’t nothin’ but one big F-ing pissing contest,” is the killer’s crude way of summing up the situation in plain English, and he’s determined to be the last man standing. Meanwhile, into the fray wanders a young cop with bad timing and Carter’s estranged wife, both of whom face a fate worse than death.

Nobody is allowed to fall asleep, including the audience.

Among the occasional gaps in the story, we never do learn why the professional killer has been hired to knock off the victims at the opening funeral, but Thomas Jane is a riveting hero, Ella Ballentine lends solid support as the child he risks his life to save, and Laurence Fishburne’s articulate philosophy (“He who makes a beast of himself loses the pain of being a man”) makes him an unusual villain you end up caring about, whether you like him or not. The high quality of the acting in Standoff is a big help, and it’s extremely well shot by cinematographer Zoran Popovic, who makes good use of light and shadow. As Canadian films go, this is one of the winners. 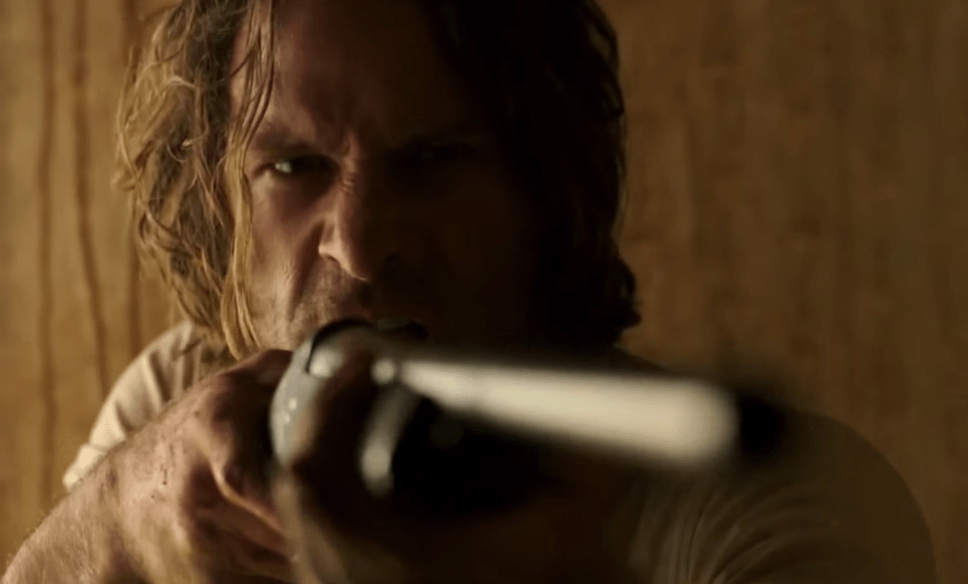