“That’s why nobody likes him,” Mr. Trump said, noting that none of the other 99 members of the Senate have endorsed their colleague, Mr. Cruz, for the Republican presidential nomination.

A camera glimpsed Mr. Stephanopoulos smiling mischievously as he looked down at the speaker phone.

“Any senators endorsed you yet?” he asked Mr. Trump, the Republican poll leader, on the eve of the Iowa caucuses.

“They will, very soon,” Mr. Trump said, adding that he’s been endorsed by Jerry Falwell, Jr., Sarah Palin and “Sheriff Joe from Arizona,” as if this Larry, Moe and Curley trio enjoyed the same stature as George Washington, Thomas Jefferson and James Madison.

‘The Democratic party has become aggressively populist. It is not ashamed of the term`Socialist.’ It is making me nervous.’

As for health care, “I have a heart,” Mr. Trump said, adding that he would not let people without insurance die in the streets. As for Mr. Cruz, Mr. Trump said: “Maybe he’s got no heart.”

So went the gentle banter on the eve of the first voter involvement of the 2016 Presidential campaign to select a new president on November 8.

If you watched the current-affairs shows Sunday (it’s a dirty job, but someone has to do it) it was a little reminiscent of the week of hype that precedes the Super Bowl. Except the Super Bowl ends the football season next Sunday while the Iowa caucuses represent opening day of a nine-month gestation period.

For television news junkies who crave this sort of thing, it was a treat to see Brian Williams and Rachel Maddow on MSNBC past midnight, instead of that channel’s usual weekend fare of guys with scars and tattoos talking tough from behind cell bars.

“I feel butterflies in the locker room,” said MSNBC’s Chris Matthews, the savvy and emotional Democrat. Noting that Mr. Trump is thrice-married, a casino operator and “a hot shot from the Big Apple,” Mr. Matthews marveled that such a man would be favored in the right-wing party in a conservative place like Iowa.

“It’s an extraordinary shift in the tectonic plates of the Republican party,” Mr. Matthews said, shortly before midnight. “The Democratic party has become aggressively populist. It is not ashamed of the term`Socialist.’ It is making me nervous”

That would be a reference to Bernie Sanders, the socialist-independent-sort-of-Democratic Senator from Vermont who may give Hillary Clinton a close call on the Democratic side.

‘The media has done some malpractice. His ideas are not radical. A lot of the media has tried to marginalize him.’

Mr. Sanders and Mr. Trump have very different styles but both appeal to the growing portion of the population who feel the American economic system is rigged and in need of major change. Some are surprised at Mr. Sanders’ popularity but that group does not include editor editor Katrina vanden Heuvel of The Nation, which endorsed Mr. Sanders.

“He’s an unreconstructed New Dealer,” she said on ABC, meaning it as high praise. “The media has done some malpractice. His ideas are not radical. A lot of the media has tried to marginalize him.”

This sparked a lively exchange between Ms. vanden Heuvel and Alex Castellanos, who sees things from a Republican point of view.

CASTELLANOS: “A country, a company, that’s already been bankrupted by those ideas . . . “

The Republican Party, she said: “Is engaged in a suicide pact with its own party.”

‘That is the soul of Bernie Sanders’ message: that the capitalist system is rigged and the billionaire class is a bunch of pirates.’

When Donna Brazile said “Ted Cruz peaked too soon,,” Mr. Castellanos said this might mean the possible two Republican finalists would be Mr. Cruz and Mr. Trump. “A dark Republican Party and a nativist Republican party,” he said.

HAND ME THE REMOTE

FOX NEWS SUNDAY: Host Chris Wallace laid it on a bit thick when he explained to his audience why only Republican candidates appear on Fox News Sunday. “We invite Hillary Clinton and Bernie Sanders every week,” Mr. Wallace said. “And every week, they turn us down.” …Later in the show, Brit Hume said of Ms. Clinton: “If something happens that makes us think she is seriously likely to be indicted—or is indicted—obviously that would change everything.” Then Mr. Hume sniffed that “67 percent of Democrats said the system is rigged and screws the little guy. That is the soul of Bernie Sanders’ message: that the capitalist system is rigged and the billionaire class is a bunch of pirates.” Des Moines columnist Kathie Obradovich quickly added perspective. “That also characterizes Donald Trump’s supporters,” she said. “All Republican demographics say the system’s working fine except pretty much for Donald Trump’s supporters.” …Mr. Cruz and Mr. Wallace continued their chippy exchanges so evident in last week’s debate. When Mr. Wallace charged Mr. Cruz with changing the subject on a tough question, Mr. Cruz snapped “Chris, don’t interrupt me.” Mr. Wallace had demonstrated flawed facts presented by Mr. Cruz regarding the economy.

MEET THE PRESS: Mr. Cruz, courting the evangelicals, was in a turn-the-other-cheek mood when he talked with host Chuck Todd on NBC about all the nasty things Mr. Trump says about him. “When Donald Trump calls me a Canadian anchor baby, I don’t respond with insult,” Mr. Cruz said. “In fact, I’ll sing Donald’s praise. I like Donald. I think he’s bold and brash. Now, I think his policies are liberal.” …Joy-Ann Reid, a national correspondent, said Mr. Sanders is backed by Democrats disappointed that President Obama did not provide a public option on health insurance and did not prosecute Wall Street wheeler-dealers for the crash of the economy of 2008 …Senator Rand Paul of Kentucky—still a candidate—stopped by to say rival candidate Governor Chris Christie of New Jersey is “Bragging about shooting down Russian jets.” Mr. Paul said that’s naïve. “That will lead to more problems and not make the world safer.”…Of Mr. Cruz’s warlike rhetoric, Mr. Paul said, “We don’t want to make the sand glow. We don’t want to carpet-bomb the Middle East. If you have indiscriminate bombing over there, you may create more terrorists than you kill.”

THIS WEEK: Mr. Stephanopoulos asked Ms. Clinton about the 22 emails the government is holding back from public view in the investigation of Ms. Clinton’s mail server when she was Secretary of State. “I do want them released,” Ms. Clinton said. “They can and should be disclosed . . . This is very much like Benghazi, George. The Republicans are going to use it, beat up on me. I understand. That’s the way they are.” Mr. Sanders, who said long ago he would not make an issue of the disputed emails, reacted to the latest development. “There is a legal process underway right now and I’m not going to politicize that issue.” …During the panel discussion, Matthew Dowd said of Mr. Trump: “When he pulls out a victory in Iowa, there is going to be a sonic boom around the country.” …Speaking of the Republican leader in the polls, Ms. vanden Heuvel said “Donald Trump is in sync with right-wing populism that we’re seeing around this world.” …Referring to Mr. Trump’s boycott of the last Fox News debate, Mr. Castellanos said “Fox News is the most powerful organ in the Republican Party” and Mr. Trump took them on. When Donna Brazile said “Ted Cruz peaked too soon,” Mr. Castellanos said the possible two Republican finalists—Mr. Cruz and Mr. Trump—would mean “A dark Republican Party and a nativist Republican party.”

FACE THE NATION: Host John Dickerson of CBS is among the better interviewers and did his best to get Mr. Trump to show a little introspection. He asked about the sermon on humility that Mr. Trump heard when he attended church the previous Sunday. “There’s more humility than you would think, believe me,” Mr. Trump said of himself. “We’re all going to the same place—probably one of two places.” …In the panel discussion, Ben Domenech of The Federalist said part of Mr. Trump’s appeal is “the sense that he is a traitor to his class. That makes him very effective. That makes him powerful… But it’s also a sign of a situation where the Republican party has failed to address the fact that they are out of step with a significant portion of the voting electorate.” …Mr. Domenech also observed of Mr. Sanders: “It became OK to be a Democratic Socialist. Something has changed in America.” …Kim Strassel of The Wall Street Journal on Ms. Clinton: “Hillary Clinton is going into Iowa and her closing argument is `We’re pretty confident there might not be an indictment.’”

STATE OF THE UNION: Jake Tapper seemed to have had a second cup of coffee at the top of his show on CNN. He spoke excitedly of “this wild, whacky election season.” …In that Mr. Sanders and Ms. Clinton will add more debates to the schedule, Mr. Sanders said he would be glad to stage one in Flint, Michigan, where the drinking was accidentally poisoned by decisions of the staff of Governor Rick Snyder. Mr. Sanders said that debate should be before the Michigan primary on March 8 …Mr. Cruz continued his charm offensive against Mr. Trump when interviewed on a bus by Jake Tapper. “I will give him credit,” Mr. Cruz said. “When he insults someone, it is always memorable and colorful. I like Donald. I will continue to praise him as bold and brash. The American people deserve more than just a battle of petty insults. I don’t intend to play that game.” 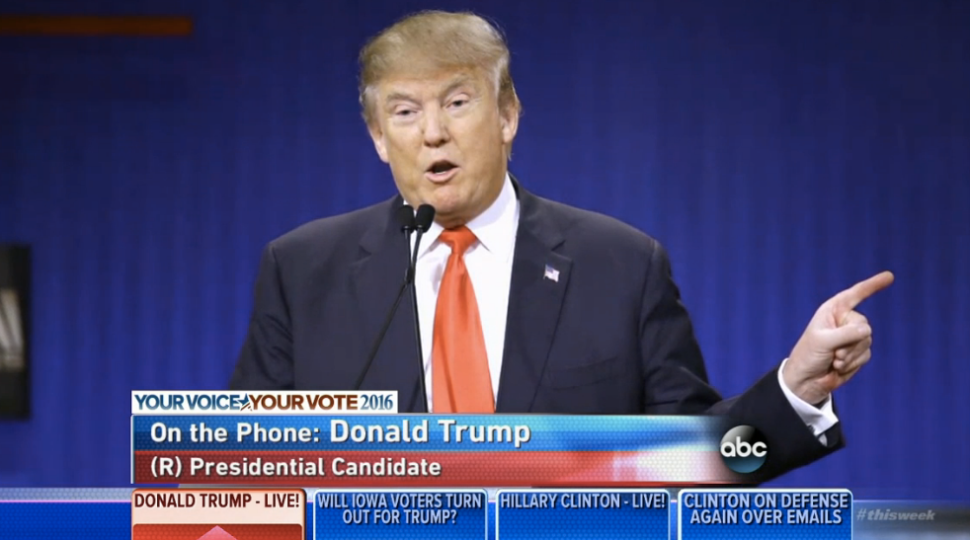