When news broke that Supreme Court Justice Antonin Scalia had died suddenly at the age of 79, Twitter was filled with the customary stream of condolence tweets that follow the loss of any public figure.

Because of Scalia’s conservative record, however, many of the social media missives had a political bent. Republican congressmen and presidential candidates paid tribute to the justice, while at the same time stating that his replacement should not be named until after the presidential election:

Justice Scalia was an American hero. We owe it to him, & the Nation, for the Senate to ensure that the next President names his replacement.

Jeanette & I mourn the loss of Justice Scalia, and our thoughts & prayers are with his wife Maureen & his family. pic.twitter.com/e03KRZRM6q

My statement on the passing of Judge Scalia. pic.twitter.com/4JSmbKWzDy

On the Democratic side, Sen. Bernie Sanders did not take a position on Scalia’s successor, simply calling the justice “brilliant, colorful and outspoken.”  However, Hillary Clinton took Republicans to task for suggesting that a Supreme Court seat remain vacant for a year. Senator Harry Reid, the Senate’s Democratic leader, took a similar view in a series of tweets:

Justice Scalia was a brilliant man. We had many differences, but he was a dedicated public servant.

The President can and should send the Senate a nominee right away. The Senate has a responsibility to fill vacancies as soon as possible.

Would be unprecedented in recent history for SCOTUS to go year with vacancy. And shameful abdication of our constitutional responsibility.

There were few open tributes to Scalia outside of the political realm—most of the commentary about him from regular Twitter users consisted of quiet condemnations of his rulings. The more open vitriol was directed at the Republican lawmakers who suggested leaving the seat vacant:

Just heard the news. Will now honor a precept taught to me in childhood.

On the other hand: Any tears I shed tonight will be for the uncountable numbers of Americans hurt by his decisions. Yours may vary.

It would be easier not to "politicize someone's death" if they didn't hold a position with a lifetime appointment.

Kind of ironic that some Republicans want to re-write the Appointments Clause as a way of getting another originalist on the Supreme Court.

If this were the last year of a Republican president's term and the Democrats were pledging to obstruct SCOTUS confirmation—can you imagine?

I like when the ppl praising Scalia's devotion to the constitution also demand POTUS not be allowed to appoint a replacement.

For morons suggesting the Senate holds off until the next president, there’s almost an ENTIRE YEAR before that happens. Get real.

As a friend put it: "Apparently, the GOP thinks that Black Presidents only get 3/5ths a term."

Of course, there were several people who fantasized about the nominee President Barack Obama would eventually put forward:

Can Obama nominate himself?

For his part, Mr. Obama said in a statement tonight that the Senate should give his eventual nominee “a fair hearing and a timely vote.” 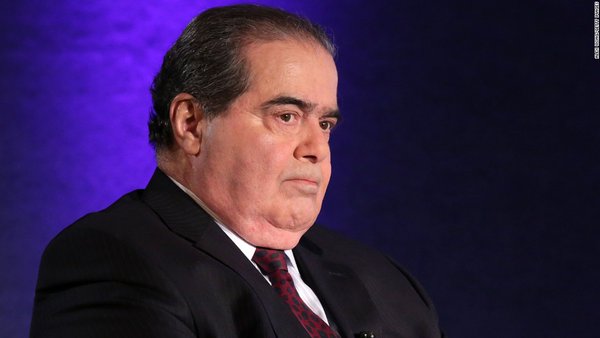