In May 2009, Palestinian President Mahmoud Abbas was in Washington, preparing to meet the new American President, Barack Obama.  Nine years earlier Mr. Abbas’ boss, Yasser Arafat, rejected an offer for the very Palestinian state that Palestinians claim they seek. The deal Mr. Arafat rejected would have given Palestinians an independent state on roughly 95 percent of the West Bank, all of the Gaza Strip and a capital in East Jerusalem. All Mr. Arafat had to do was renounce conflict with Israel—which he was unwilling to do.

Instead, he opted to launch a four-year bombing campaign in which young Palestinians were used to blow some 1,100 Israeli civilians to pieces—a campaign that boomeranged badly. The Israelis’ response, aimed at stopping the killing wave, resulted in several thousand Palestinian deaths and shattered the Palestinian economy. The harm Palestinians did to Israel and to themselves only ended with Mr. Arafat’s death in 2004, when Mr. Abbas, hailed by the western media as a moderate, took Mr. Arafat’s place.

Sitting in Washington, Mr. Abbas and his advisers sensed that the new president bought into their narrative of Palestinians as victims and of Israelis as victimizers. Only months before, Mr. Abbas had himself spurned an Israeli offer for a Palestinian state that was even more far-reaching than that rejected by Mr. Arafat, extending his middle finger to the Israelis and announcing that not only would he not accept their offer but that he would not even negotiate. Instead, Mr. Abbas told The Washington Post, he preferred to sit back and wait—while an Administration that embraced the Palestinians and scorned Israel squeezed Jerusalem, derided its Prime Minister and ostentatiously distanced the United States from its ostensible ally. Mr. Abbas was in no hurry. “In the West Bank,” he said, “we have a good reality… the people are living a normal life.”

Mr. Abbas has spent the Obama years contentedly refusing to negotiate with Israel, spearheading efforts to isolate her and, lately, encouraging young Palestinians to stab Israelis to death. The “good reality” that Palestinians enjoy has been—to a significant extent—bought and paid for by American taxpayers, who cough up several hundred millions of dollars a year to keep Mr. Abbas and his Palestinian Authority in power. For their part, the Palestinians know they have Americans by the short hairs, forced to either pay vast sums of taxpayers’ dollars to an enterprise which incites violence and wastes and pilfers funds intended to reach the population, or withhold those dollars and watch while the Authority collapses and Hamas take over. Mr. Abbas knows Americans will continue to indulge the former, because they cannot permit the latter.

This is what Mideast analyst Jonathan Schanzer describes as “a strategic patience on the part of the Palestinian elite,” borne of a confidence that Europe can be counted upon to treat the Palestinians with kid gloves no matter what they do—and that the United States, as long as Obama is President, will largely do the same.

Mr. Schanzer is the 43-year-old Vice President of the Foundation for Defense of Democracies, a Washington think-tank whose ability to punch above its weight was on display during the debates over Iran that consumed much of the capital’s oxygen over the last several years. Its analysts are routinely asked to testify in Congress, speak on panels and appear on television because they combine two qualities not usually found in the same person: a scholarly grounding in complex Middle East issues and the ability to administer the verbal frying pan to the head in ways that expose, frequently devastatingly, inanity and cant.

In an arena in which defenders of the Palestinian Authority and indulgers of Hamas are numerous, well-funded and relentless, Mr. Schanzer’s credentials are tough to challenge. He has a Master’s Degree in Middle Eastern studies, holds a PhD from Kings College, knows Arabic and lived in Jerusalem between 1998 and 2001. His time there straddled two very different periods: a time of hope in Israel that the Clinton Administration could pull off a permanent peace deal, and then, in the fall of 2000, the start of the Palestinian bombing campaign that left body parts strewn across the Jewish state. He returned to the United States on September 8, 2001, days before al-Qaeda’s attacks illustrated vividly for Americans the kind of barbarism to which Israel is subjected on a constant basis. “It was just an incredibly strange moment to come back,” Mr. Schanzer says.

Mr. Schanzer was a Research Fellow at the Washington Institute for Near East Policy before joining the Treasury Department’s Office of Intelligence from 2004 until 2007. His book, Hamas vs. Fatah: The Struggle For Palestine, forced some to confront the uncomfortable fact that the deadly civil war between Hamas, in control of Gaza, and Fatah, which runs the West Bank, ensures that even if Israel and Mr. Abbas could come to terms, there would be no peace. This remains just one of the elephants in the room when it comes to the Palestinian-Israeli conflict, dominating in its importance but regarded as unfashionable by those determined to blame Israel for the conflict’s intractability. As long as Hamas controls Gaza, Mr. Schanzer points out, there is no 2-state solution but at best a 3-state non-solution, in which Hamas seeks to annihilate both Israel and the Palestinian Authority. “When people talk about the two-state solution I’m rather amazed,” Mr. Schanzer says, “because the reality is a three-state solution that is no solution at all.”

Among certain Washington elites, particularly ones that take their cues from the Obama White House, there is precious little appetite for acknowledging this reality, let alone confronting it. “The assumption is that a viable West Bank will somehow be able to bring an Iranian-backed Hamas into the fold [to make peace with Israel],” one that Mr. Schanzer finds “laughable,” noting that “the State Department does not want to address this.”

The other similarly-sized elephant in the room, when it comes to discussing the Palestinian-Israeli conflict, is the Palestinian Authority’s endemic corruption and mismanagement, which has sucked up huge amounts of donor aid, international relief and Palestinian taxes that are supposed to be used to help Palestinians build the infrastructure of a future state, but instead get wasted or stolen. Mr. Schanzer’s 2013 book State of Failure: Yasser Arafat, Mahmoud Abbas and the Unmaking of the Palestinian State traces the Palestinians’ refusal to use the truly massive amounts of money that have been handed over to them to build transparent, effective institutions that serve the Palestinian people and could form as the framework for a well-functioning state.

Mr. Schanzer writes and speaks widely and forcefully on Washington’s penchant for looking the other way when it comes to Palestinian corruption, even though it is to a great extent American resources that are being diverted by the Palestinian Authority, and even though a dysfunctional Palestinian government makes the hope of a 2-state solution even more remote. “If you’re serious about Palestinian independence, the last thing you should want is to indulge the status quo,” he says, “because the status quo is incompatible with a Palestinian state.” Seven years of an Obama Administration that entered office embracing the Palestinian line and refusing to be confused by the facts have profoundly affected the way some in the Democratic Party look at the conflict, says Mr. Schanzer, who cites “the environment, the orthodoxy and the dogma” on the left as extremely unhelpful.

Among those who have targeted Mr. Schanzer for his work is Mr. Abbas’ son, Yasser Abbas, who sued Mr. Schanzer for defamation over a 2012 article raising questions about the Abbas family’s controversial finances, and whether it has benefitted from American taxpayer-funded projects. A federal court threw out Mr. Abbas’ lawsuit, but Mr. Schanzer’s work has clearly become noticed by the Palestinians and their supporters, some of whom do not take kindly to it.

Mr. Schanzer is undeterred, insisting that regardless of how inhospitable an environment it is in certain quarters to shine a spotlight on the Palestinian Authority and on Hamas, the research get done and the facts get published. His finely-tuned sense of humor serves him well, as does the straightforwardness of his mission. “I try to point out stuff that is obvious but which no one is talking about,” Mr. Schanzer says, knowing that, in the case of the Palestinian-Israeli conflict, he has a large amount of material with which to work. 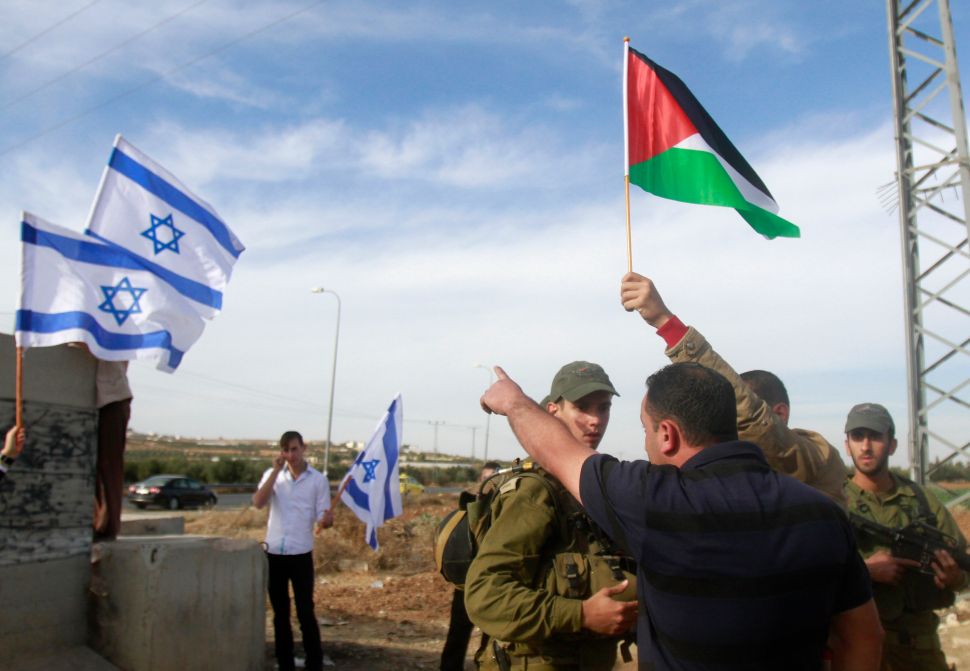