Video of yesterday’s attack on leading Russian oppositionist Mikhail Kasyanov that took place in one of the chic restaurants in the center of Moscow has suddenly appeared on YouTube.

At least three Chechens wearing black trenchcoats surrounded the leader of anti-Putin opposition movement, one of them hitting him in the face with a cake. The voice is heard shouting, “Shame of Russia! Shame of Russian Federation! Kasyanov, shut up! Shame on you! Shut up! Shut up next time! Kasyanov! American agent! Putin will cut into pieces all those who [inaudible] on your side! Kasyanov! America [anaudible]!”

Obviously shaken, Mr. Kasyanov made a feeble attempt to protect himself, throwing a napkin at the offender and saying to him, “Get out of here.”

Laughing, the offenders left the restaurant.

Mikhail Kasyanov recently received what was universally interpreted as a direct threat from Chechnya leader Ramzan Kadyrov who put a photo of Kasyanov framed within the sniper rifle sight on his Instagram page. 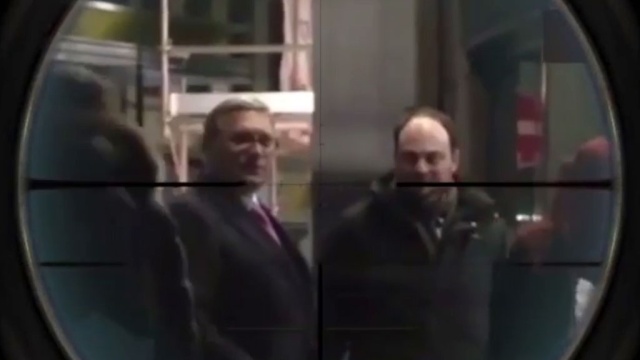