This might be a painfully obvious observation about a show set in 1973, but HBO’s Vinyl is all about the past. Richie Finestra is haunted by his (remember when a MURDER happened?), Lester Grimes’s is a constantly trailing shadow, and Devon Finestra is doing her best to ignore hers. Even more than that pisode three, “Whispered Secrets,” concerned itself heavily with the idea–and the fear–of being stuck like, say, a broken record while the future passes you by.

If you want an example, look no further than the two elderly men, mocking the young DJ named Clive for switching the tracks on his turntable only seconds into a song. “Let the songs play, son,” the old guard says. “You got a mothafuckin’ train to catch?” The young DJ could listen, could do things the way they’ve always been done. But–spoiler alert–he doesn’t. Clive Campbell, better known as DJ Kook Herc, kept doing his thing and basically laid the blueprint for hip-hop in the process.

That’s the feeling we get in the early goings of Vinyl; that something is right there on the horizon. Hip hop is being born, punk is just getting angry, and a band called The Nasty Bits that can’t even string four chords together without smashing at least one amp is the next big thing? As a young folk-prophet said just ten years prior, the times they are a’changing.

I love the dead before they rise
No farewells, no goodbyes
I never knew your rotting face
While friends and lovers mourn your silly grave
-Alice Cooper, “I Love The Dead“

If you’re going to make a show that practically bathes in the mythology of rock and roll, there’s really no better character to bring aboard than Alice Cooper. Not only did this dude actually bring his snake with him when he golfed, it’s something he’s still doing at the age of 67. So I totally buy into the fact that Alice Cooper devised a days-long, incredibly elaborate ruse just to fuck with an A&R man who happens to work for Richie Finestra. No one stands up the godfather of shock rock.

But if anything, this entire subplot brings to light the question: Is Richie’s newfound quest to find the next big thing genuine, or still just the hangover from falling hard off the wagon? And would Richie even know the next big thing if it was right in front of him? Because if something screamed “new,” in 1973 it was the crazy eye-liner wearing bastard that was decapitating himself onstage twice a night. And Richie had him, eye-liner and all, and then left him stranded in his office’s waiting room.

But then there’s Richie’s first and possibly greatest find, the man with the broken voice, Lester Grimes.

As more critics and viewers alike jump from the rocking ship of Vinyl, I struggle to describe why I’m still on board so hard, mostly because there’s only so many ways you can say “I really enjoy watching Ray Romano do drugs and curse.” But if you’re struggling to find any actual emotional core to Vinyl, look no further than Lester Grimes.

How depressing was Grimes, alone in his sad apartment, trying his hand at Zeppelin-swiped blues staple “I Can’t Quit You, Baby?” We get glimpses of the Lester that could have been, the one with the breath-stopping blues voice, the one who could have ridden this wave of change with Richie if being in Richie’s orbit didn’t result in a crushed throat and even more crushed dreams. The most tragic part is that sung to a former lover, “I Can’t Quit You” is a letter to a love you might be able to regain. But Lester is singing to the music itself, a relationship he can’t physically rekindle.

Remember, though, Lester is the one who says to Clive Campbell “I don’t know that you’re making anything, but I do know that you’re trying.” Lester may seem stuck in the past but he’s not a card-carrying member of the old guard, maybe even less so than Richie himself. Lester knows change when he sees it, even if he himself can’t give that change a voice.

I am your main man if you’re looking for trouble
I take no lip no ones tougher than me
I’d kick your face you’d soon be seeing double
Hey little girl, keep your hands off me
-Thin Lizzy, “The Rocker“

The Nasty Bits as a band are basically a stand-in for Vinyl itself. Clean the Nasty Bits up, give them a simple Kings song to yawn through and they lose everything. When Vinyl goes for the plot points that seem mandatory, I check out. It’s insane how tacked on the murder of Buck Rogers feels half the time, and until now hasn’t really had much of an effect on the storyline. It’s an afterthought, a mark on the checklist that the producers felt they needed because the music might not hold the audience’s attention by itself.

I’ve never been compared to Juno Temple, personally, but I feel like Jamie Vine half the time trying to compliment Vinyl. Because Vinyl is far from perfect–the aforementioned murder plot, it’s complete inability to do anything interesting with the brilliant Olivia Wilde–and it’s barely interesting when it paints inside the numbers.

But fuck it, throw a bottle and rile it up and when this show is running on just pure tongue-in-cheek recklessness it at least gives you a temporary jolt. I love Max Casella’s Julie Silver as the character with all of Richie’s vices but none of his genuine drive, especially paired against Jamie. Julie doesn’t get it. Julie would hate DJ Herc constantly changing the track, would tell probably tell him to spin some Donnie Osmond to practice. But Jamie gets that it’s not the notes you play necessarily but how you play them. In the end she wins, and the Nasty Bits are signed to American Century.

I don’t know if Vinyl is making anything, but I do know it’s trying. 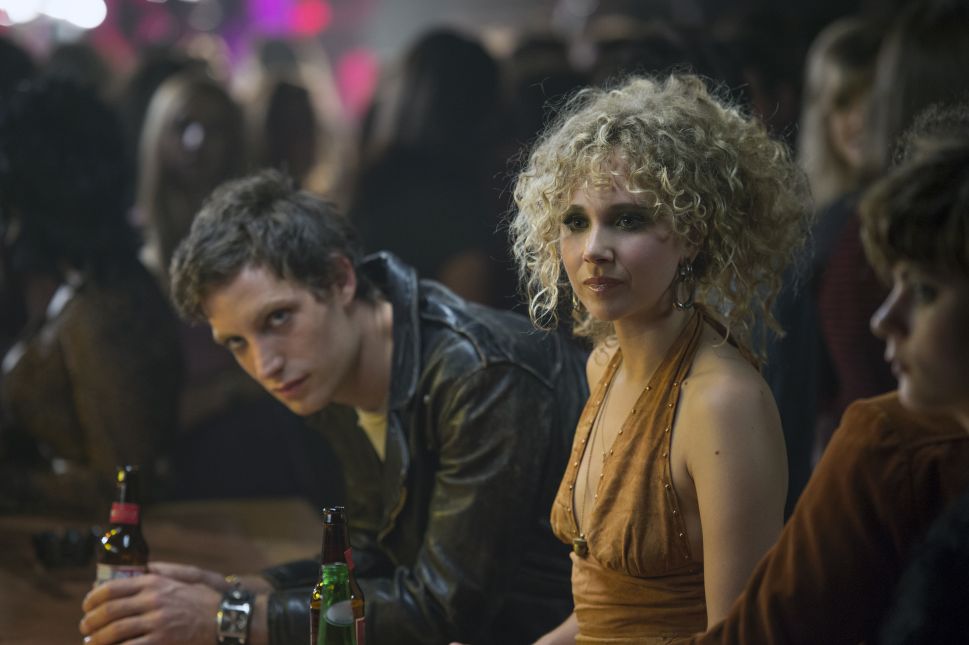