If music truly is a drug, then HBO’s Vinyl–from executive-producers Martin Scorsese, Mick Jagger, and Terence Winter–is a needle straight to the vein, a line right up the nose, an inhale of smoke directly into your lungs. The two-hour premiere, directed to a bar-floor sheen by Mr. Scorsese himself, crackles and pops throughout like the first seconds of your favorite record, before it eventually crescendos into explosive madness–and we haven’t even turned over to side B yet. Vinyl is infused with music, with drugs, and has the effect of both. So dust off the turntables in your closet–or at the very least keep Shazam open–and settle in. Let’s get fucking high.

Personality crisis, you got it while it was hot
But now frustration and heartache is what you got
-New York Dolls, “Personality Crisis“

You expect from the start for Vinyl be music heavy, and it is, once it gets going. But it’s surprising–and surprisingly appropriate, we soon learn–that we open instead in near-silence, our only soundtrack the sound of Bobby Canavale’s record-executive Richie Finestra gasping in his car, looking to score in a dark back-alley. Like I said, something Vinyl handles deftly is the euphoric, drug-like quality of music, as addictive as any amphetamine. Not a second after Richie snorts a line cut with a homicide detective’s card off his own broken rear-view mirror does a crowd swarm the back-alley, headed toward a high all their own–The New York Dolls are playing in the Village and they’re about to literally tear the house down.

Hey, nobody said the 1970s-set HBO show from a Rolling Stone and Martin Scorsese was going to be subtle. But man is it electric.

And what an appropriate song for the Dolls to be tearing through as a dazed Richie stumbles into the crowd: “Personality Crisis.” Everything about Richie’s persona is in crisis, as we find him on the cusp of selling his life’s works, American Century Records. It’s easy, of course, to accept Richie as he’s presented to us, as he presents himself. As head of American Century, Richie has all the bluster you’d expect from a Scorsese narrator–the flashy suits, the money, the not-so-legal business strategies, the grandiose statements. “The story will be clouded by dead brain cells, self aggrandizement and some bullshit,” he tells us, “but how could it not be, this fucking life?”

But this Richie Finestra, the one who towers over American Century’s young A&R team and inserts artist-screwing fine print into contracts, almost seems to be a mask. A mask to cover up a Richie Finestra that started down this path not because of money but because of an uncanny ear and deep-seeded love for music, the Richie Finestra who, as a boy, used a broomstick as a guitar to play along with Chuck Berry.

A good portion of the premiere deals with American Century’s attempt, and failure, to sign Led Zeppelin to a deal. We see the surface-level Richie as he tries to worm his way into the good graces of the band behind their manager’s back. But then Zeppelin take the stage and Richie’s mask comes off. He cries watching Robert Plant perform, looking at the Zep front-man the way an addict looks at a hit he can’t afford.

Can I explain to you?
Everything is going wrong
I`ve lost everything I had
I have to sing this sad song
-Otis Redding, “Mr. Pitiful“

We get a larger glimpse at the real Richie Finestra through flashbacks, to a time before he owned his own record company, his hair was neatly combed and his shirts were tucked in and buttoned. He was just a bartender until his first client strode up the the bar’s microphone–Lester Grimes.

Ato Essandoh plays Lester with such wonderful naivety and earnestness, because probably more than any other character, even Richie, Lester is all about the music. No politicking and no back-room backstabbing, Lester just wants to sing, and not that Chubby Checker bullshit either. He wants to sing the blues. So of course he’ll trust a young, hungry Richie to be his manager, and of course he’ll cut some pop hits for Maury Gold (the always great Paul Ben-Victor) to get his name–or, the name Little Jimmy Little–out there.

These flashbacks are a study in the way Richie is pulled in a number of different directions–on one side is his own label and more money than he’s seen in his life, and on the other, Lester, a friend and musician that put him in that spot to begin with. But, “musicians aren’t your friends,” Maury tells Richie, and its a lesson he takes to heart, along with the $150,000 necessary to start his own label, leaving Little Jimmy Little in the employ of a debt-ridden manager and the crime boss funding his business.

Without Richie, all Lester has is that golden voice, and even that seems to be gone, courtesy of a baseball bat to the throat. How pitiful is it that as Richie ascended to such heights, Lester is left unable to sing–the hits, the blues, or anything? And how tragically ironic is it that when Richie and Lester come face-to-face in present day, through the window of Richie’s limo no less, Rare Earth’s “I Just Want to Celebrate” blares in the background?

Sometimes I wonder, what I’m a gonna’ do
Lord there ain’t no cure for the summertime blues
-Blue Cheer, “Summertime Blues“

Like any great band, the dynamic frontman is only as successful as the cast behind him, and Vinyl‘s supporting cast fills the show out and–mostly in the case of soon-to-be-sold American Century’s eclectic staff–keeps it surprisingly funny all the way through. Richie’s inner-circle–Zak Yankovitch (Ray Romano), Julie Silver (Max Casellar), and Scott Levitz (P.J. Byrne)–act like Mad Men‘s best recurring employee’s worked at Channel 4 with the cast of Anchorman (trust me, that’s a compliment). No half-hour sitcom has elicited a more genuine laugh from me than the one I got from watching Romano’s Yankovitch attempt to salvage the bagels Led Zeppelin’s enraged manager threw on to the floor.

Juno Temple is suitably wide-eyed and ambitious as Jamie Vine, the office sandwich-and-drug girl, a lofty position if I’ve ever heard one. Her “courtship” of The Nasty Bits–who we’re to believe are about to invent punk rock because they suck at live shows?–is the one area Vinyl’s blunt-force story-telling is a little too blunt. “That’ll be your thing,” she tells Nasty Bits singer Kip Stevens. “Not giving a fuck.” As if the swinging a bass guitar into an audience member’s face didn’t drive that point home deep enough.

(Also, if you, like me, found yourself saying “holy shit Kip Stevens is basically young Mick Jagger,” that’s because he actually is)

But honestly, and I can’t believe I’m saying this in 2016, episode MVP goes to none other than Andrew Dice Clay, as the orgy-organizing, drug-guzzling radio DJ Frank “Buck” Rogers, who is threatening an American Century-wide boycott over an appearance mishap involving “Donny fucking Osmond.”

That scene when Richie travels to talk to Buck, who at this point is in the middle of a two days and counting long bender, felt like every Scorsese trope and touch balled into 10-odd minutes. Which, I could see no being for everyone, as I could see Vinyl not being for everyone, but at this point in the show if you were riding the right high this felt like the epitome of out-of-control cool. (Buck shooting the screen playing Frankenstein the moment the monster tumbled to the ground? Loved it).

And of course, because we’re talking Scorsese here, someone needed to have their skull caved in and body dumped out in a swamp. A coked out, belligerent Buck is Vinyl‘s first casualty, bludgeoned to death by a defensive Richie. Where does a man turn when he’s dealing with both the stress of selling his life’s work and murder? Well the music, his usual drug of choice, has run out, so Richie turns to the harder stuff, AKA a bottle of whiskey and the steely, disapproving gaze of his wife Devon (Olivia Wilde).

And just when Richie’s at his lowest, when we come full circle to the back-alley we first met him in, music pulls him out again.

Richie Finestra went to that alleyway to find a high, and boy did he get it. He got a taste in the drugs he buys, yes, but he found it, that indescribable high, in the music playing just down the street at the Mercer Arts Center. When the entire building collapses, an event that kind of actually happened, you can see Richie’s life do the complete opposite. In the rubble of the performance hall Richie rebuilds himself, puts his mind back together after losing everything. He’s a fucked up phoenix, rising from a beer, sex, and piss stained ashes, realizing his highest highs and lowest lows come not from the money he’ll get from selling his company, or the drugs ruining his mind and marriage, or the actual human lives he took, but from the music. Always from the music.

The Dolls’ David Johansen sang about personality crises while the building fell on top of Richie. But if the smile on Richie’s face as he emerges from the wreckage bleeding but alive is in any in indication, his personality is in crisis no more. 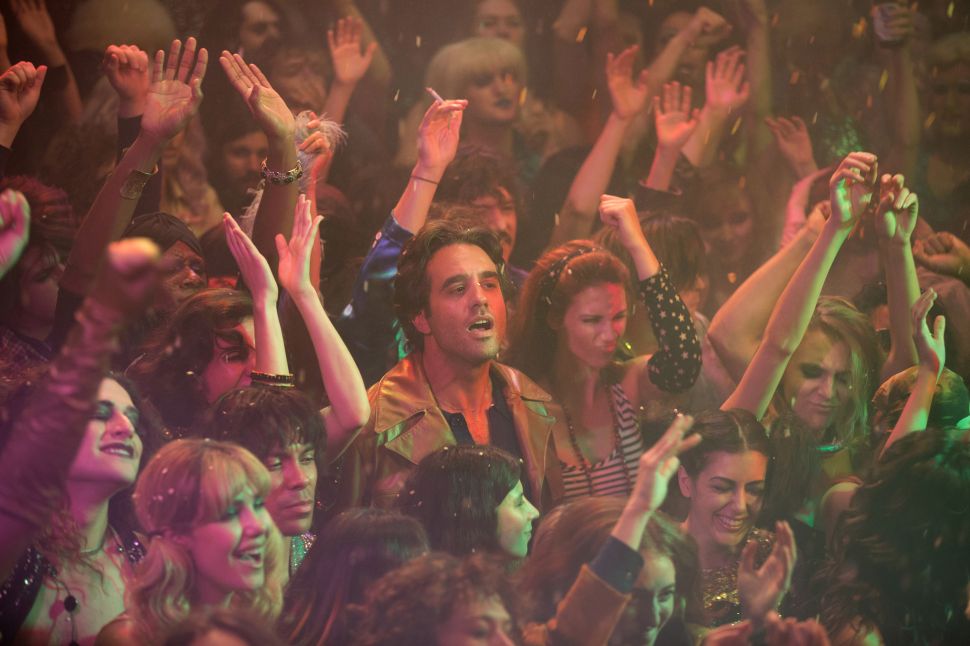