Last week, Rebecca Lee, 30, drank a cup of hot tea before donning her Uniqlo Heattech tank, long-sleeve shirt, cotton sweater, thin jacket, Heattech tights, and snowboarding pants. On top of that, she added her winter Sorel boots, a hat, scarf, gloves, and a long down jacket whose pockets were filled with disposable hand warmers. Lee wasn’t preparing for a winter camping trip or an arctic expedition; she was getting ready for her daily work commute on a bleak 13-degree morning. No mass transit or Uber apps for her. Every day at 6 a.m., Lee slogs an hour from Penn Station to the downtown hospital where she works and then another hour on the way home. “I walk to work, rain or shine, for preventative health reasons,” she said. “There are days when I’m so tired and I don’t look forward to the commute, but health is something that all the money in the world cannot buy.” January’s blizzard and Valentine’s subzero temps highlighted subway-shunning New Yorkers who brave hours of slushy streets and whiplash winds for their daily walk to work—winter weather (and faster transport) be damned. Some do it for the exercise, others to save money, but all walkaholics are stubbornly committed to their prolonged pavement-pounding, one snowy step at a time. The health reasons alone should motivate anyone to go the extra mile. Since starting this route two years ago, Ms. Lee says she doesn’t get sick as much as she used to and even overcame her insomnia. “It used to take me one to two hours every night to fall asleep. Now it only takes me about 10-15 minutes and I wake up refreshed,” she said.

“As the oldest form of exercise, walking is by far one of the safest and most beneficial activities that people can participate in on a daily basis,” confirmed Dr. Scott Weiss, a physical therapist and exercise physiologist who’s worked with the US Olympic Teams and the NFL. He added that beyond improving sleep patterns, walking reduces your chances of cardiovascular disease, type two diabetes, and developing breast and colon cancer. And as Caitlin Teahan discovered, a daily stroll can also boost your mood. She started her daily four-mile commute from Kip’s Bay to the West Village to save money but quickly fell in love with the sights: “The city is beautiful and in the winter the sidewalks are less crowded.” She has only taken public transportation to work less than five times in the last 2.5 years. In fact, Ms.Teahan even trudged through the snow the Monday after January’s record-setting blizzard. “It took me almost twice as long to climb through it all, but I got there!” the 26-year-old senior account executive said. “It was good to get out of the apartment after a weekend inside.” Some even favor the winter chill. Digital Strategist Sidrah Chaudhry, 29, enjoys her daily 50-minute trek from Midtown to SoHo. “I much prefer walking in the winter when I can layer up as opposed to being a sweaty mess before I get to the office in the summertime,” she said. Marni Kleinfield-Hayes, 28, also doesn’t fear a little freeze, thanks to her college days in Ithaca. The advertising strategist walks 3 miles a day from her West Village apartment to her Midtown West office as a way to score some Vitamin D. “It forces me to spend some time outside and catch a glimpse of the sun when all I want to do is hibernate,” she said. “I use a lot of the time to call my friends and family too, which is a good incentive.” Following in their footsteps has major fitness perks too. A recent study from the London School of Economics and Political Science found that people are more likely to weigh less if they regularly engage in high impact walking compared to another vigorous activity like going to the gym. “Walking makes me feel more justified in never going to the gym. I feel like I get a workout every day,” Ms. Chaudhry said. “Aside from keeping my pants from getting too tight, walking helps me relieve stress. It’s my alone time to get away from everything and just think.”

Some New Yorkers are also getting a leg up from technology. According to the NPD research group, retail sales of activity trackers in 2015 grew 110 percent. Tracking her steps with a FitBit gives Ms. Lee an extra dose of motivation: “If I see the number 18,800, I’ll think to myself, ‘O.K., I only have 200 steps until I get to 19,000—let’s go!’ ” The best benefit of a daily schlep, however, may be forgoing the delays, claustrophobia and drastic temperature changes of the subway. Nicole Berrio, 23, will do anything to avoid her crowded 1st Ave subway stop on the L Train, so she hikes 45 minutes each way to her public relations job in Bryant Park. “I always preferred to walk over stuffing myself in a stinky, hot subway car every morning,” she said. “I really enjoy getting fresh air, taking a new route every day, seeing different things I wouldn’t have otherwise seen,” Ms. Berrio added. “I love soaking in the hustle and bustle of the city before sitting in front of a computer screen all day.” 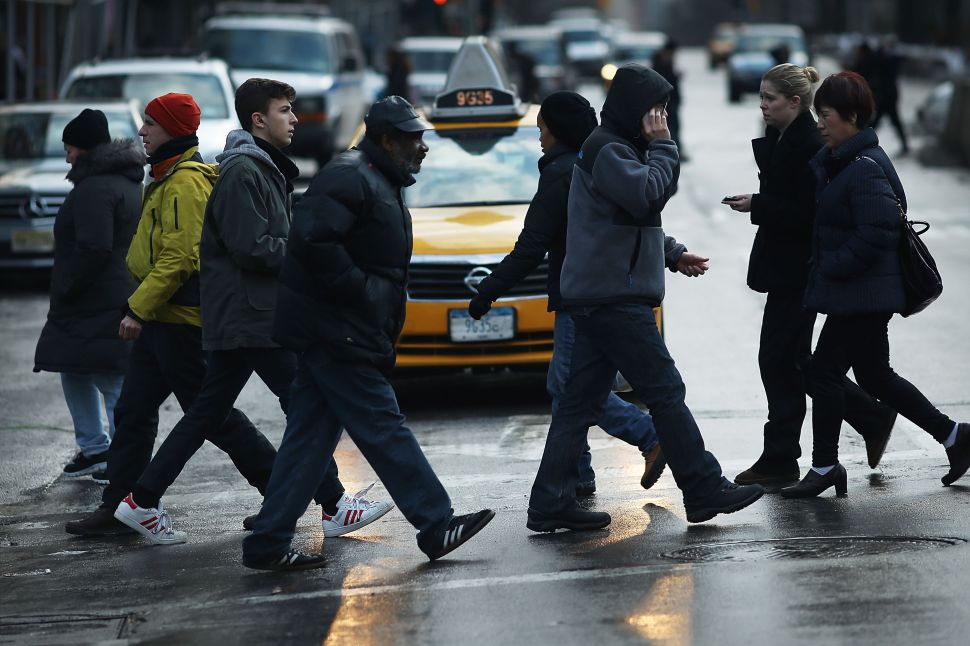