“I think it is very important that he sent the signal that, on the morning after a historic victory—it’s the widest margin we’ve seen in the history of New Hampshire—that he would come to Harlem and have breakfast with me,” Mr. Sharpton told a throng of press outside of Sylvia’s, the legendary soul food restaurant on Malcolm X. Boulevard.

Mr. Sanders did not address the press, but Mr. Sharpton said the two discussed “issues that affect our communities”—with Mr. Sharpton asking “bluntly” about the  poisoning crisis in Flint, Michigan, affirmative action and police brutality and misconduct.

The meeting comes between after primary in New Hampshire—which, like Mr. Sanders’ native Vermont, is overwhelmingly white—but before the Democratic contest in South Carolina, where more than half the state’s Democratic primary electorate is African American. It is a state Ms. Clinton is expected to win, in part because of her strong poll numbers with black voters who have long supported her and her husband, President Bill Clinton.

Mr. Sharpton said he would not make an endorsement today—and will not do so until he and civil rights groups meet with Ms. Clinton, which he said is set for next Thursday. But he appeared with two black leaders who have endorsed Mr. Sanders, former NAACP President Ben Jealous and Harlem State Sen. Bill Perkins, and he indicated that nobody should take black votes for granted—a sentiment perhaps aimed at Ms. Clinton, whose campaign reportedly will shift to focus on systemic racism and gun violence after her loss last night.

“My concern is that in January of next year, for the first time in American history, a black family will be moving out of the White House. I do not want black concerns to be moved out with them,” Mr. Sharpton said. “We must be front and center and not marginalized. And Sen. Sanders coming here this morning further makes it clear that we will not be ignored. Our votes must be earned. Nobody can deliver our votes. None of us are kingpins, but our job is to keep our agenda front and center.”

The pair was inside the restaurant, which is decorated with pictures and portraits of people including President Barack Obama and Mr. Clinton, for about half an hour. They did not eat any of the restaurant’s famed fried chicken—out of deference to Mr. Sharpton’s slim physique and strict diet, he joked—but did each have a cup of tea. 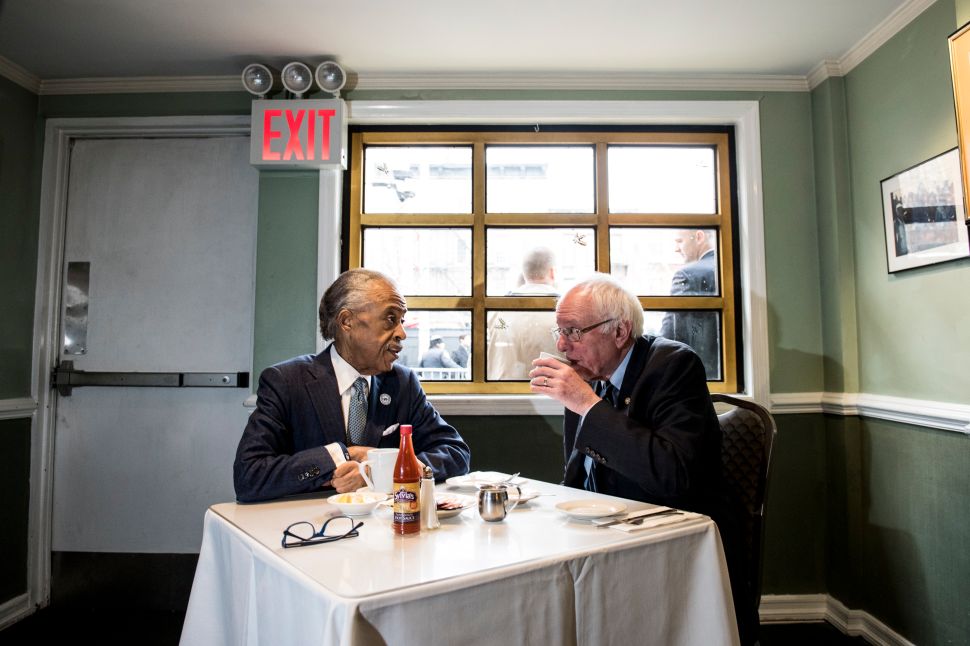